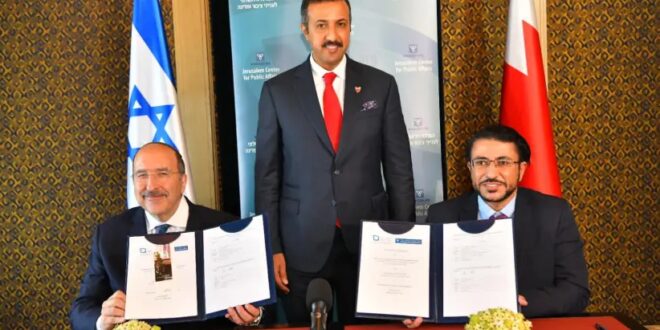 “The JCPOA [nuclear deal] has caused more instigation and extremism in many different regions across the Middle East.”

The 2015 nuclear agreement between world powers and Iran led to greater violence and extremism in the Middle East, Bahrain Undersecretary for International Relations at the Foreign Ministry Dr. Shaikh Abdulla bin Ahmed Al Khalifa said in Jerusalem on Sunday, the first day of a four-day trip aimed at deepening relations between Bahrain and Israel.

The Bahraini official spoke at the signing of a cooperation agreement between the Bahrain Center for Strategic, International and Energy Studies (Derasat), which Al Khalifa heads, and the Jerusalem Center for Public Affairs.

JCPA president Dore Gold said the goal of this partnership and his think tank’s work with a research institute in the United Arab Emirates is “to create an array of cooperation agreements with the countries of the Abraham Accords and to convey a message to the US, Europe and other countries, of a realistic understanding of the challenges that we share – the danger of Iran’s policies in the region and the world.”

In addition, Al Khalifa and Foreign Ministry Director-General Alon Ushpiz will prepare for an eventual meeting between Lapid and Bahraini Foreign Minister Abdullatif Al Zayani, under the auspices of a high steering committee for relations between Bahrain and Israel, which they lead and will meet this week.

The Bahraini official is also expected to meet with the Foreign Ministry’s Cadets Course, to discuss Israel-Bahrain relations, and to visit Israeli civil society organizations and think tanks as part of his goal to strengthen ties between the countries.

Official diplomatic relations between Israel and Bahrain were announced on September 11, 2020, in the framework of the Abraham Accords, after years of mostly behind-the-scenes ties.

Al Khalifa also holds the positions of deputy secretary-general of the Supreme Defense Council and undersecretary for political affairs at the Foreign Ministry in Bahrain, and is in charge of the Israel portfolio at the ministry. He visited Israel twice previously in December 2020, with Bahrain’s foreign minister and minister of economy.

The undersecretary’s official biography says that he is “a fierce advocate for Bahrain’s historical tradition of tolerance, especially for Bahrain’s indigenous Jewish and Christian communities.”