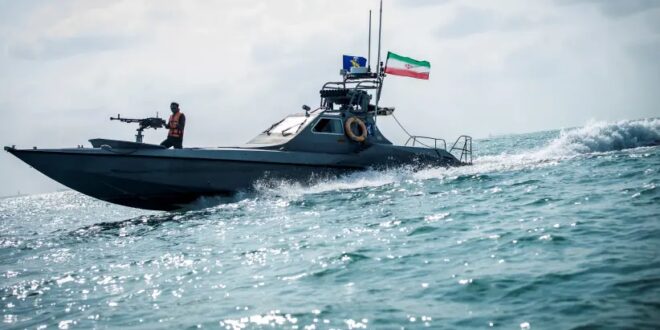 Heat up northern Israel, to show it can strike anywhere it wants if it is pressed about the tanker attack.

Iran is putting in place a new doctrine designed to preempt any response to its attack on a ship off the coast of Oman. In the week and a half since the Mercer Street tanker was first attacked on July 29, and two of its crew members were killed on July 30, Iran has been singled out as a culprit.

The US and UK have accused Iran, and there has been tough talk. Then, suddenly, rockets were fired at Israel last week. This was Iran’s preemption. Heat up northern Israel to show it can strike anywhere it wants if it is pressed about the tanker attack.

It’s important to listen to Iran’s logic and narrative here. Iran has laid that out through media messaging and speeches by its proxies, as well as in meetings with key Hamas, Hezbollah and other terrorist leaders during the inauguration of President Ebrahim Raisi. IRGC head Hossein Salami and key official Ali Shamkhani attended various meetings, and it appears the messaging was put out at the same time.

What was the message? The strike off the coast of Oman was retaliation for previous Israeli attacks, Iran said via Al-Alam TV and Press TV. That means Iran felt it had evened the score. Tough talk from the US, UK and Israel had put Iran on edge. It has warned the UK and Israel. It may have warned the US via other channels.

It appears that the US pressured Israel not to alter the rules of engagement against Hezbollah ahead of another round of Iran nuclear talks next month” the London-based Asharq Al-Awsat newspaper reported, citing a senior diplomatic source.

This is important because it means Iran was able to put Hamas and Hezbollah in play, and possibly units based in Iraq, as well as Iraqi-based militias and the Iranian-backed Houthis in Yemen as part of a concerted regional effort. If Iran feels pressured in the Gulf, then it may strike elsewhere.

But this is not just about striking. They are pushing Hezbollah and Hamas and other frontline actors to create complexity, deterrence and unpredictable results for Israel in the wake of the tanker attack.

French President Emmanuel Macron spoke with Raisi, according to reports on Monday. “The Islamic Republic is very serious about providing security and maintaining deterrence in the Persian Gulf and Sea of Oman Region,” Raisi told the French.

What does this mean? We heard that also in Hezbollah leader Hassan Nasrallah’s recent speech. Hezbollah had responded to Israeli artillery and airstrikes, he said on August 7, adding: “This was to reinforce the old equation of deterrence and not to create a new one, as some have said.”

But what about the fact that Hezbollah had enabled areas it controls to be used for rocket fire on Israel on August 4? Hezbollah had started this round, in a sense. But it also openly said it would continue it, rocket for rocket, against Israel.

On August 1, IDF Chief of Staff Lt.-Gen. Aviv Kohavi concluded a conversation with his British counterpart, Chief of the Defense Staff Gen. Sir Nick Carter. “The two discussed recent events in the region and common challenges faced by both countries,” a press release said.

It appears Iran put in place a preemption doctrine over the next 48 hours after that. Then on August 6, Hezbollah fired a salvo of rockets into an uninhabited border area of Israel.

Nasrallah gave his speech the next day. This is clear, coordinated messaging. Iran has been seeking to deter, to be unpredictable and to put its frontline units, which are its proxies and allies and partners in Lebanon, Syria and Gaza, into play. This is a new preemption doctrine in a sense. Iran wants to present Israel with a multiplicity of threats and frontlines.

It also unveiled this in May during the lead-up to the Gaza conflict. It threatened Israel and had its proxies give speeches in the hours before Quds Day and after, all directed at challenging Israel.

Then Hamas launched some 4,000 rockets in 10 days. Iran openly supported this, and its media celebrated what it thought was an attempt to test Israel. Iran also launched a drone into Israeli airspace on May 18, likely guiding it from Syria.

“Six failed launch attempts were identified from Lebanon that did not cross into Israeli territory,” the IDF said on May 17. More rockets were fired from Lebanon toward Israel on May 19 as the Israel-Hamas conflict winded down.

What this shows is a more complex Iranian response and likely an illustration of more to come. Iran wants to put in play this preemption doctrine. It wants to distract the US, UK and Israel from the incident off Oman and the emerging reports that Washington and London back a response and that London may respond somewhere.