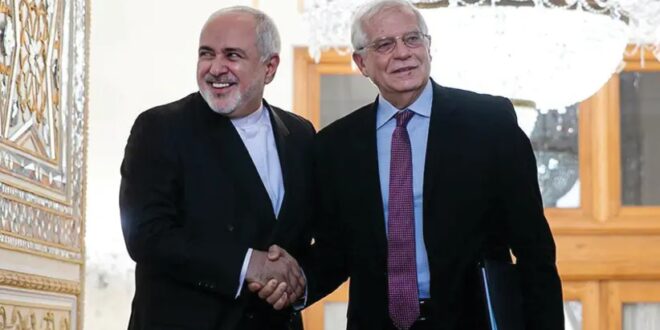 How Iran helped the European Union lose its credibility – opinion

The EU’s Josep Borrell systematically looks the other way for Iran’s human rights abuses, its terror activities throughout the Middle East and its threats against Israel.

After countless EU lectures on human rights and the moral high ground it has taken towards Israel and others, the EU has crossed a line that even most fervent critics and Eurosceptics would have had a hard time to believe.

The drop was when Josep Borrell, EU high representative for foreign affairs and security policy, decided to send an envoy to attend the inauguration of the Iranian President Ebrahim Raisi, aka “the butcher of Tehran.”

Foreign Ministry spokesman Lior Haiat reacted on Twitter by saying that Israel is “puzzled” and recommended the EU to retract its attendance. Israel was indeed puzzled, and so were most Europeans. It was simply hard to wrap our heads around the fact that the EU, the self-proclaimed ultimate human rights defender, failed to draw a line in the most extreme of circumstances: an EU envoy sitting among leaders of terrorist organizations, celebrating the election of a man guilty of the worst crimes against humanity.

Who could have imagined such a shameful event?

Nonetheless the signs were there, piling up slowly but surely.

The EU has been issuing condemnations after condemnations for every arrested activist in Belarus. Borrell is rightfully persisting to stop human rights abuses in Belarus and issued the following tweets: “Shocked by reports that Belarus activist Vital Shyshou has been found hanged in a Kyiv park. He helped many flee the Lukashenko regime’s repression.
Justice must be done.”

Or: “Reassured to see that the athlete Krystsina Tsimanouskaya arrived safe in Poland. One more proud Belarusian has however been forced to flee her own country due to the actions of the Lukashenko regime and Olympic truce been violated.”

But there is a catch for Borrell’s noble endeavor: Belarusian President Alexander Lukashenko has been threatening the EU with a new wave of immigration. Therefore the EU is adamant to expose his crimes in an effort to push back. We can’t say the same for Iran, where EU’s economic interests are more than ever at stake, and therefore the EU is walking on eggshells in order not to jeopardize their accomplishments.

In fact, Borrell has failed to stand up for any Iranian dissident that faces a grim outcome. Even Dr. Ahmad Reza Djalali, a EU citizen no less, who has been incarcerated in Iran on baseless accusations and awaits his death penalty, could only count on an appeasing message to Iran regarding his release. Iranian dissidents and human rights activists implore the EU to stand up to Iran for Djalali, but there’s no one home.

Borrell systematically looks the other way for Iran’s human rights abuses, its terror activities throughout the Middle East, its threats against Israel and even more flagrantly, decided to condemn the recent vessel attack in Oman only after EU envoy Enrique Mora’s attendance was decried.

To portray another apparent discrepancy, Poland and Hungary are constantly being threatened with sanctions for turning into illiberal states. Polish Prime Minister Mateusz Morawiecki and Hungarian Prime Minister Viktor Orban are being snubbed in the EU arena. Hungary’s latest legislation against lesbian, gay, bisexual and transgender people and Poland’s judicial reforms made the EU take the moral high ground by declaring that Hungary and Poland don’t respect EU values. That’s how much Europe supposedly cares about democracy and human rights. But where are EU values when it comes to Iran’s incomparable violations?

Even more absurd, when it comes to Israel’s policies regarding Jewish communities in Area C, the EU reacted in a harsh tone and suggested legal action with the ominous statement: “steps towards annexation, if implemented, could not pass unchallenged.”

Furthermore, the EU does not hesitate to use the terms “humanitarian law”, “international law,” “illegal” and accuses Israel of fueling tensions on the ground. In reality, the EU has been systematically misusing these legal terms to falsely accuse Israel of violating international law in order to pressure Israel into political concessions.

To top it off, the EU takes a softer approach when it comes to Hamas’ human rights violations and indiscriminate rocket attacks against civilians. The terror organization that, contrarily to Israel, actually violates human rights on a daily basis. Mora sitting next to Hamas leader Ismail Haniyeh shouldn’t shock any of us after all.

One would think that threatening a state with “legal action” is a reaction that could better fit Iran’s constant threat in the region and its gross human rights violations. Yet, everyone understood that the EU does not wish to undermine any of its interests with Iran and so Iran’s violations were repeatedly met with silence. Israel, on the other hand, is a safe partner in the background and a safe foe at the forefront in order to secure the left and center-left votes in Europe. Therefore pointing fingers at Israel is a much needed exercise.

Silence is one thing, and remains mostly tolerated. Yet what we have encountered with Raisi’s inauguration winds up to be a totally different ballgame. Staying silent on the fraudulent election of a man that was personally responsible for the killings of more than 1,500 political prisoners is unfortunate, to put it mildly, but sending an envoy to celebrate Raisi’s election, constitutes outright complicity.

By legitimizing this man’s election under the guise of diplomacy, the EU has now lost its credibility not only as a human rights defender but as a reliable partner in all respects.