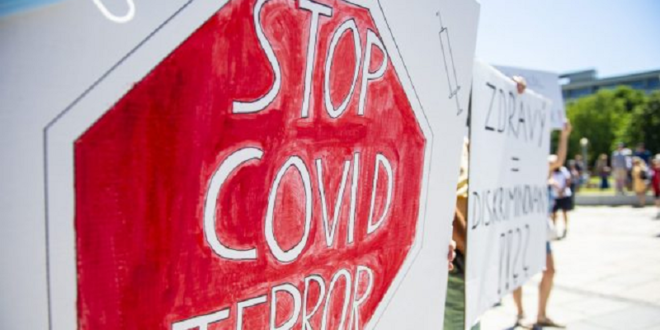 Slovakia Grapples With the ‘Big Business’ of Disinformation

As conspiracy websites mushroom, Slovak fact-checkers hit back at the peddlers of false truths where it hurts them most – in their wallets.

In the midst of Slovakia’s preparations for the impending third wave of the COVID-19 pandemic, the public is still preoccupied with doubts about vaccines and distrust in the authorities. As anti-vaxxers stage protests and swarm the squares of Bratislava, the country’s faltering vaccination campaign is struggling to gain momentum.

Some 70 per cent of EU adults have received at least one jab of the vaccine, according to the European Commission; in Slovakia, this number hovers at around 40 per cent, making it one of the least vaccinated countries in the bloc.

To many, this comes as no surprise. Observers point out that a peculiar “question everything” mentality has taken hold among Slovaks – a reference to the motto of RT, the television channel and website formerly known as Russia Today that’s described by the New York Times as “a case study in the complexity of modern propaganda”.

“There are so many different actors in Slovakia, from politicians to various outlets, that actively peddle disinformation,” analyst Katarina Klingova from GLOBSEC, a think tank, tells BIRN.

According to Klingova’s research, Slovaks are the most conspiracy-prone nation in Central and Eastern Europe, and thus easy prey for peddlers in lies who are on the lookout for both financial and political gain. But independent fact-checkers have found a way to pinch holes in the stuffed pockets of purveyors of disinformation, bringing the fight to the very source of conspiracies.

Money talks
Thousands of slowly expiring vaccines are sitting in warehouses as nearly a third of Slovaks continue to believe that the pandemic “is a planned operation by the hidden forces/elites to control the population”, the GLOBSEC Trends 2021 report reveals.

“It’s a continuous trend,” Klingova explains. “A lot of Central Europeans believe in all kinds of conspiracy theories. On average, 37 per cent think that official figures of people infected by COVID-19 are inflated and that the authorities are lying.”

Slovaks, deeply suspicious of the mainstream media and public health authorities, sit well above that average, with 46 per cent not trusting official COVID-19 statistics, second only to Romania. The share of Slovaks questioning pandemic-related data has risen by 10 per cent between last autumn and the spring of this year – a worrying trend noted by experts and journalists alike.

One explanation for this lies behind the sheer number of alternative outlets available online that claim to be in possession of the ‘only truth’ about contentious matters. “My research has shown an increase in traffic to these websites by several dozen per cent. There are more than 200 such websites in Czechia and Slovakia alone,” Jan Hacek, assistant professor at the Department of Journalism at Comenius University in Bratislava, recently told BIRN.

In 2018, there were 120 such websites in the Czecho-Slovak online space. Today, more than 2,000 pages of lies and hoaxes in Slovak sit on Facebook alone, according to information security expert Tomas Krissak. “Add to that private, closed and secret groups with thousands of members, and the problem becomes more complex and far-reaching,” Krissak tells BIRN.

One such group advocating opposition to vaccination was recently shut down by Facebook. A chunk of its roughly 34,000 members, however, merely dispersed to new groups with a similar purpose. “That’s where the anti-vax hardcore is concentrated,” Krissak explains.

People are curious and automatically click on hate content, which means money automatically flows into the wallets of disinformation peddlers.

The situation has gotten so out of control that even some users flirting with disinformation are in favour of stricter regulation of social media outlets and the rules that govern them, with 71 per cent of Slovaks supporting the notion, the second highest figure in CEE, according to the GLOBSEC report.

“Disinformation has become part of the public discourse,” Klingova argues. “Many politicians have realised that Slovaks react to conspiracy theories, so they employ them more to lure people in and build their political fanbase.”

In Krissak’s estimate, more than half of Slovak politicians and parties try to score points with voters who share a conspiracist worldview. “They represent roughly a third of the electorate,” he says by way of explanation.

But for those spreading lies, money counts even more than political calculations. Klingova points to a study by the Global Disinformation Index, an organisation aimed at defunding disinformation websites, that valued the annual advertising revenue of 20,000 of such sites at 250 million euros.

“Ads and the spreading of disinformation is truly big business. Disinformation is clickbait, often hateful, that aims to evoke negative emotions that resonate with people and sell,” Klingova says.

“People are curious and automatically click on hate content, which means money automatically flows into the wallets of disinformation peddlers,” she adds.

In Krissak’s view, hoaxes and fake news generate large traffic and are attractive to a particular kind of advertiser. “They don’t care about the content on these websites and are often profiting from similar hoaxes – they offer miraculous healing procedures or medicines,” he contends.

“This also widens the gap between a civilised relationship with facts, the truth and the responsibility of spreading information on one hand, and a barbaric dissemination of lies that scare people and make money out of it,” he adds.

However, those adverts, conspiracies’ biggest ally, can also be their greatest weakness, as evidenced by Konspiratori.sk (Conspirators.sk), an online database run by a diverse group of independent fact-checkers who keep a list of problematic Slovak and Czech websites.

The database currently lists 200 such sites that several PR agencies flag to their customers, who then block their adverts from appearing on the dubious websites, stripping them of vital funds.

“It’s an interesting way to fight against disinformation: you attack actors who spread lies where it hurts them the most – in their wallets,” Klingova says.

Foreign interests
Internet advertising is not the only source of money for those wishing to spread disinformation and misinformation; where interests intersect with foreign actors seeking to capitalise on their political interests in the country, there is money to be made. Cutting off these secret flows is proving difficult, though.

“Conspirators who run disinformation operations, be they state-sponsored or private, want to spread distrust and undermine trust in institutions,” says Katarina Klingova, an analyst at the think tank GLOBSEC.

In 2018, the Dennik N daily uncovered the identity of Evgeni Palcev, a Russian with links to a Moscow-run state agency who had been writing articles under a pseudonym for Hlavne spravy, one of Slovakia’s most-read disinformation websites. Though appearing as a conservative daily, the website is in fact a cog in Moscow’s campaign wheel to “undermine democratic values and divide Europe,” Dennik N wrote.

“Palcev was echoing hardcore Kremlin propaganda, such as that Russia had nothing to do with the shooting down of the MH17 passenger plane over Ukraine in 2014,” Klingova explains.

Tibor Eliot Rostas, editor-in-chief of Zem a vek, a well-known conspiracy magazine, was exposed trying to cultivate ties with RT and the Russian state-owned news agency Sputnik, when a leaked recording of him asking the Russian embassy in Slovakia for money to finance a disinformation campaign started circulating online. Rostas was heard inquiring whether Russia was interested in “supporting Slovak people or media who’d be informing readers”.

Hlavne spravy and Zem a vek did not respond to BIRN’s request for comment.

It remains unclear whether the likes of Palcev or Rostas live off financial support from Moscow. “This requires direct evidence, and that’s very hard to come by,” information security expert Tomas Krissak explains. “But if intelligence services were to find out that they had above-standard relationships with Russia or its embassy and that they were relaying Russian propaganda in Slovakia as Russian citizens, then the answer is clear – they are foreign agents.”

While evidence is lacking, similar conclusions about Slovaks being paid by external actors to spread disinformation wouldn’t shock Krissak. “In the Czech Republic, dozens of employees were expelled from the Russian embassy, which led to a drop in the production and impact of Russian propaganda in the country – it shows that they have their troops in the field.”

In Czechia, an international edition of Sputnik has been airing conspiracy theories of the preposterous sort, for example, accusing Ukraine of developing a special serum that makes its soldiers walking zombies which cannot be killed even when shot in the head.

Even so, Sputnik enjoys remarkable popularity in the Czech Republic. “However, around 40 per cent of their visitors are from Slovakia,” Klingova explains, hinting at the tight-knit nature of the Czecho-Slovak disinformation scene. “They are close and cooperate by sharing each other’s content.”

“This makes Slovaks all the more exposed to conspiracy theories and disinformation – they face them not merely at home, but also abroad,” Klingova says.

Another U.S. warship has sailed into the Black Sea, again drawing intense Kremlin scrutiny amid …