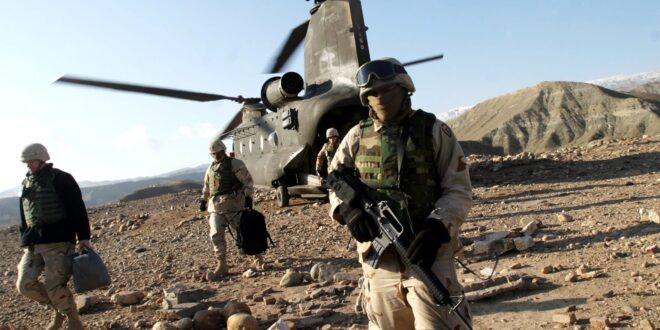 The Pentagon is preparing for a possible evacuation of the U.S. embassy in Kabul, Afghanistan amid fears that the Taliban may overrun the compound in the coming days.

As the Islamic terrorist organization makes significant gains, capturing ten provincial capitals across the country, the State Department will reduce embassy staff and is considering relocating its outpost to the Kabul airport, State Department spokesman Ned Price confirmed at a press briefing Thursday.

“We are further reducing our civilian footprint in Kabul … to a core diplomatic presence in the coming weeks,” he remarked.

Meanwhile, the Pentagon is moving marines into position to cover the evacuation of staff as intelligence reports suggest the Taliban may launch an assault within 30 days, the New York Times first reported. Price suggested that these troops will serve in a mainly auxiliary role for the civilian evacuation rather than to resume military involvement in a counter-attack.

“These incoming forces, these incoming assets will be based at the airport for one reason and for one reason only, and that is to help effect the reduction in our civilian footprint,” Price affirmed. As for American boots on the ground, Price did not specify how many will be sent to assist with this process. He added that “this shouldn’t be read as any sort of message to the Taliban” that the US is anticipating the group’s inevitable takeover of Afghanistan.

A Western diplomatic source told CNN that temporarily moving the U.S. embassy to Hamid Karzai International Airport is “the most probable” course of action. A small staff will reportedly remain at the Kabul embassy while the rest are shifted away from the city center.

The Taliban’s advancements come as U.S. forces have formally withdrawn from the war-torn territory at the direction of President Biden. At a press conference Wednesday, Biden doubled down in defense of his decision to remove U.S. troops from Afghanistan amid the Taliban’s resurgence. He confirmed that the U.S. would continue to send air support and food supplies to help the Afghan army fight the battles against the Taliban enemy but would refrain from directly intervening.

“They’ve got to want to fight,” Biden said. “I think they’re beginning to realize they’ve got to come together politically at the top. But we’re going to continue to keep our commitment. But I do not regret my decision.”

On Thursday, Taliban fighters invaded the city of Ghazni, which is situated about 90 miles south of Kabul, then shortly after continued the offensive into Kandahar, Afghanistan’s second-largest city. The insurgents also reportedly stormed the western city of Herat. A recent U.S. intelligence assessment warns that the Taliban could take over Kabul in the next 3o to 60 days and gain full control of the nation in just months, according to reports.

Secretary of State Antony Blinken reportedly had conversations with Secretary of Defense Lloyd Austin and national security adviser Jake Sullivan recently to discuss strategy to address the security crisis in Afghanistan, a source familiar with the discussions told CNN.

Post Views: 101
Previous Russia denies siding with Ethiopia in Nile dam dispute
Next The U.S. Is Leaving Behind a ‘Nightmare’ in Afghanistan