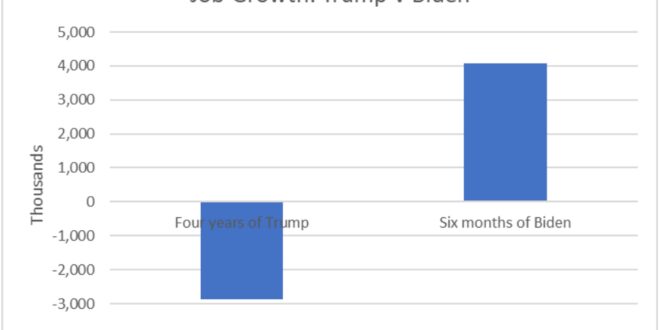 Another jobs report, another cheap shot at the former guy. As I always say, this sort of comparison is silly because so many things beyond the president’s control affect job growth and the economy. But, you know that if the situation were reversed, we would be hearing this comparison endlessly. Donald Trump Jr. would probably even have the graph tatooed on his forehead.

So, here’s where we stand now. After yesterday’s big jobs number, Biden has now created 4.1 million jobs in the first six months of his presidency. Trump lost 2.9 million jobs over his four years in office.

Post Views: 229
Previous Ghost Canaries in the Amerikaner Mine
Next Turkey’s defense minister discusses Afghan security in visit to Pakistan