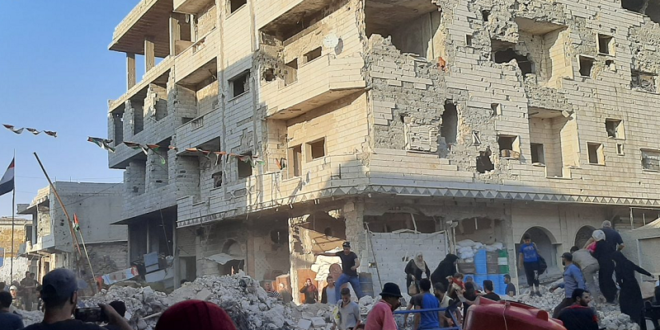 On Thursday, Syrian politicians said that the recent developments in the city of Daraa, south Syria, reveal political and military disputes between Iran and Russia which are settled by their proxies in the region.

Yesterday, cities, towns, and villages in Daraa witnessed a mass strike following a call by local activists to stand by the Daraa al-Balad and the Tariq al-Sad neighborhoods and the internally displaced people’s camps which have been besieged by the government forces and pro-Iranian militias for more than 47 days.

The siege includes intermittent shelling, during which Syrian government forces targeted the residential neighborhood of Daraa al-Balad and the surrounding area.

The UN had already published that 2,500 citizens have been displaced from the city of Daraa because of the violence, while the UN Special Envoy for Syria, Geir Pedersen called on all parties “to adhere to the principle of the protection of civilians and international humanitarian law.”

“There are no factions in Daraa now. There is only one faction which is the Eighth Brigade affiliated with the Russian-backed Fifth Corps which was formed in 2018,” member of the Syrian Negotiations Committee, Ibrahim al-Jabawi, told North Press.

“The Eighth Brigade considers the Iranian factions hostile to it,” Jabawi added.

“The Iranian factions have geopolitical and ideological purposes in the region. They seek to occupy the region in order to control the southern borders,” he stressed.

“King Abdullah II of Jordan had warned of the Iranian presence since 2000 and of the danger of the Shiite Crescent which extends from Tehran to Baghdad, Damascus, and Beirut, for fear of turning south,” he noted.

Jabawi pointed out that the Iranian-backed factions “worked to change the demography of the area through working on spreading Shiism among the residents, especially the weakest among them, who are often in need of material support.”

“There were agreements among Jordan, Israel, and the U.S. on one hand, and Russia and Israel on the other when the Iranian-backed factions invaded Daraa in 2018, provided that these factions and militias should be at least 80 km away from the border with the occupied Golan or Jordan,” he explained.

“Russia may benefit from the presence of these militias to strengthen the government forces in order to control the land,” a member of the Negotiations Committee stated.

However, Iranian-Russian disagreements recently emerged over how to run the region on what contradicts the conditions of the invasion of the south in 2018, according to Jabawi.

“The Iranian factions rebelled a lot, receiving instructions from Tehran and refusing the Russian intervention in their work especially in their attempt to invade Daraa and to impose the siege on Daraa for more than a month,” he considered.

On August 5th, a statement issued by a meeting of tribes’ elders held in the region of Tafas in the western countryside of Daraa, called for stopping the expansion of Iranian militias and Hezbollah in the south under any name and release the detainees.

It also called on the “Russian guarantor” to abide by its commitments and to assume responsibility as a guarantor of the 2018 Southern Settlement Agreement.

“We hear about the reaching of reinforcements of Iranian-backed factions to the vicinity of Daraa al-Balad and the besieged neighborhoods. However, on the ground, the Fourth Division is Iran’s tool in the region,” said Adnan al- Masalma, the Central Committee’s spokesperson in Daraa.

“We know that there is an Iranian project in the region, and the pro-Iranian factions have always disturbed any agreement during the meetings which were held between the Central Committee and the government forces,” he added.

“During the beginning of the siege and the negotiations, Russia did not intervene. However, recently, it started participating in the negotiations seriously,” Masalma noted.

Russia sponsored many rounds of the negotiations which Jabawi described as a “marathon”, but to no avail, and tried to reach a compromise that satisfies both parties.

However, the Iranian factions led by the Fourth Division have always insisted on storming, pursuing, deploying the security points, confiscating weapons, and arresting the wanted.

“All these incapacitate terms were to occupy Daraa, change its demography and empty it from its indigenous residents,” Jabawi stated.