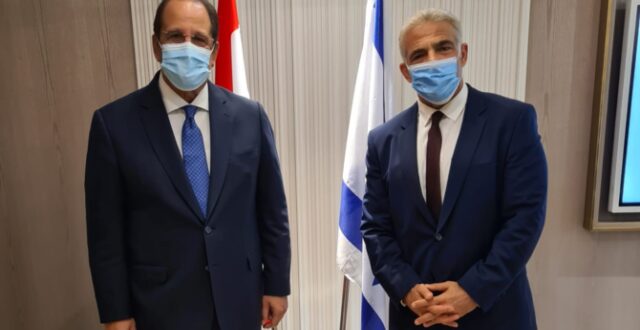 Ahead of anticipated trip by Bennett to Cairo, foreign minister and Egypt intelligence official discuss ways to expand bilateral ties

Kamel’s trip comes two days after two rockets were fired from Gaza toward the town of Sderot in a brief flare-up of violence amid a shaky calm in place since the May war.

Israel has so far avoided responding militarily to the rockets fired from Gaza, due to sensitive ongoing negotiations with Hamas that have the potential to reach a breakthrough, Channel 12 news reported Tuesday.

According to the report, which did not cite a source, there is a possibility of a deal that will allow Qatari funds to enter Gaza and could include the release of the Israelis being held by Hamas.

Following the May conflict, Israel initially said that it would only allow basic humanitarian aid into the beleaguered enclave, unless Hamas released two Israeli civilians it has held in captivity for years, along with the remains of two IDF soldiers. It also conditioned aid for rebuilding Gaza on the matter.

However, in recent days Jerusalem has appeared to soften its stance, gradually scaling back its blockade of Gaza and allowing more and more goods and people into and out of the Strip, at the request of the United Nations and foreign governments.

Egypt helped broker the truce that ended the 11-day conflict in May between Israel and Hamas, the terror group that rules Gaza.

According to Lapid’s office, the two also discussed ways to expand relations between the countries, which enjoy a close security relationship but only minimal civil society ties since their 1979 peace treaty.

Lapid and Kamel brought up the possibility of future collaboration in trade, medicine, agriculture, energy, and technology.

Lapid also underscored the importance of the strategic cooperation between the neighbors for regional stability.

The invitation was relayed to Bennett by Kamel, who met with the prime minister and Defense Minister Benny Gantz. The meeting with the Egyptian spy chief was the first since Bennett took office in June.

Bennett and Sissi had previously agreed to meet when they spoke by phone shortly after Bennett’s government was sworn in.

The visit would be the first public visit by an Israeli premier since 2011, when former prime minister Benjamin Netanyahu met with president Hosni Mubarak in the Sinai resort city of Sharm el-Sheikh. Netanyahu also reportedly paid a secret, unofficial visit in 2018.

Kamel met with Bennett in Jerusalem at the Prime Minister’s Office, which said the two discussed bilateral ties between the countries and “the matter of Egyptian mediation in the security situation vis-a-vis the Gaza Strip.”

Senior defense officials told Zman Yisrael, The Times of Israel’s Hebrew sister publication, that the meeting with Kamel was not connected to ongoing talks over allowing Qatari funds to enter the Gaza Strip.

Kamel’s visit comes ahead of Bennett’s planned trip to Washington, with Egypt seeking to prove to the Biden administration that it plays a key role in securing stability in the region.

Bennett and Gantz held meetings at the military’s Gaza Division Tuesday. According to the network, IDF intelligence officials and the Shin Bet told the pair that they believe a chance must be given for talks to succeed.

Discussing Israel’s position on Gaza reconstruction, a senior Israeli official told The Times of Israel recently that while the main players in the talks mediated by Cairo may be Israel and Hamas, Jerusalem has been adamant that the negotiation table be expanded to include Ramallah.

“We are saying that the PA needs to be part of this equation… because it is the moderate faction,” the official argued.

Israel is hoping this approach will result in Ramallah being tasked with distributing Qatari humanitarian aid in Gaza, the official said, while admitting that the matter is dependent on approval from Hamas and Qatar.