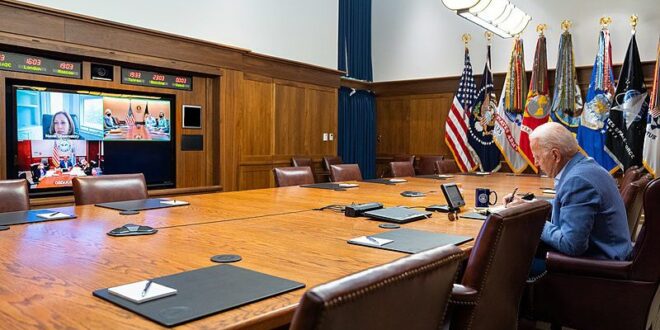 Inept Biden Has Handed Taliban All The Cards – OpEd

Every time US President Joe Biden gives a speech attempting to defend his strategy — or the lack of one — in Afghanistan, he digs himself and his administration deeper into a hole that it will take America a long time to climb out of.

Even though Biden described the Afghanistan evacuation operation as “one of the most difficult airlifts in history” and said that no country in the world other than the US would be capable of projecting this much power, he failed to explain how and why American citizens and US partners and friends are being held behind enemy lines.

A leaked letter from the US Department of State sent to American citizens in Afghanistan instructing them to go to Hamid Karzai International Airport made it clear that the government could not guarantee their safety as they made the trip.

All the roads that lead to the airport are controlled by Taliban militants, who have set up hundreds of checkpoints around the city to control the movement of the people. It is up to them who passes and who gets sent home, even if they have documents proving their eligibility to be on the airport’s premises.

The fate of thousands of Americans and their Afghan partners and friends, who have helped them for almost 20 years, lies in the hands of hard-line militants.

“The Taliban have informed us that they are prepared to provide safe passage for civilians and we intend to hold them to that commitment,” Biden’s National Security Adviser Jake Sullivan told reporters at a White House briefing. How could anyone in their right mind trust a radical Islamist group?

What has happened in the past 20 years that might have led the Taliban to soften their ideology and change their approach? Other than the rise of a new English-speaking generation that uses iPhones and social media platforms and knows how to manipulate the West by saying what sounds like the right thing, nothing has changed at all.

Consequently, a dangerous sentiment has emerged in some Arabic and Western media outlets, along with social media, that the version of the Taliban running the new Islamic Emirate of Afghanistan believes in human rights and tolerance. This narrative portrays the hard-line Islamist group as a movement that believes in moderation, liberty and freedom; therefore it will not be a threat to its neighbors or the wider international community.

The reality on the ground paints a totally different picture.

Reports coming out of Kabul indicate that the militants have been going door to door to find the Afghans who worked with the US, NATO and private foreign companies, threatening their families with interrogation, prosecution and punishment if the wanted individuals do not turn themselves in.

Not far from the airport, the group’s fighters are using force to disperse the crowds of desperate people who are trying to reach their last hope of safety, knowing that the future holds nothing but misery and darkness under Taliban rule.

In his alternative reality, the commander in chief of the US Armed Forces denies that his own people are facing difficulties getting to the airport, as he mentioned during Friday’s remarks. “To the best of our knowledge, the Taliban checkpoints — they are letting through people showing American passports,” Biden said. Meanwhile, several US media outlets known for their support for the president and his Democratic Party reported severalincidents in which the Taliban had prevented American citizens from passing through checkpoints and sometimes even confiscated their passports. During a call with lawmakers also on Friday, Defense Secretary Lloyd Austin confirmed that Americans had been beaten by the Taliban in Kabul.

It seems that every time the president gives a speech or a statement regarding the chaotic US withdrawal and the lack of an exit strategy from Afghanistan, other members of his administration hurry out to explain, whitewash and carefully correct his statements.

Nearly 20 years after a brutal war against radicalism and terrorism began, the Taliban has declared victory over the US and its allies, while celebrating the fact they are holding nearly all the cards against Washington, which allows them to do whatever they want, whenever they feel like it, and wherever they choose.

Post Views: 70
Previous The Return Of The Taliban: Pandemic Lull Of Terrorism In India Will Soon Be Over – OpEd
Next Longtemps cible des intégristes, les soufis libyens sortent de l’ombre