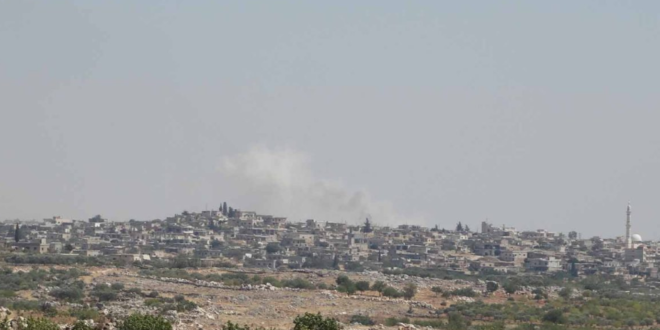 On Thursday, Turkish-backed Syrian factions intensified their artillery and missile attacks on the positions of Damascus government forces in the Idleb and Hama countryside, while the Syrian government bombed the opposition-held areas.

The bombing targeted Khan Sheikhoun, Basqala, Kafranbel Hazarin, al-Malaja, al-Dar al-Kabira, and al-Zaytoun camp, south of Idleb. The factions also targeted the positions of the government forces in the towns of Maasran and Khan al-Sabil, east of Idleb, with a similar bombing.

The sources indicated that the bombardment also targeted the positions of the government forces and their auxiliary forces in the camp and town of Jorin, Ain Salimo, al-Rasif, al-Hassa, and al-Jaid in al-Ghab Plain, west of Hama.

Northwestern Syria is witnessing a continuation of mutual shelling between Syrian opposition factions and government forces, despite the entry into force of the ceasefire agreement signed between Russia and Turkey since March 2020.

The government forces continued their artillery and missile bombardment on the villages and towns of al-Fatira, Kafr Aweed, Sufuhun, Kansafra, Benin, and Ain Larouz in Zawiya Mountain, south of Idleb, according to military sources.

The sources indicated that the bombing also targeted military sites in the villages and towns of Qastoun, Shaghouret, Ziyarah, al-Enkawi, and the outskirts of the town of Zayzoun in the al-Ghab Plain, west of Hama.

On a different note, villages in the countryside of Syria’s Afrin, north of Aleppo, witnessed infighting between two groups of the Turkish-backed al-Hamza Division with light and medium weapons due to a conflict over control of villages in the region.

The Afrin region is witnessing a state of security chaos, amid the inability of the controlling factions to maintain security in the region, especially in light of the almost continuous fighting between the factions on sharing control over the villages of the region.

A group of al-Hamza Division clashed with the group of the dismissed leader of the group, Moataz al-Abdullah, after he took control of the villages of Cholaqa and Fakira in addition to the village of Maratha in the countryside of Afrin, a local source told North Press.

The fighting lasted for more than three hours, and caused a state of panic and fear among the residents of the aforementioned villages, amid the intervention of other groups of the Levant Front and Jaysh al-Sharqiya factions to resolve the dispute, the source added.

The Afrin region has been under the control of the Turkish forces and the Turkish-backed armed Syrian groups since March 2018 after a military operation launched on January 20 of the same year.