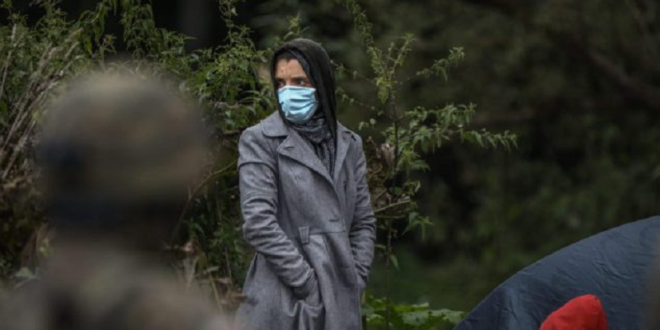 POLAND DELIVERS ANOTHER BLOW TO INTERNATIONAL RIGHTS OF REFUGEES

Poland’s mistreatment of migrants trying to enter via its border with Belarus is seen by legal experts as one further step in the erosion of refugee rights established by international law.

In the village of Usnarz Gorny, on the Polish border with Belarus, scenes as though taken from an absurdist play have been playing out on a daily basis for three weeks. At the border, 32 migrants have been camped out between two lines of border guards: on the eastern side – Belarusians; on the western side – Poles.

When BIRN visited the area on August 24, officials from the ombudsman office’s National Mechanism to Prevent Torture, who had talked to the migrants that morning, reported that one 52-year-old woman had a serious kidney problem, some had colds, all were in bad psychological shape. They had received only bread to eat from the Belarusians the previous day, and were drinking water from a nearby river.

Yet help is just 500 metres away: on the Polish side, a group of activists has been on standby for days, bringing bags with food, water, medicines and thermal blankets (nights are now cold and it had been raining). But a line of Polish border guards constantly blocks access. Not even the medic on the ground, Paulina Bownik, who travels daily from the city of Bialystok about an hour away to check on the migrants, is allowed to pass through.

She told BIRN she was afraid it was only a matter of time before one of the migrants dies.

The day BIRN visited, on August 24, opposition parliamentarian Franciszek Sterczewski asked to be let through with medicines, but to no avail. In the afternoon, the politician unexpectedly sprinted through the lined-up border guards carrying a blue bag with medicines, but was quickly encircled by soldiers halfway to the border. Another opposition MP asking to deliver medicines, Katarzyna Kretkowska, was also denied access, as BIRN witnessed.

All 32 migrants in the group stuck on the border, some of whom claim they are from Afghanistan, have repeatedly indicated they want to apply for asylum in Poland.

The Polish government, however, argues they are currently on Belarusian territory, meaning they should apply for asylum in that country. It refuses to register any asylum claims from individuals in the group or provide them with any assistance.

The situation of the migrants in Usnarz Gorny is just the tip of the iceberg in what observers claim to be systematic breaches of refugee rights by Poland, especially via pushbacks, which evidence suggests the government has been conducting for the past few weeks.

While legal experts are adamant that the pushbacks by Poland are contrary to refugee rights established under international law, these actions are happening in the context of several governments and the EU as a whole chipping away at the international refugee protection system, especially since 2015.

The Polish case, then, represents an accentuation of this trend. And the international response to it will impact the future of the refugee protection system, say experts.

Pushbacks
The 32 migrants in Usnarz Gorny are part of a migrant crisis being fomented by the autocratic leader of Belarus, Aleksandr Lukashenko, in retaliation for the EU imposing sanctions on his regime for a rigged presidential election in 2020 and a subsequent violent crackdown on demonstrators.

Since July, the autocratic regime has been encouraging people mostly from the Middle East and Afghanistan to travel to Belarus with the aim of sending them over its western borders into the EU.

While their situation is extreme, the 32 migrants in Usnarz Gorny are not the only ones who allege that they have been denied the right to claim asylum in Poland.

Three Iraqi migrants interviewed earlier this month by BIRN at the border area claimed to have been repeatedly pushed back into Belarus by Polish border guards despite indicating they wanted to request asylum in Poland. Similar claims were made by other migrants allegedly from Iraq and Afghanistan whom activists met in a forest near Usnarz Gorny last week. Journalists in Belarus report having met migrants in Minsk who also claim they were repeatedly pushed back by Polish border guards.

According to data made public by the Polish Interior Ministry, between August 1 and 18, some 2,100 migrants tried to enter Poland via Belarus, out of whom 1,342 were “prevented from entering”.

Prime Minister Mateusz Morawiecki, speaking on August 24 in Kuznice, a border point 30 kilometres away from Usnarz Gorny, said almost 3,000 migrants in total had attempted to enter the country so far. Of these, about 700 were now in closed refugee centres, Morawiecki said, leaving the others unaccounted for.

Morawiecki also claimed the vast majority were from Iraq, in spite of media, NGO and locals’ accounts indicating a much wider group of countries of origin, including Afghanistan.

“They are on the Belarusian side and Belarus is fully responsible for them according to international law,” Morawiecki claimed during the press conference.

On August 20, the Polish government published an “implementing act”, which is not a proper law but an act amending a previous COVID-related law, that says it can return to the border any migrant caught in the vicinity of the border inside Poland. The act made no mention of the right to claim asylum.

“Unfortunately, we have evidence that the Polish government is conducting pushbacks against many refugees,” Sterczewski, the MP from Civic Coalition, told BIRN in Usnarz Gorny.

“Last night while driving, we met an Iraqi man who told us he had been sent back several times into Belarus by Polish border guards. In that particular case, we were able to ensure that the man could register his application for asylum, but such people are many, it could be in the thousands,” he said.

“This is against the law,” Sterczewski stated. “And it can’t be that the Polish government can use such a low-level piece of legislation to override international law, such as the Geneva Convention or the Polish Constitution.”

Marta Gorczynska, a human rights lawyer cooperating with the Polish Helsinki Committee, tells BIRN that she and her colleagues are now collecting evidence of individual cases of pushbacks with a view to suing Poland in the relevant national and international courts. She said the implementing act passed by the Polish government has no value, since it contradicts national legislation and the 1951 Refugee Convention.

Elspeth Guild, an expert in migration law from Queen Mary University of London, says there are three levels of international law, all of which stipulate that Poland should assess any claim for asylum lodged inside its territory, even on the border, on a case-by-case basis: the Geneva Convention (United Nations legislation), the European Convention on Human Rights (Council of Europe legislation) and the Dublin Regulation, a cornerstone of the common European asylum system (EU legislation).

“Nowhere is it lawful to push anyone back. It’s unlawful under the Geneva Convention, under the common European asylum system, and under the European Convention on Human Rights,” Guild says, adding that currently only a minority of EU countries engage in such actions.

“The implementing act passed by the Polish government only has a legal value if the individual has not expressed a claim for asylum. If they did express a will to apply, this implementing act cannot apply,” she says.

Erosion of rights
In response to BIRN enquiries about the situation at the border, a spokesperson for the European Commission said the EU executive was monitoring the situation in Poland.

Under the Schengen Borders Code, the spokesperson explained, external borders can only be crossed at official border-crossing points, and the Code requires border guards to carry out border surveillance with the aim of preventing and discouraging persons from circumventing checks at border-crossing points.

Guild retorts that the European Commission “is giving only a partial and misleading explanation of EU law” with this reply, as the Dublin Regulation calls for all asylum claims to be assessed, even those not lodged at official border crossing points.

In his press conference at the border, Prime Minister Morawiecki boasted that the European Commission had “thanked” Poland for protecting the EU’s external border.

Since Belarus began sending migrants into Latvia, Lithuania and Poland, the European Commission’s position has been one of at least tacitly endorsing national governments’ efforts to beef up their borders. While at least rhetorically the European Commission insists the rights of asylum seekers must be respected, some of the measures being taken by governments like the Polish one – including pushbacks – make it impossible to respect those rights.

Ever since over a million Syrian refugees, migrants and others flowed into Europe in 2015, an increasing number of EU governments have taken measures that are in breach of international law on the protection of asylum seekers, without suffering significant consequences. The political direction from the biggest capitals has clearly been one of tightening up the EU’s external borders, even if at the cost of refugee rights.

Several countries, including Hungary, Greece, Spain and Bulgaria, have been building walls or fences along their borders. The EU is signing deals with “third countries”, such as Turkey or Libya, to return migrants there instead of offering them asylum in Europe. And the EU has financed detention facilities for migrants in Libya, where claims of inhumane conditions, including torture, abuse and human rights violations, are rife.

In 2020, Greece temporarily suspended registering asylum claims. The European Commission itself considered including in the EU’s New Pact on Migration and Asylum provisions that would allow countries to temporarily suspend registrations if confronted with exceptional circumstances, a BIRN investigation revealed.

Marta Gorczynska, who is currently researching the topic at Warsaw University, says even rulings by the European Court of Human Rights (ECHR) have become less favourable to migrants.

Elspeth Guild points to a particular 2020 ruling by the ECHR that she says represents a backward step when it comes to refugee protection: last year, the ECHR ruled that Spain was not in violation of European law when it returned to Morocco migrants who had scaled the border fence at the Spanish enclave of Melilla in northwest Africa in 2014.

Guild says the ruling is “unfortunate”, as it now allows some governments, such as Greece and Italy, to say they have a legal basis for pushbacks. “I think there has been a horrible campaign by interior ministries and Council of Europe states to beat up on the judges,” Guild says, referring to pressure on ECHR judges to show less leniency over asylum claims.

The law professor also alleges pressure is being exerted by five or six “hardline governments”, including Poland’s, inside DG HOME (part of the EU executive in charge of border policies) to incorporate proposals in the New Migration Pact that would diminish the rights of asylum seekers and are incompatible with the Geneva Convention.

The trend is likely to continue, as countries are now gearing up for the expected arrival of many Afghans fleeing the Taliban regime.

However, even within this international context, Guild holds that the Polish government won’t be able to continue to violate refugee rights on such a scale for long. She highlights how international reaction to the issue is gathering force. Indeed, on August 25, the ECHR issued an interim ruling calling on Poland to provide water, food, medicines and temporary shelter to the migrants (so far, Poland is refusing to implement it).

The Council of Europe Commissioner for Human Rights and the United Nations High Commissioner for Refugees (UNHCR) have now appealed to Poland to allow aid through and enable the migrants to apply for asylum.

“The UNCHR statement does tie the hands of the EU bureaucrats when they come back from the holidays. If the UNHCR says this is terrible, it’s not your job in Brussels to say this is okay. Respect for the 1951 Convention is written in the EU Treaties,” Guild says.