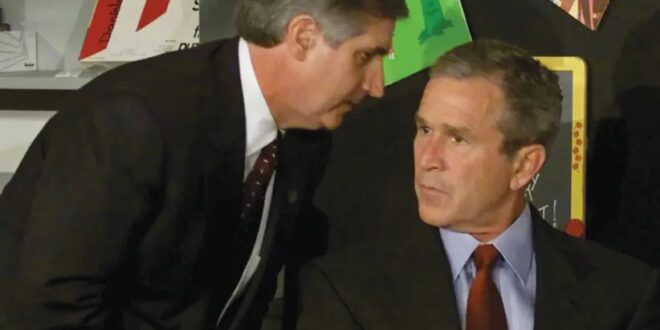 MIDDLE ISRAEL: The enemy that struck 20 years ago tomorrow will not be defeated until called by its real name, and confronted jointly by all its targets.

“Good evening,” a stern-faced George Bush told a stunned American nation 20 years ago tomorrow. “Today,” he said, “our way of life, our very freedom came under attack,” and thus suggested that Islamism’s war is on the West.
It isn’t.

Like Pearl Harbor 60 years earlier, September 11 would also live in infamy, as Franklin Roosevelt said of the Japanese attack, and it too made every American feel personally attacked. Yet that is where the similarities end.

In 1941 the US faced a country that unleashed a conventional army driven by an imperial agenda. In 2001 the US faced neither a country nor an army, and its attackers’ aim was not to expand an existing empire’s borders, waters or resources.

Instead, the new enemy lacked a country, a government or an army, deployed a handful of minimally armed warriors, and was driven by a religious faith, or rather its most fanatic version. This much the American people were not told. Instead Americans were told they were fighting “the war on terror.”

It was like telling the British during the Battle of Britain that their enemy is not Nazism, but the Messerschmitt. Now, as the war enters its third decade it is time to call the enemy by its name, define the war’s cause, harness its allies and declare its aims.

THE ATTACKS of September 11 were not aimed at the free world, and presenting them this way, while making Westerners feel righteous, distances Islamism’s defeat.

Yes, the enemy that targeted the Twin Towers, the Pentagon and the White House has also waged attacks in countless other locations across the free world, from London, Paris and Madrid to Ottawa, Melbourne and Burgas, Bulgaria.

owever, it has also struck in non-democratic bastions like Russia and China. Why then call it what it is not?
This is not a war over the Western way of life. It is a war on mankind. The war’s masterminds want all people to believe in what they believe, to live as they live, and to replace any minimally tolerant government with fanatics of their own ilk. Until they reach this goal, any other member of the human race is to them fair game.

That is why Islamist violence has already struck in the world’s six continents and also in its one subcontinent, and that is why Islamism’s gunners and suicides have also targeted multiple Muslim-majority countries, from Egypt and Turkey to Indonesia and Pakistan.

This is, in short, a world war, and that is what it should be called: World War III. And just like Churchill and Stalin were not united by a shared idea, but by a common enemy, this war, too, is not about the high ideal of freedom, but about the low common denominator of self-defense.

The previous war was against fascism. This war, which also brings together democracies and autocracies, is against Islamism, a system of thinkers, preachers and gunmen that, like fascism before it, is out to impose itself on the human race.

Yes, the Islamist menace is disjointed and also inconsistent. Al-Qaeda, ISIS, Boko Haram, Taliban, Hamas, the Abu Sayyaf jihadists in the Philippines, the Pattani Islamic Mujahideen of Thailand and Somalia’s Al Shabaab are all very different and independent groups, and all these are different from Iran’s Shi’ite ayatollahs and their offshoots in Lebanon, Yemen and Iraq.

Still, Islamism’s varied crusaders do add up to one threat with a common inspiration, and they do collectively destabilize the rest of the world by steadily hammering at the international system’s foundations.

Thus defined and named, mankind’s management of this war must radically change, once its leaders understand the other two misconceptions with which World War III has been fought in its first two decades.

The impression that Islamism’s war is on the West was enhanced by NATO’s joining America’s war in Afghanistan. There was logic in this enlistment, as America’s allies genuinely felt that the attack on the US was an attack on them.

However, Islamism has shown, in both word and deed, that its target is the entire human race. It follows, that the US must replace its Western-dominated, anti-Islamist alliance with a global alliance that will be led jointly by the US, India, China and Russia as well as Indonesia, as the world’s largest Muslim-majority country, Egypt, as the largest Arab state, and France, as the Western land with the largest Muslim minority.

These seven countries have all been victimized by Islamist violence, and all of them view it as a strategic threat. Yes, there already is intelligence cooperation between them and many other countries surrounding the Islamist scourge. However, it is done under the radar, as some of these seven belligerents are reluctant to raise this war’s profile and appear in one front with some of its allies.

Now these countries should announce the establishment of a joint operation that will pool intelligence on Islamist subversion worldwide. That is how the war’s “who” misconception will be addressed.

The war’s “how” misconception was about its tactics and aim. The foolish tactic was to let the conventional army lead the war on the Islamist scourge. Tanks, jets, howitzers and submarines were good for fighting Hitler, but for World War III they are irrelevant.

Islamism will be defeated by undercover agents who will intercept its terrorists’ plots, special units that will hound its leaders in their homes, and educators who will puncture its missionaries’ mystique.

Yes, like the previous world war, this one’s allies will also not shed their rivalries, suspicions and mutual revulsions. They will, however, deliver Islamism’s defeat.

Post Views: 101
Previous What does the Deraa surrender mean for Iran and Russia in Syria?
Next 9/11: US and Israel learned to stop attacks, but not terrorist groups – analysis