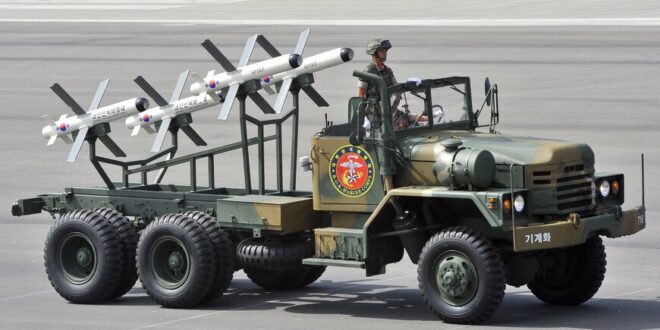 While prospects for actual conflict use are slim, Belgrade hopes that by buying Israeli weapons it can alleviate some of the pressure it may face from Washington over Kosovo and ties with Russia and China.

Israel’s defense industry just added another buyer to its list. Speaking to the Serbian national TV broadcaster, the RTS, the regional director for the Israeli defense company Rafael Advanced Defense Systems Al Zaher said, “We are acting in Serbia together with state-owned defense products manufacturer Jugoimport-SDPR, and we are working on the promotion of SPIKE LR2 rockets.”

SPIKE LR2 is an anti-armor missile currently used by 26 armies worldwide; it offers tactical precision for air, ground and sea. This is not exactly a surprising development. Serbian President Aleksandar Vucic told The Jerusalem Post in March 2020 — after speaking at the annual conference of a powerful pro-Israeli lobby, the American Israel Public Affairs Committee (AIPAC) — that Serbia intends to buy weapons from Israel. However, there are wider political considerations for Belgrade beyond an ordinary defense transaction.

Why is Serbia buying these missiles from Israel? The No. 1 reason is that Serbia is modernizing its defense arsenal that is outdated, as most of it originates from the days of former Yugoslavia. In that endeavor, Serbia has not been politically picky when it comes to the source of its new weaponry. Serbia is buying drones from China, and Mistral — an infrared man-portable air-defense system — from France. Serbia is modernizing its air-policing capability by receiving MIG-29 fighter jets from Russia and Belarus. Between 2008 and 2018, the United States was the largest military donor to Serbia, followed by China. West or East, Europe or the Middle East, it makes no difference to Belgrade.

Can this weapon be used in a hypothetical armed conflict? Over the past several years, Serbia and neighboring Croatia have been involved in a quasi-arms race. Some of the weaponry Croatia has acquired, like Panzerhaubitze 2000 howitzers from Germany and Bradley fighting vehicles from the United States, have a potential combat utility in lowland Serbo-Croatian borders. In theory, Israeli anti-armored missiles are a good equalizer. However, the actual renewal of armed hostilities is unlikely. Serbia is geographically encircled by NATO countries. While Serbia is not a NATO member, it is a member of NATO’s Partnership for Peace program, implementing the Individual Partnership Action Plan, the highest cooperation a non-member can have with the alliance. Moreover, Serbia and the rest of the Balkans are socio-economically stagnating and in demographic decline, meaning they have very little interest and even fewer capacities to launch and wage war. So the arms procurements in the Balkans are, most frequently, ways to lash out against neighbors to score nationalist points with the domestic audience.

Therefore, it is evident that buying SPIKE missiles is not driven solely by military considerations but that there is a political background. Namely, weapons like SPIKE missiles allow Serbia to increase its bargaining powers with both the West and its neighbors. If Serbia has the military capacities that are potentially applicable in more localized Balkan conflicts, both the West and Serbia’s neighbors might feel more inclined to be more accommodating toward Serbia when negotiating regional disputes, like the status of Kosovo. Therefore, equipment like SPIKE missiles can be perceived not as instruments of destruction but as tools of the powerplay.

Serbia is also buying missiles from Israel to remedy a problem it has in its bilateral ties with Israel. Namely, in 2020 as part of the economic normalization agreement mediated by former US President Donald Trump, Kosovo and Israel agreed to recognize each other, and Kosovo agreed to open an embassy in Jerusalem, with Serbia vowing to move its embassy from Tel Aviv to Jerusalem. However, while Serbia’s main rationale in signing this agreement was getting close to the Trump administration, the move to Jerusalem makes no sense for Serbia with Joe Biden in the White House. Moreover, Serbia fears that moving the embassy to Jerusalem will complicate its relations with the Islamic world and the EU. While Serbia wants to avoid the costly move of its embassy to Jerusalem, it does not wish to poison ties with Israel. Therefore, defense contracts help improve relations with Israel amidst Israeli recognition of independent Kosovo and help avoid the embassy move.

Ultimately, Serbian advocates of the SPIKE missile transaction with Israel as a means to cultivate influential leaders in pro-Israel advocacy groups in the United States. Namely, Serbian leadership tried to pivot to the United States and resolve the Kosovo dispute with assistance from the Trump administration. Now, Serbian leadership fears Biden’s presidency, as it expects that Biden will be tougher on them, as well as on the democratic backsliding and ties with Russia and China. Indeed, the Biden administration has already expressed a desire for Serbia to recognize Kosovo. The Serbian government hopes that by doing business with Israel, its lobby in Washington will help alleviate some of the potential pressures by the Biden administration. After all, getting access to US policymakers via pro-Israel interest groups has been one of the reasons why Serbian President Vucic spoke at the AIPAC conference in March 2020.

It remains to be seen whether the SPIKE missile talks will bring the desired benefits to the Serbian leadership. However, this move does show that the Serbian government will continue doing business with Israel. The ones who ought to be most happy are Israeli defense firms — they are about to get a new customer.