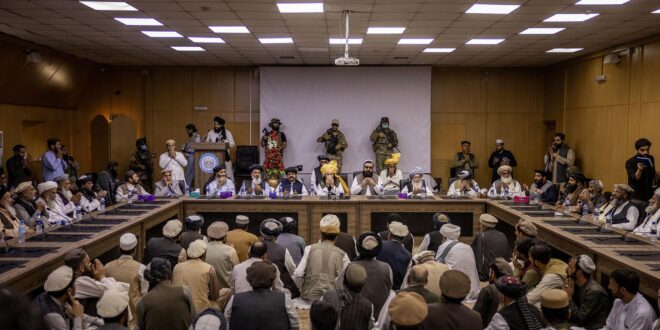 How will the U.S., international community and the region engage with a government comprised of Taliban stalwarts?

As part of the Taliban’s bid to re-establish the “Islamic Emirate of Afghanistan,” the militant group announced the line up for its caretaker government on Tuesday. Despite several leading Taliban figures saying the movement would govern in a more moderate and inclusive fashion, the acting appointments made this week were mostly old guard members who played similar roles when the group ruled Afghanistan in the 1990s. USIP’s Andrew Watkins discusses who the key players are, what it signals about the Taliban’s commitment to inclusivity, the key challenges the government will face and how the West and regional countries should engage.

Who are the key players in the Taliban’s caretaker government?

The Taliban’s newly announced caretaker government consists entirely of members of their movement’s senior leadership. No women were named, nor were any prominent politicians associated with the previous government, in spite of publicly lauded meetings the Taliban has held with figures such as former president Hamid Karzai or chief of reconciliation efforts Abdullah Abdullah.

Thirty out of 33 figures named to senior positions are ethnic Pashtuns, even though they only comprise an approximate 40-45 percent of the country’s population. In spite of the Taliban’s claims to have diversified its membership across all ethnicities and this summer’s lightning-fast campaign that seized northern, non-Pashtun majority areas of the country, the cabinet’s makeup reflects the longstanding ethnic imbalance at the highest levels of Taliban leadership, which have remained largely consistent since the movement’s foundation.

The prime minister, Mullah Mohammad Hassan, is less well known to international observers but is well-respected within the Taliban as a close confidant of founding leader Mullah Mohammad Omar and has chaired the Taliban’s leadership council through most of its insurgency. Hassan’s first deputy prime minister is Mullah Abdul Ghani Baradar, one of Taliban’s three deputy emirs and head of their political office in Doha, Qatar. The other two deputy emirs were also named to vital posts: Sirajuddin Haqqani, one of the FBI’s most wanted men and leader of the notorious U.S.-blacklisted Haqqani network, is now interior minister while Mohammad Yaqoub, famous in the movement as the eldest son of Mullah Omar, will head the defense ministry.

The Taliban’s emir, Sheikh Haibatullah Akhundzada, did not have his role explicitly announced or explained at the press conference announcing the caretaker government, but Taliban figures present affirmed that the entire government would be overseen by Haibatullah. Immediately thereafter, Taliban traditional and social media channels began to celebrate the restoration of the “Islamic Emirate of Afghanistan,” the same name as the Taliban’s regime that ruled most of the country from 1996-2001 and the title the group applied to itself throughout their insurgency.

What can we gather about intra-Taliban rivalries given the composition of the caretaker government?

There has been a great deal of speculation on the degree of debate or even infighting — as some have characterized it — between different figures and elements within the Taliban over whom should receive which positions. Yet the movement’s deliberations on forming this caretaker government were characteristically opaque, and to date there have been no clear signs to the outside world of anything other than a united front among the Taliban’s top ranks.

Ministries have been allocated, in large part, in accordance with the roughly equivalent roles that leaders currently hold in their Rahbari Shura (Leadership Council). Haqqani and Yaqoub were already splitting authority over the Taliban’s military and security affairs across the country, an arrangement that their designation as ministers appears to solidify. While a few announcements appeared to signal demotions or promotions of certain individuals, every figure named to the Taliban’s caretaker cabinet is already a member of the group’s Leadership Council, and a great many of the new appointees held senior positions in the Emirate of the 1990s.

Indeed, for any perceived imbalance in the Taliban’s new cabinet, such as the heavy representation of figures from certain tribal confederations rooted in southern Afghanistan (versus other power bases for the movement like the southeast or eastern regions of the country), these imbalances have long existed in the Leadership Council, the composition of which seems to be largely upheld by official appointments.

One of the only notable new trends is the weight that appears to have been given to individuals with experience serving in an Emirate ministry in the 1990s. A few high-profile military commanders, notable for their sway over the group in its insurgency phase, were left without positions in a cabinet that only offers a few security-focused roles.

The Taliban’s caretaker government should perhaps not be considered “spoils of war” to be bitterly divided up among factions, as different iterations of the U.S.-backed Afghan government often were. Instead, it should be seen as an exercise in legitimizing and elevating the wartime insurgency roles held by many in the Leadership Council to the status of a sovereign government’s ministries.

What does the government’s composition signal about the Taliban’s willingness to ensure inclusivity of women and ethnic minorities moving forward?

The Taliban did not appoint any women to their new cabinet, only a few ethnic minorities — and even those were already senior figures within the movement itself. International and Afghan civil society calls for inclusivity were meant to encompass ideological and institutional affiliation as well as social demographics, but there was no gesture toward inclusivity on either count from the Taliban.

When asked about the Taliban’s repeated promises over the past year that they sought to form an “inclusive government” that would serve all Afghans, their spokesperson only replied that these appointments were temporary — but did not say how long the government would serve or what would precipitate its change. Some observers noted that the establishment of the Taliban’s original Islamic Emirate in 1996 was also couched in language of transition and temporary status, though its structure was not altered greatly until its toppling by the U.S. intervention in late 2001.

How the Taliban are judged in terms of their engagement with — and treatment of — women and ethnic minorities may have less to do with cabinet-level appointments and more to do with their treatment on the ground. To date, the record across the country is mixed but concerning. The Taliban provided assurances of safety and dedicated security for the celebration of the Shia Muslim holy days of Ashura in Kabul and held meetings with representatives of Afghan Sikh communities, but a number of reported detentions and killings have taken place in regions populated by the historically persecuted Hazara ethnic minority. Girls in some areas have been permitted to resume attending classes (and even private universities under new gender segregation guidelines), but in other areas they remain halted or restricted. Women in some industries, especially health care, have returned to work with the Taliban’s encouragement, but many have also reported intimidation and instructions to return home. Public demonstrations in Kabul and large cities, especially those led by women protesting for women’s rights, have been met with Taliban warnings to disperse, gunfire and in some cases beatings.

A range of Taliban statements have suggested that current restrictions, especially regarding women, are only temporary and in place due to the security environment (or even, in one spokesman’s admission, due to concerns about Taliban fighters’ own behavior). Shortly after the caretaker government was announced, Taliban media declared that public protests must be announced and approved by the Interior Ministry in advance.
What are the immediate, key challenges facing the Taliban’s emerging government?

The greatest immediate challenges the Taliban face are economic and humanitarian.

Afghanistan was already facing multiple humanitarian crises before the Taliban returned to power: forced displacement due to conflict, rising poverty and severe food insecurity, the lingering impacts of COVID-19 and a regionwide drought.

At the same time, a great deal of foreign funding and assistance, on which the previous Afghan government was heavily dependent for the last 20 years, has been put on hold by the World Bank and other international institutions — as have most of the previous government’s liquid assets, which are currently frozen by the U.S. government.

The Taliban have admitted in their own public statements that they were surprised by the speed with which the Afghan government collapsed, allowing them to enter Kabul. As they attempt to suddenly transition into national governance after several decades of a militant insurgency’s perspective, they also likely perceive a number of threats. These include an armed resistance front based in the Panjshir Valley, which the Taliban claim has been defeated yet remains unverified, but also the local branch of the Islamic State, which proved its continued ability to wreak death and destruction in a deadly bombing against the Kabul airport amid last month’s evacuation effort.

How the Taliban address each perceived threat will likely vary and could evolve over time, but the swift military campaign to crush the resistance in Panjshir suggests that military priorities and concerns regarding this movement will likely remain paramount in the near term.

How can the United States, NATO and regional countries manage engagement with the new government?

The United States, its allies and regional countries should postpone, for the time being, the more controversial policy deliberations over whether or not to recognize or formally engage with the Taliban and its caretaker government. International efforts should focus on the resumption — and intensification — of humanitarian aid to the country. The next priority should be determining feasible means of resuming critical development funding for non-political civil servants (especially teachers, health workers and other essential sectors such as public infrastructure). Concerns in U.S. Congress and European parliaments about providing funding and assistance that may benefit the Taliban are valid, but there are essential services and salaries that have been entirely funded by Western states for most of the last twenty years.

Donor states should begin untangling the potential legal restrictions and ramifications of engaging with the Taliban’s new government, twenty members of whom are subject to U.N. sanctions. Humanitarian and development assistance should be swiftly resumed to the greatest extent possible, as neutrally and independently as possible.

Regional states should stand ready to support the Taliban in stabilizing its control over Afghanistan’s borders and help ensure that commercial pipelines into the country continue to deliver essential goods and basic commodities. They should engage with the international community and the United States to try to build consensus on how to best influence the Taliban’s new government to ensure and provide safety, stability and just representation for all Afghans.

Post Views: 94
Previous Why Serbia wants to buy SPIKE missiles from Israel
Next After Taliban Takeover, Can Afghanistan’s Economy Survive?