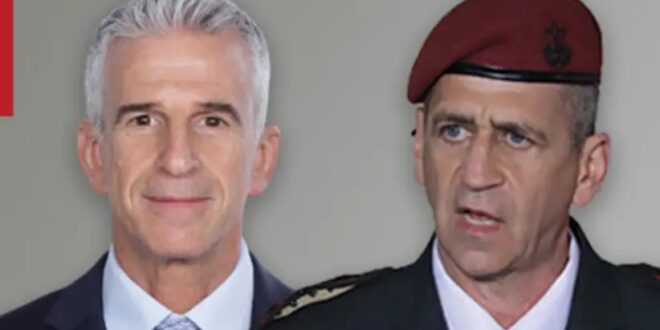 Israel’s defense chiefs are working to keep the country safe

No. 14 on The Jerusalem Post’s Top 50 Most Influential Jews of 2021: IDF Chief of Staff Lt.-Gen. Aviv Kohavi and Mossad chief David Barnea.

It’s been a busy two years for Israel’s top security officials, Lt.-Gen. Aviv Kohavi and new Mossad chief David Barnea, fighting a war they never imagined they’d fight – the coronavirus and overseeing the battle against threats through a time of political and economic uncertainty.

Kohavi began his term in 2019 when Israel’s usual foes – Iran, Hezbollah and Hamas – were top priorities. And throughout his tenure, no matter the surrounding difficulties, Israel’s war-between-wars campaign against Iran and its Lebanese proxy Hezbollah has seen action on a weekly basis.

Over the past year under his command, the IDF has acted aggressively against Israel’s enemies, from north to south. It’s also played a key role in the fight against the coronavirus that has raged across the entire world.

He believes it is of utmost importance to build the military for threats it will face some 30 years in the future and constructed the IDF’s multi-year plan accordingly, with new concepts and methods of warfare that have been adapted to the challenges of the urban battlefield saturated with enemy fire.

But it’s the North that has seen almost daily operational activity against both Iran and its proxies in Syria and Lebanon where Hezbollah reigns.

The past year has seen an increase in the pace and quality of Israeli strikes against Iranian assets in Syria, including kinetic operations as well as an expansion of both covert and clandestine operations.

“Our message is clear,” Kohavi has warned. “We will continue to act as vigorously as necessary against Iranian entrenchment in Syria, and we are fully prepared for any sort of aggression against us.”

Barnea stepped into his role with a bang.

On June 23, only three weeks after he had taken office, a facility for assembling advanced centrifuges at Karaj was attacked and seriously damaged by a drone.

The Post has learned that during the Barnea and Burns meeting, the clandestine chiefs engaged discussed the deep and daring ties between the two organizations and the joint challenges confronting the two countries and their intelligence bodies.

While serving as Mossad director, Barnea has continued with developing and strengthening strategic cooperation with countries and organizations – intelligence and other – across the globe.

Many substantial challenges face the Mossad director, with the primary mission continuing to be to thwart Iran’s nuclear weapons program.

Just as crucially, Barnea has been tasked with working to prevent the establishment of an arsenal of advanced precision surface-to-surface rockets on Israel’s borders.

In his opening speech in June, Barnea alluded to potential assassinations of Iran’s nuclear scientists and attacks on its facilities.

Based on the past, the coming year will be no less exciting, not for Israel or Kohavi and Barnea.

Post Views: 47
Previous The Taliban’s Comeback Is a Conundrum for Iran
Next Mossad may have destroyed some IAEA equipment at Iran nuclear site