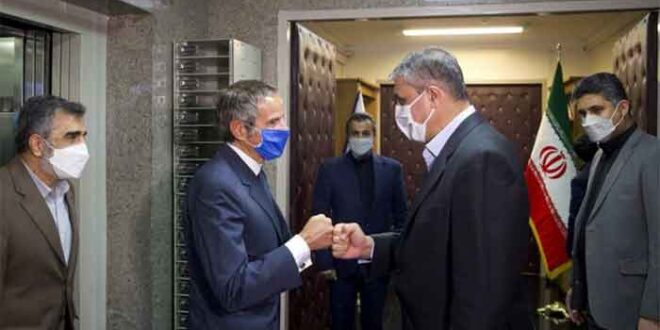 The incipient signs of a US retrenchment from Saudi Arabia have appeared in a series of moves in the past 2-3 weeks. On a parallel track, the Biden Administration is factoring in that new Iranian government is returning to the negotiating table at Vienna on nuclear issues.

The interconnected maneuverings are predicated, indirectly at least at this point, on an expected easing of the US-Iran tensions in a conceivable future.

Without doubt, the Biden Administration has just made a big statement in its regional strategies in West Asia by the removal of the most advanced US missile defence system and Patriot batteries deployed to Saudi Arabia to counter Iran and face down air attacks from Yemen’s Houthi rebels.

Riyadh showed its displeasure already by abruptly cancelling a scheduled visit to the kingdom by US Secretary of Defence Lloyd Austin.

The Pentagon cited “scheduling issues” as the reason but the postponement came when Austin was already in the region en route to Saudi Arabia after visiting Qatar, Bahrain and Kuwait.

Iran’s official news agency IRNA has been quick to zero in on further US moves in Saudi Arabia. An IRNA commentary on Sunday is titled Does US intend to withdraw 20k troops from Saudi Arabia? read more

Meanwhile, in an intriguing coincidence on Friday, the Biden Administration declassified a 16-page FBI report tying the 9/11 hijackers to Saudi nationals living in the US. The NPR has commented:

“The partially redacted report shows a closer relationship than had been previously known between two Saudis in particular — including one with diplomatic status — and some of the hijackers… While the Commission was largely unable to tie the Saudi men to the hijackers, the FBI document describes multiple connections and phone calls.”

Although the FBI document does not draw any direct links between 9/11 hijackers and the Saudi Arabian government as a whole, it validates the arguments in that direction and, together with the public evidence gathered to date, provides a blueprint for how al-Qaida operated inside the US with the active, knowing support of the Saudi government.

Interestingly, highly influential sections of the Iranian media have also reported that the US has evacuated three out of the total 13 US military bases in Syria in the most recent weeks.

Of course, these are early days, but if the troop withdrawal continues, the main losers will be the Syrian Kurds, but the regional states too will be called upon to adjust to new realities in Syria.

Tehran will be watching the downstream developments closely. Simply put, against this complex regional backdrop, the new government of President Ebrahim Raisi has shown remarkable flexibility in resolving the discord over the overdue servicing of monitoring equipment at the nuclear site at Natanz by the International Atomic Energy Agency [IAEA].

The joint statement issued in Tehran on Sunday following a visit by the IAEA’s Director General Rafael Grossi says: “IAEA’s inspectors are permitted to service the identified equipment and replace their storage media which will be kept under the joint IAEA and AEOI seals in the Islamic Republic of Iran. The way and the timing are agreed by the two sides.”

This may seem an inchoate baby step, but the discord threatened to snowball into a showdown at the IAEA’s 35-nation Board of Governors this week at which Western powers were threatening to seek a resolution criticising Iran for stonewalling the UN watchdog. (The upbeat tone of Grossi’s public remarks in Tehran was self-evident.)

Indeed, it also has a deeper meaning, not only being the first major nuclear policy decision taken by Raisi but conveying a constructive attitude. Tehran is indeed preparing for the delayed 7th round of the nuclear negotiations in Vienna.

What makes this even more significant is that Russia is coordinating with the US in urging Iran to move in this direction. Deputy Foreign Minister Sergey Ryabkov said in Moscow on Thursday that ways to resume the negotiations in Vienna were discussed during talks with the visiting US Special Envoy for Iran Robert Malley on September 8-9. He said,

“Importantly, we share with the Americans an understanding on the need to make further progress at the negotiations, which need to resume from the point where the sides stopped in June, when the negotiations were interrupted.”

Russia is of course going the extra league to navigate the nuclear talks. In a significant gesture toward the Raisi government, Russia has allocated a $5 billion loan to Iran for the development of Bushehr nuclear power plant and certain other projects.

Interestingly, these projects include the implementation of the Incheboron-Zahedan railway, which is expected to connect the Russian railway grid with the Iranian ports of Bandar Abbas and Chabahar.

No doubt, Russia is helping Iran’s plans to emerge as a hub in regional connectivity between the Persian Gulf, Africa and South Asia with Afghanistan and Central Asia and Eurasia in general.

It is a realistic estimation that Moscow is in the process of upgrading the trajectory of the Russian-Iranian economic cooperation in expectation of the lifting of sanctions against Iran. President Putin will neither aspire to be the new sherif in West Asia nor indulge in grandstanding, but Moscow will also not fail to notice that the US retrenchment from Saudi Arabia and a US-Iran nuclear deal may potentially open up new avenues to advance Russian interests.

Thus, while one way of looking at the new Russian-Saudi military cooperation agreement signed in Moscow on August 24 could be that Riyadh is signalling willingness to diversify its defence relationships beyond its longtime focus on the US, without question, it also serves as a sign of growth between the Kremlin and the kingdom.

The agreement was signed by Saudi Deputy Defense Minister Prince Khalid Bin Salman, who also happens to be the younger brother of the powerful Crown Prince Mohammed bin Salman.

All these successive events through the past couple of weeks ‘post-Afghanistan’, taken together, presage winds of change blowing through the Gulf region.

It seems the Biden Doctrine is off the drawing board, a key characteristic being the focus on vital US national interests.

Fundamentally, the pattern that is emerging in the so-called Greater Middle East is that the US is hunting for a new place in the world and will not be bogged down in open-ended conflicts in any region.

Put differently, apart from the prospects for the conclusion of a US-Iranian agreement on the nuclear issue distinctly looking up, a whole spectrum of strategic choices is appearing on the horizon.

Reports from Tehran suggest that the new Foreign Minister Hossein Amir-Abdollahian plans to visit New York later this month to attend the annual UN GA. Traditionally, it is an occasion when Iran’s diplomacy fires all cylinders.

Amir-Abdollahian is no stranger to American officials. He is an experienced diplomat who worked for the Foreign Ministry from 2005-2016. He had participated in the talks with the US in 2007 in Baghdad, which led to one of those rare moments when the two sides could develop common ground and a pragmatic working relationship in Iraq based on convergence of interests.