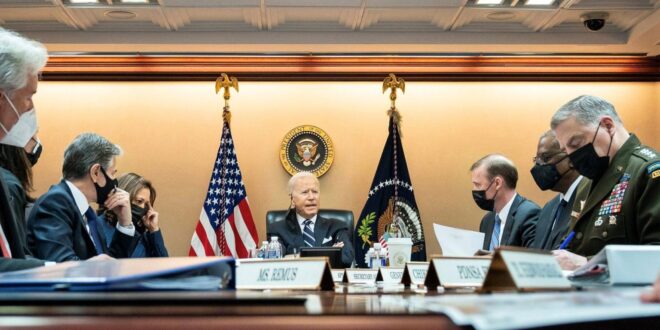 On August 31, Joe Biden accepted the inevitable and announced the final departure of all open military personnel from Afghanistan.

Perhaps, the most important part of the speech had to do with the future, and here Biden was unequivocal:

A major motivation for getting out of Afghanistan is to give the US a freer hand to bring down China and Russia. And this is not to be a peaceful “Pivot.” The US has surrounded both countries with military bases, and the Pivot to Asia pioneered by Obama/Hillary/Biden sees 60% of America’s naval forces ending up in China’s neighborhood.

The Final Quagmire. In the aftermath of the Afghan retreat the resolutely clueless mainstream punditocracy is asking: Has the US learned from this latest fiasco about the limits of its power? Did they not read Biden’s speech? Clearly, they have not.

If the US has not been able to defeat a minor power like Afghanistan (or Vietnam), what are the odds of doing so with powers like Russia and China? And given the nuclear weapons capacity of these powers, where might that lead? How many Cuban Missile Crises, or worse, shall we have to go through in this New Cold War before one incident leads not simply to endless war but to a world ending war?

Let us be clear. Biden did the right thing in terminating the war and he should do the same in Syria, Iraq and elsewhere. He has, however, not only done the right thing for the wrong reason, but for a very malign reason which will lead to greater problems and graver dangers.

Unfortunately, the pols, the pundits and think tankers pay no heed to the danger here. Equally sad, too many liberals are silent about this New Cold War or cheer it as a new crusade for “democracy and human rights.” But some opposition is coming from a quarter that must deal with reality, not ideology or electioneering demagoguery.

The Business Realists Push Back. On the day after Biden’s speech, the New York Times ran a story on the front page of the business section entitled, “Businesses Push Biden to Develop China Trade Policy: … companies want the White House to drop tariffs on Chinese goods and provide clarity about a critical trade relationship.” Said the article:

“Business impatience with the administration’s approach is mounting. Corporate leaders say they need clarity about whether American companies will be able to do business with China, which is one of the biggest and fastest-growing markets. Business groups say their members are being put at a competitive disadvantage by the tariffs, which have raised costs for American importers.

“Patrick Gelsinger, the chief executive of Intel, said in an interview last week…’To me, just saying, ‘Let’s be tough on China,’ that’s not a policy, that’s a campaign slogan. It’s time to get to the real work of having a real policy of trade relationships and engagement around business exports and technology with China.’

The silent cruelty of Biden’s speech. Biden was right to grieve for the 2,461 Americans killed in Afghanistan. But he failed to mention the hundreds of thousands of Afghans killed as a direct result of the war, hundreds of thousands more as a result of disease and malnutrition and the millions displaced internally and millions more as external refugees. Instead of apologies from Biden and an offer of reparations, there came news that the US was freezing over $9 billion dollars in Afghan foreign assets needed by this starving nation lying in ruins.

The United States has apparently learned nothing either in terms of the limits of its power or the morality of its foreign policy if we are to take Biden’s speech and actions as any indication. To say the least, it will not be easy to change this, but we have no choice. A calamity beyond imagination awaits us if we fail.