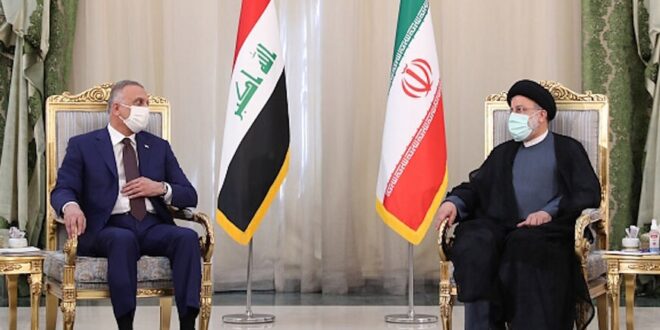 After their meeting, Raisi said that Iran and Iraq’s relations go beyond issues of a shared border, and that they are “deep relations” of people-to-people and government-to-government on a number of issues, including faith. “Despite the wishes of the enemy, there is room for relations to grow,” he added.

Iraq is stuck in a delicate balancing act between its relations with Iran, which it shares a border with, and the Arab countries in the Persian Gulf and the United States. Iraq needs the support of all these countries if it wants to have domestic stability, though many of them are seeking to reduce the others’ influence in Iraq.

Khadimi also met with Ali Shamkhani, the secretary of the Supreme National Security Council. Shamkhani said that the two countries must cooperate in the complaints against the United States about the assassination of former Quds Force commander Qasem Soleimani and former Popular Mobilization Units commander Abu Mehdi Mohandes. Former US President Donald Trump ordered an airstrike that killed them just outside the Baghdad airport.

There are also important economic ties between the two countries. According to a post by Iranian analyst Mohsen Maghsoudi on Telegram, one of Iran’s requests is that Iraq open up the route for Tehran to ship to Syria by land through the city of Al Bukamal. Maghsoudi said that this route could cut costs by one third for Tehran and financially benefit all parties as well as open Iran up to the Mediterranean Sea.

Another issue to be discussed is Iran’s gas imports to Iraq. While Iran has recently reduced gas imports, Iraq has struggled to pay Iran in the past. Some Iraqi officials have said that the the lapses in payment was due to US sanctions and blocked money.