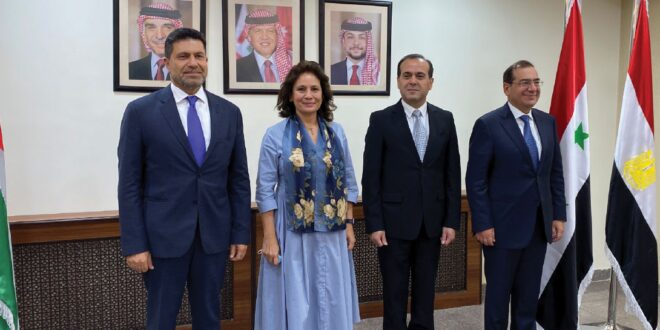 Last week, the Energy ministers of Egypt, Jordan, Syria, and Lebanon met in Amman, to discuss a plan to transmit Egyptian gas and Jordanian electricity to Lebanon, which is suffering from a severe shortage in electricity and fuel. This comes after the first official Lebanese visit to Syria since the beginning of the Syrian civil war. In fact, Lebanon had sent a high-ranking delegation, comprised of high-ranking ministers, including Zeina Akar, who held the positions of Deputy Prime Minister, Minister of Defense, and Minister of Foreign Affairs in Lebanon’s caretaker cabinet, and the country’s very influential security chief, Abbas Ibrahim.

This visit occurred after the U.S. ambassador in Beirut, Dorothea Shea, gave a very rare green light that allowed Lebanese authorities to transmit gas and electricity through Syria, despite Washington’s sanctions on the Damascus regime. Ironically, the announcement came only hours after Hassan Nasrallah, the secretary-general of the Iran-aligned Hezbollah, announced that an Iranian ship loaded with oil is headed towards Lebanon to help ease the crisis there.

“For the Americans, and their Arab allies, it is better to let Syria exert some kind of influence over Lebanon than to allow Iran to strengthen its position there”, claims Joseph Bahout, the Director of the Issam Fares Institute for Public Affairs and International Studies at the American University of Beirut.

But can Syria, which is an ally of Iran and part of what is often referred to as the ‘axis of resistance’ be an effective counterweight to Iran in Lebanon? Karim Bitar, who heads of the Institute of Political Studies at the Saint-Joseph University in Beirut, seems to believe so.

“Indeed, Iran and Syria are allies, but it is important to know that there exist many nuances in the way they operate. Take for example what is happening in Southern Syria”, he says.

In Lebanon, the differences between Iran and Syria also exist. “One can look for example at the questions of the de facto veto power that Hezbollah has acquired over Lebanese politics or even the question of the group’s weapons. Syria might have a much more nuanced position on these subjects compared to Iran”, he says.

“Nevertheless, it is uncertain if the Syrian State has the capabilities to project influence”, Bahout claims. For him, Lebanon is not falling back into Syrian hegemony like in the years before 2005. “Likely, we are moving towards the normalization of relations and the establishment of dialogue channels with the regime on issues such as trade and refugees”, he says.

Bitar seems to share Bahout’s perspective. “Syria no longer has the same unconditional allies in Lebanon it had previously. Take for example the speaker of Parliament Nabih Berry, who was a close ally of Damascus during the occupation period. He did not visit Syria once since the beginning of the war there. Assad can just count on smaller movements like the Syrian Social-National Party or even on some local figures like Weam Wahhab,” he explained.

But what is sure, is that Syria has a lot to gain from this bargain, both politically and economically. In fact, the Syrian minister of Oil and Mineral Resources has announced that Syria will be getting a share of the gas transmitted to Lebanon through the Arab pipeline. Furthermore, reconnecting with the Arab world would allow Syria to obtain financing for its reconstruction and free itself partially from its dependency on Russia and Iran.

In fact, Damascus can use Lebanon to retrieve at least part of its historical role in the region. “Lebanon can be used as a gateway by Syria for normalization with Arab countries, and the Amman meeting is the perfect example of that”, Bahout clarifies. “It is also important to remember that Lebanon is the economic lung of Syria, especially in light of the very bad relationship that has developed between Damascus and Ankara since the beginning of the war,” Karim Bitar explains.

“Syria also perceives this as an opportunity for revenge over the Lebanese, as the regime still did not swallow the humiliating way it was kicked out of Lebanon in 2005”, Bitar adds.

Post Views: 149
Previous Taking Stock of the Terrorism Landscape in the United Kingdom
Next Jordan’s Normalization with Syria Prevailing After U.S. Green Light