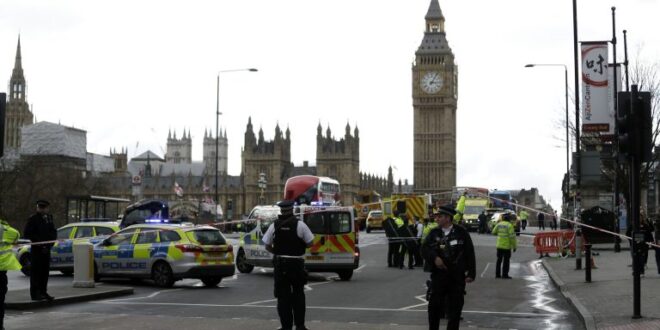 The Taliban victory in Afghanistan is likely to embolden UK-based Islamic extremists and McCallum warned that recent events have provided a morale boost to jihadists and their supporters.

In addition to jihadist plots, McCallum also noted that there is a “growing number” of plots by far-right extremists in the United Kingdom.

The UK has been proactive in proscribing far-right extremist groups and designating them as terrorists, attempting to blunt their momentum, setting an important normative standard.

Last week, MI5 Director General Ken McCallum revealed that over the past four years, thirty-one “late-stage” terror plots were thwarted by British authorities. The majority of these were linked to Islamic extremists, indicating that Salafi-jihadists still pose the most significant extremist threat to the United Kingdom. With a number of terrorist detainees due to be released from prison, and widespread concerns about recidivism, there is lingering fear over prison radicalization and the viability of rehabilitation. Several instances of recidivism rocked the UK in recent years, including a November 2019 attack on London Bridge, an attack at a maximum security prison in January 2020, and a February 2020 attack in the Streatham suburb. Despite these challenges, the UK’s domestic counterterrorism strategy, known as CONTEST, is largely viewed as a success and its PREVENT program has undergone several reviews and iterations to respond to critiques, lessons learned, and the evolving terrorist threat.

The recent Taliban victory in Afghanistan is likely to embolden Islamic extremists around the world, including in the UK, and McCallum warned that recent events have likely provided a morale boost to lone actors and other jihadist supporters. Speaking on the eve of last week’s twenty-year anniversary of the September 11 attacks, McCallum said, “There is no doubt that events in Afghanistan will have heartened and emboldened some of those extremists and so being vigilant to precisely those kinds of risks is what my organization is focused on along with a range of other threats.” Congressional testimony by intelligence chiefs in the United States revealed that estimates suggest al-Qaeda could rebuild its networks in one or two years. Having suffered numerous high-profile attacks on British soil, including the 2005 London attacks as well as the 2017 Manchester Arena bombings, the UK remains on high alert from jihadist-inspired or directed terrorism, although it is far from the only threat facing the country.

McCallum also noted that there is a “growing number” of plots by far-right extremists. Over the course of the past year, authorities in the UK have conducted a series of arrests of individuals suspected of terrorism offenses motivated by far-right violent extremism. The arrests included a sixteen-year-old boy, highlighting the complexities of the evolving threat in the UK as extremist groups increasingly recruit younger members. There have been numerous teenagers involved in the far-right violent extremism milieu in the UK, and authorities have been confounded by the increasingly young ages of terrorism suspects. The British strategy has been a proactive one, especially when compared to other Western countries, though it has also raised some concerns about freedom of expression online and privacy safeguards. Between 2016 and 2020, the number of referrals to the UK’s counterextremism strategy PREVENT for far-right extremists in England and Wales doubled for individuals under twenty-years-old.

There is growing concern that far-right extremists will continue to benefit from pandemic-related restrictions, as movements challenging government authority continue to rise in the UK and throughout Europe. Narratives commonly found in U.S.-based far-right circles have also migrated to the UK, especially since the storming of the U.S. Capitol on January 6. A thirty-seven-year-old man from Leicestershire was recently charged with preparing acts of terrorism, accused of planning coordinated terrorist attacks on important infrastructure sites throughout the UK to prevent the “emergence of a Chinese communist system,” a common refrain among American far-right extremists and conspiracy theorists. The UK has been proactive in proscribing far-right extremist groups and designating incidents as terrorist attacks, countering them before they gain momentum. These efforts have set a normative standard reflected across several member states of the Five Eyes—an international intelligence alliance—such as Canada, which has already proscribed several right-wing terrorist groups. To date, the UK has proscribed The Base, National Action (NA), Sonnenkrieg Division (SKD), Feuerkrieg Division (FKD), and Atomwaffen Division (AWD). Several other groups are designated under a synonym or umbrella group or by affiliation, including Scottish Dawn, National Socialist Anti-Capitalist Action (NS131), System Resistance Network (SRN), and National Socialist Order (NSO). As more states highlight the threat posed by domestic far-right terrorism, there are also questions about if or how the United Nations can play a role in addressing the transnational dimensions of far-right terrorism, or apply existing counterterrorism frameworks and tools to support states in addressing this threat, particularly in areas where UN members have developed more detailed guidance, such as countering the financing of terrorism and terrorist narratives and outreach.

Post Views: 52
Previous What Should the United States Expect from a Taliban Government?
Next For the U.S., Better Syria than Iran in Lebanon