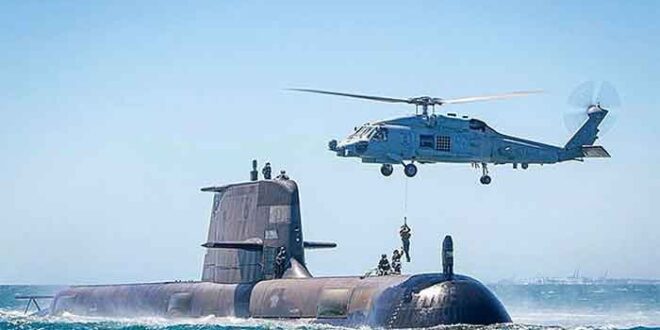 Beijing has condemned the announcement last Thursday of a new AUKUS military pact between the US, Britain and Australia, which is focused on the Indo-Pacific and aimed against China. The Chinese government has also taken aim at the associated decision to assist Australia in building nuclear-powered submarines.

Foreign Ministry spokesman Zhao Lijian criticised the three countries for being “extremely irresponsible.” The decision to supply Australia with nuclear submarines, he said, “seriously damages regional peace and stability, intensifies the arms race, and undermines the Treaty on the Non-Proliferation of Nuclear Weapons.”

Zhao declared any regional mechanism in Asia “should be conducive to mutual trust and co-operation” and “not target any third party or harm the party’s interests by forming an exclusive and closed small group.” He called on the US, UK and Australia to “abandon the outdated Cold War zero-sum mentality and narrow-minded geopolitical perception… Otherwise, they will only end up shooting themselves in the foot.”

Speaking via video-link to a summit of the Shanghai Cooperation Organisation (SCO), Chinese President Xi Jinping struck a similar note. He urged members of the grouping, which includes Russia and Central Asian Republics, to “absolutely resist external forces to interfere [in] countries in our region at any excuse.”

These statements have been followed by editorials and commentary in the major Chinese state-owned media that have been far more forthright in their condemnations.

The China Daily pointed out that US President Biden was behaving more aggressively toward China than Donald Trump had done. “The Biden administration, for all its claims to be different from its predecessor, seems to have copied one unpleasant mannerism at least and that is how to behave in the region like a street gang boss, amplifying differences and stoking confrontation in a bid to start turf wars,” it said.

The comments reflect real fears in Beijing that Biden is accelerating the confrontation with China and preparations for war that began with President Obama’s “pivot to Asia” and were expanded on all fronts under Trump. Biden has maintained all Trump’s hostile anti-China policies, including his punitive trade war measures and economic sanctions.

The AUKUS alliance is squarely aimed against Beijing, even though China was not specifically mentioned by Biden or the Australian and British prime ministers. The following day the annual AUSMIN talks between the top US and Australian officials for defence and foreign affairs did explicitly criticise China, while agreeing to a further expansion of US access to Australian military bases.

China’s state-owned Global Times warned that by building nuclear-powered submarines Australia could become a target in any war. A “senior Chinese military expert” cited by the newspaper dismissed promises by the Australian prime minister not to build nuclear weapons, pointing out that Britain or the US could easily place nuclear arms on the submarines.

Beijing and Moscow would not treat Canberra as “an innocent non-nuclear power,” but “a US ally which could be armed with nuclear weapons anytime,” the expert explained, stressing that AUKUS was putting Australia in danger, and could bring destructive consequences to the country if a nuclear war broke out.

A particularly incendiary element of Biden’s anti-China policies is his administration’s focus on boosting ties with Taiwan—moves that undermine diplomatic relations between the US and China. The basis of formal diplomatic ties between the two countries established in 1979 was the “One China” policy that de facto recognises Beijing as the legitimate government of all China including Taiwan.

The statement released from the AUSMIN talks declared that Australia and the US intended to “strengthen ties with Taiwan,” describing it as a “leading democracy and a critical partner for both countries”. Taiwan’s ministry for foreign affairs “sincerely thanked” the US and Australia for their “firm and open” support.

In Britain, Prime Minister Boris Johnson was evasive when former Prime Minister Theresa May asked about the implications of the AUKUS pact for Britain if China attempted to invade Taiwan. He did not rule out joining US military action against China.

Taiwan’s foreign ministry spokesperson Joanne Ou welcomed the formation of AUKUS, adding diplomatically “but it doesn’t imply that we are asking the UK to get involved in the conflict across the Taiwan Strait.”

The US, Britain and Australia, in forging diplomatic relations with China, ended all diplomatic ties with Taiwan in an acceptance, either explicit or implicit, of the “one China” policy. The strengthening of ties now taking place only encourages Taipei to take a more independent stance and fuels its tensions with Beijing.

China regards Taiwan as a renegade province and has repeatedly warned that it would respond, including with force, if Taipei ever formally declared independence.

While condemning the AUKUS announcement, the state-owned media in China has generally played down its significance, whilst warning of a return to the Cold War between the US and the former Soviet Union.

The analogy is not an accurate one, however. Despite the Cold War rivalry and at times dangerous tensions, the Soviet Union did not pose an economic challenge to US imperialism. Moreover, the Soviet Stalinist bureaucracy collaborated with Washington around the world to defuse dangerous flashpoints and derail revolutionary movements.

Three decades after the dissolution of the Soviet Union, China has grown to become the world’s second largest economy, aided by huge inflows of foreign capital and technology. Its needs for raw materials, energy, parts and technology inevitably bring it into conflict with the post-World War II imperialist global order dominated by the US.

In its historic decline, the US ruling class regards China as the main threat to its global hegemony and is determined to use all available means, including military if necessary, to subordinate China to its national interests. What is opening up is not decades of a Cold War standoff between nuclear armed powers, but a slide toward military conflict if the international working class does not intervene on the basis of a genuine socialist perspective.