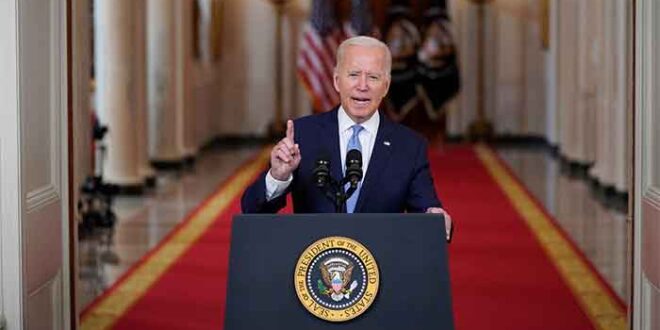 Indications are not lacking in American foreign policy (FP) that the man who took Oval Office in January on an anti-pandemic agenda is bereft of fresh innovative ideas to create world peace and regain American economic strength to lead the world. Where is Biden’s world leadership heading for, if it only withers in engendering wars, confronting Russia and China wherever possible, creating blocks of confrontation to legitimise and reinstate “a post WWII-primordial” U.S. hegemony, after a shameless walkout in Afghanistan, now losing even an important European ally France with the latest Aussie Nuc-Submarine deal?

If one were to answer not in the affirmative, i.e. the U.S. is out to lose its remaining whatever power clout is left, then one has to remind oneself that Biden had a successful mature meeting with Putin this year, only to contradict himself with a rhetoric follow-up weeks later. Again, he had sent signals to China to patch up with Xi on the trade front, but again accompanied by a follow-up barrage of bellicose warnings to China, especially when the U.S. is still “deficited ”vulnerably in trade with China in over $308.8 B (Exports $163B – Imports $471.8B in 2019). Both U.S. and China need each other and cooperation and dialogue is the only effective pragmatic way, helping also slash military spending to benefit U.S. citizens at home. But the actual U.S. signals and signs set in action and sent out periodically, including those by adjutant Secretary of State Blinken of late, have not enlightened most world politicians.

Given all the cold figures of Afghan war in toto, even harsh critics of Biden would now want to concede, ending the Afghan war was well within America’s long-term mental sanity and health. Say, Cheers to Biden!!! Voices are only raised as to how he sealed it. Here, Biden rightfully points at the U.S. Intel for misleading him. Biden nevertheless knew well the kernel truth, namely, the very history of U.S. Afghan engagement beginning with the last days of Jimmy Carter, is replete with incongruities. Architected by Pakistani ISI (Inter-Services Intelligence) under Pak General Zia with heavy U.S. backing via CIA with even Osama bin Laden on CIA payroll, the Taleban that was created primarily to fight the Soviets backfired when these turned anti-capitalist, anti-corporate and anti-Islamic socialist, esp. as they opposed a U.S. oil company to build a pipeline across Afghanistan. But the U.S. investment was by then heavy. It is not the material-financial costs of over a Trillion dollars alone this 20 yr. war cost, but more the mental-psychological damages on the American psyche, now exacerbated by Covid-19 continuing to eliminate over 600 k American lives inside the U.S. borders, ravaging also precious American freedom. America cannot take anymore. No more lone imperial war walks across the Globe. So his asking “Allies” to join him to take on his perceived enemy No. 1 China. Excepting for U.K. most European Allies are at heart disillusioned by Biden’s FP priorities

A natural question that surges is -. What does Biden really want? To get clear we face further sub-questions. Is he a confused man? Are his supportive systems like U.S. Intel agencies to blame for this and hence principally defect? Is the overriding power of U.S. Military-Industrial Complex (USMIC) too strong on him binding his hands (as in the recent Aussie Nuc-Sub deal)? One should not forget that no American president ever succeeded in not succumbing to the pressure of USMIC which necessarily needs world tension and conflicts to sell its products. What these mean arms profiteers do not want to understand, like that Israeli company that sold a dangerous spyware indiscriminately all over Globe, is that a world full of ammunitions, guns, warships, lethal nukes etc. can more easily spark by accident somewhere and everything can blow up. War history should teach human beings, the losses through war are heavy, tragic, anti-economic and socio-psychologically destabilising. The more arms are sold, as at present, the more the probability of deaths rising worldwide.

Let’s face it. Mighty America could not stop a primitive mountain rag-tag force of Talebans after 20 long years of pounding with the heaviest conventional ammunition and sophisticated arms it tooled, including the use of best high-tech drones. How less will it win against more complex forces and strategic set-ups comprised of Chinese and Russian forces? Should more Americans die for Biden to make him realise that? If the American people are fed up of these foreign wars, and if correspondingly Biden cannot sing along with their hearts’ melody, his time in office may well get severely limited with Democrats’ leadership credibility lost, no matter how much the dominant mega media could twist things in their favour. Have we not heard distant drums sounding ‘impeachment’ chord? Hopefully, an experienced Pres. Biden is definitely not that untalented to discern the subtle dangers (to his presidency), or is he misreading the signs on the wall already?

Right now, excepting for the Afghan exit misery, Biden is well-mandated to chart his clear course for a peaceful prosperous world, both for America and the world. Instead of cashing on that trust given by the American voters after his victory he seems now limping in insecurity not knowing his way, clutching along with outworn Cold War strategies in his sub-conscious, half this way, half that way, gaiting in total confusion, an unpredictable state of affairs. Apparently the hangover left by Trump in the Washington milieu is till affecting him. Biden would relieve himself if he would wisely drop this anti-Russia, anti-China syndrome concocted in U.S. Intel labs or by Deep State and opt for a cooperative style worldwide. Where China needs to be fought is on the trade front and not on military field. The U.S. needs not only a new economic strategy, but more a holistic global harmoniser as its captain to bat for its genuine long-shot interests, and not a confrontationist-antagonist-militarist playing second fiddle to arms fabricants, however strong the arm-twisting of such lobbies be. Joe, it’s time to take a cool second look on everything.