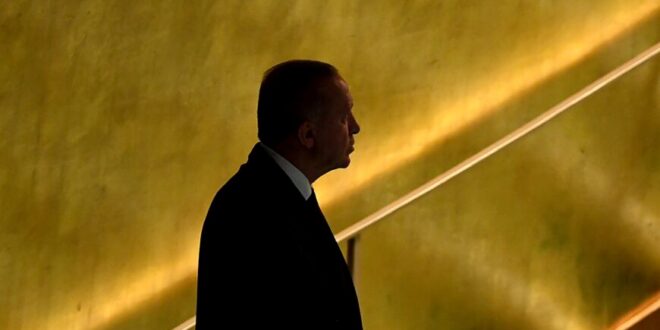 Erdogan says Turkish relations with US not ‘healthy’

Turkish President Recep Tayyip Erdogan added that the trajectory of US-Turkey ties “does not bode well.”

Turkish President Recep Tayyip Erdogan said Thursday that his country’s relationship with the United States was not “healthy.”

“I cannot say that a healthy process is running in Turkish-American ties,” Turkish broadcaster Haberturk quoted him as telling Turkish journalists on the margins of the UN General Assembly.

“It is my hope that, as two NATO countries, we should treat each other with friendship, not hostility,” Erdogan said. “But the current trajectory does not bode well.”

Ankara’s standing in Washington has soured over Turkey’s military campaign against Kurdish forces in northeastern Syria, its deteriorating human rights record, Ankara’s gas exploration in the eastern Mediterranean Sea and an ongoing US court case against a Turkish state-owned bank.

But the greatest source of strain has been Turkey’s acquisition of the Russian-made S-400 surface-to-air missile defense system, which the United States says poses a threat to NATO’s air defense capabilities and could compromise the security of its own F-35 stealth fighter jets.

In response to the multibillion-dollar purchase, the Trump administration removed Turkey from the F-35 program and slapped limited sanctions on Ankara under the Countering America’s Adversaries Through Sanctions Act (CAATSA).

Biden and Erdogan discussed the S-400 issue but did not reach a resolution during their meeting at the NATO summit in June. US officials say they will maintain the CAATSA sanctions and have threatened additional sanctions if Turkey makes another major arms purchase from Russia.

Erdogan’s comments follow a meeting between White House national security adviser Jake Sullivan and his Turkish counterpart, Ibrahim Kalin, on Wednesday. According to a US readout of the meeting, the pair “agreed on the importance of continued dialogue to enhance the US-Turkey bilateral relationship.”

Post Views: 76
Previous The Wagner Group Is the Last Thing Mali Needs
Next Bloody week in Yemen on border of government and Houthi territory