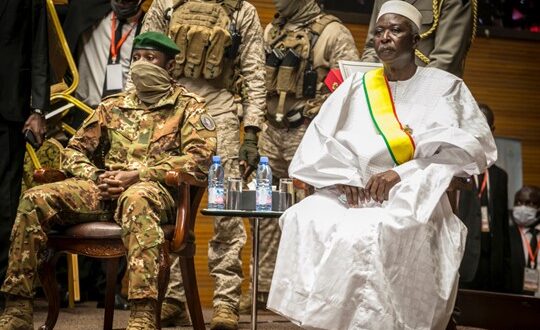 The Wagner Group Is the Last Thing Mali Needs

With rising communal and interethnic violence gripping swaths of the country, two coups in less than a year and a deadlocked transition to civilian rule, Mali is arguably facing its most uncertain moment since the 1991 March Revolution, which paved the way for the country’s return to civilian government nearly 30 years ago. Throw in a peace accord with northern insurgent groups on life support, a drawdown of Operation Barkhane—France’s massive counterinsurgency mission across the Sahel—and a rumored deal to deploy Russian private military contractors from the Wagner Group to the country, and it’s fair to say Mali’s immediate and long-term future are at stake.

The ramifications of instability in Mali do not stop at the country’s borders, not least because of its size and strategic positioning. The violence in Mali, which broke out nine years ago in the country’s north and has continued for nearly a decade, has since spread to central Mali as well as into Niger and Burkina Faso, costing thousands of civilian lives every year. Terrorist attacks are occurring closer to Bamako, Mali’s capital, with increasing frequency. And across the region, the Sahel is experiencing its worst spate of violence since the fighting began, with more than 6,500 people killed in Mali, Niger and Burkina Faso in 2020 alone, as well as a worsening humanitarian crisis driven in large part by the conflict. Clearly, the two coups staged in Bamako since August 2020 have done little to stem the tide of violence and instability, and arguably have worsened the Malian state’s ability to grapple with its myriad challenges.

“There is no improvement in terms of security, quite the contrary,” Boubacar Haidara, a lecturer at the University of Segou in Mali and an associate researcher at Sciences Po Bordeaux, told me. To underscore his point, Haidara pointed to a phenomenon occurring with increasing frequency since the two coups: the cordoning off of entire villages by jihadist groups. “These communities can remain blockaded for months without the security forces attempting to liberate them,” he added.

Undermining efforts to improve the security situation is the fact that the considerable diplomatic and defense coordination between Mali and a wide range of international actors—including France, the European Union, the United Nations and the United States—have not been sufficiently balanced with the political and development requirements necessary to build durable peace, prosperity and stability in Mali and across the broader Sahel. That speaks to a larger disconnect between the security priorities of these actors and the Malian state—to say nothing of the Malian population.

Since the August 2020 coup, the junta—led by Col. Assimi Goita—has seized total control of the political transition. “At this juncture, there is a lot of uncertainty about the transition to civilian rule in Mali,” Ousmane A. Diallo, a Francophone West Africa researcher at Amnesty International, told me. “The military officers have been the key player in control of the transition in Mali, with the political class, civil society and religious figures orbiting around their agenda.” Diallo noted that the junta has sidelined the M5-RFP coalition—a collection of civil society groups that mobilized last year’s protests against then-President Ibrahim Boubacar Keita in the months preceding his ouster by the military—in the composition of the transitional Cabinet, the nomination of the Transitional National Council (the interim legislative body), and the agenda-setting for political negotiations meant to usher in the return to elections and reform the constitution, if not draft a new one entirely. The junta ultimately circumvented the civilian guarantees demanded by the international community for the transitional period, removing the civilian president and prime minister, culminating in the second coup in May 2021.

Diallo also noted that the junta has played an effective game of cat-and-mouse with the public, responding to popular demands for accountability by decrying corruption and impunity as well as detaining former officeholders tainted by graft allegations. This has the effect of assuaging a restive population while clearing out undesirable potential candidates from the field for the planned presidential election in February 2022.

Against this backdrop, the current jostling between France and Russia for geopolitical influence in Mali is counterproductive to the long-term peace and stability Malians want and need. French Armed Forces Minister Florence Parly visited Bamako this week on the heels of a reported agreement between Mali’s transitional government and the Wagner Group, and amid deepening tensions between Bamako and Paris over counterterrorism strategy and the protracted political transition. The Wagner Group, seen as a plausibly deniable arm of the Russian state, has been accused of committing severe atrocities in the Central African Republic and other conflict theaters in Africa and the Middle East.

There is no question that Wagner’s presence in Mali would be disastrous for the local population, given the horrific abuses they have been accused of committing elsewhere. After nearly a decade of fighting, Mali seems as far away as ever from a peaceful resolution of its conflict. And there is no reason to believe Russian paramilitary forces will be part of any solution that works with Malians to stem the tide of extremist violence while building trustworthy institutions, inclusive politics and a robust economy. For its part, however, the military government led by Goita has demonstrated no desire to rebuild Malian society along those lines either. Its only visible interest is to retain power and sustain the military’s dominant role in Mali. The rumored agreement with Wagner is but a testament to this.

At the same time, it is impossible to separate the government’s overtures to Wagner—as well as Russia’s growing ambitions in Mali—from lingering, broadly shared resentment against the French colonial legacy, particularly among younger Malians. And it is counterproductive and even disingenuous of Paris and defenders of its Mali policy to ignore these concerns or dismiss them, as well as their implications, as merely the products of Russian disinformation campaigns. Malian government and security officials have long complained of the paternalistic attitude of their French counterparts, and Parly’s recent “warnings” against signing any deal with the Wagner Group only reinforce many of these grievances.

Successive governments in Mali have welcomed counterinsurgency assistance from France as well as from other international partners, in the process killing far more of their citizens than have died at the hands of the extremist groups they are ostensibly combatting. But the support Malians may have expressed for the French intervention in its earlier stages has largely dissipated, with many of them coming to view Operation Barkhane as a neocolonial project.

These concerns are understandable, not only for historical reasons but also contemporary ones, including a strategy that Paris insists is apolitical but which many Malians effectively see as taking sides in their domestic politics. And that is without mentioning the heavy toll on local civilians of French military operations, which Paris has often obfuscated and denied. An investigative report by the London-based international law firm Stoke White documented that French airstrikes in a central Malian village in January, ostensibly targeting insurgents, instead struck a wedding, killing 19 innocent civilians. The report contradicted French denials of civilian deaths in the attack and corroborates U.N. findings released in March. However bad Russia’s intentions are in Mali, they do not obviate the need for Paris to confront its own self-inflicted crisis of legitimacy there, which is the result of its own actions as well as those of its local partners.

France is now “Europeanizing” its presence in Mali via the EU’s Takuba Task Force, in which special operations forces from EU member states advise, assist and accompany Malian security forces in counterinsurgent operations. But Diallo pointed out that France is by no means “leaving” Mali, given its fears of reduced influence in the country and region. Haidara agreed, referring to a recent article he co-authored explaining why the end of Operation Barkhane does not mean the end of the French military presence in the Sahel.

Other international stakeholders in Mali are unlikely to effectively influence domestic events and actors, not least the Economic Community of West African States, or ECOWAS, whose months of mediation between the transitional government and Malian civil society have scarcely yielded concrete results. Diallo thinks the transition is unlikely to end in February 2022 as planned, given that the transitional government is behind schedule on several reforms that need to be implemented prior to the holding of parliamentary and presidential elections.

It is not too late for regional and international players to work in unison with local actors to avert disaster in Mali. And they should, as the current trajectory is effectively leading to a return to and entrenchment of military rule in Mali, nearly 30 years after the country’s return to civilian government. To say this will be a disaster for the people of Mali and their democracy would be an understatement.

Post Views: 102
Previous Australia Can’t Get By on Nuclear Subs Alone
Next Erdogan says Turkish relations with US not ‘healthy’