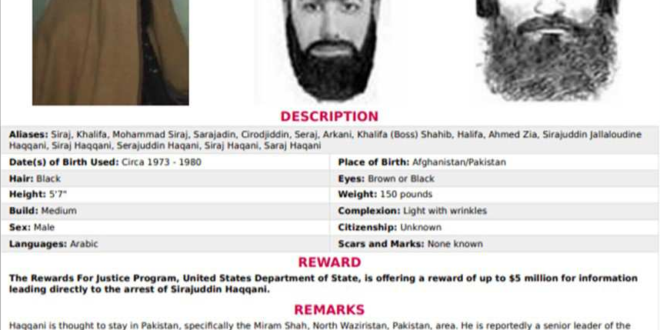 In a statement, the Islamic Emirate of Afghanistan (the Afghan Taliban jihadi organization which seized power on August 15, 2021) has condemned remarks by American officials that some ministers appointed by the Taliban are on the U.S. blacklist of terrorists and still targets for United States counterterrorism forces.

The so called Haqqani Network refers to a group of terrorists led by Jalaluddin Haqqani, a mujahideen leader of the anti-Soviet jihad in the 1980s. His son Sirajuddin Haqqani is now part of the Taliban cabinet as the interior minister and so-called chief of Haqqani Network. He is also among the FBI’s Most Wanted Terrorists.

Following is the Taliban statement:

“Pentagon officials have remarked that some cabinet members of the Islamic Emirate or family members of late Haqqani Sahib [i.e., Jalaluddin Haqqani] – may Allah be pleased with him – are on the U.S. blacklists and still targets. The Islamic Emirate considers this position a clear violation of the Doha Agreement which is neither in the interest of the United States nor Afghanistan.

“The family of honorable Haqqani Sahib is part of the Islamic Emirate and does not have a separate name or organizational setup [such as Haqqani Network]. Similarly, in Doha Agreement all officials of the Islamic Emirate without any exception were part of interaction with the U.S. and should have been removed from the U.N. and U.S. blacklists [of global terrorists], a demand which still remains valid.

“That America and other countries are making such provocative statements and trying to meddle [in] the internal affairs of Afghanistan, the Islamic Emirate condemns it in the strongest terms. Such remarks by U.S. officials are a repetition of past failed experiments and such positions [are] detrimental for America.

“We urge that these incorrect policies be immediately reversed through diplomatic interactions.