The Chinese authorities said on Friday that all cryptocurrency-related businesses are illegal and they urge the exit of cryptocurrency mining projects, as the country doubles down efforts on virtual currency regulation to fend off financial risks and facilitate improvement of the industrial structure for reaching carbon peak and neutrality goals.

Virtual currencies have no legal tender status, the People’s Bank of China (PBC), the country’s central bank, said in a notice on Friday. Bitcoin and other cryptocurrencies like Ethereum and Tether are not issued by the monetary authorities and have no legal tender power, and therefore should not and cannot circulate as a legitimate currency, it said.

The statement is an extension of the country’s intensifying regulation on cryptocurrencies beginning from a meeting of the State Council’s Financial Stability and Development Committee in May. The meeting signaled that a further crackdown on virtual currency trading and mining activities is part of efforts to fend off financial risks from the root.

On Friday, ten other government agencies, including the National Development and Reform Commission (NDRC), the Ministry of Industry and Information Technology and the Ministry of Public Security listed cryptocurrency mining as a sector to be eliminated.

The authorities ban the addition of new virtual currency mining projects, and require local governments to adopt a scientific timetable and approach to accelerate the exit of current projects on the basis of a stable transition, according to a statement on the website of the NDRC.

While strengthening supervision on cryptocurrency mining, the government agencies state to clarify the boundary between mining and high-tech industries like blockchain and cloud computing, prohibit to carry out mining activities in the name of data center, developing the digital economy or strategic emerging industries.

In addition, the statement said that government agencies will step up enforcement and firmly stop electricity generation firms, especially smaller ones, to provide electricity for cryptocurrency mining activities, while it’s strictly banned for mining firms to self-supply electricity.

Up to three-quarters of the world’s supply of bitcoin has reportedly been produced in China, but the process consumes vast amounts of electricity, and energy produced by coal-burning plants is a massive contributor to air pollution.

Over the past several months, several large virtual currency mining centers in China, including in Southwest China’s Sichuan Province and North China’s Inner Mongolia Autonomous Region have announced to shut down cryptocurrency mining projects partly out of consideration for energy consumption.

Li Yi, director of the green digital development research center of the Shanghai Academy of Social Sciences, told the Global Times that with intensifying regulations, financial risks will be efficiently forestalled and the capacity of the financial sector to serve the real economy will be further strengthened. 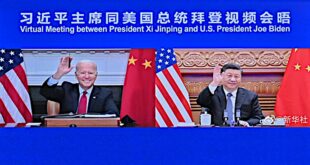