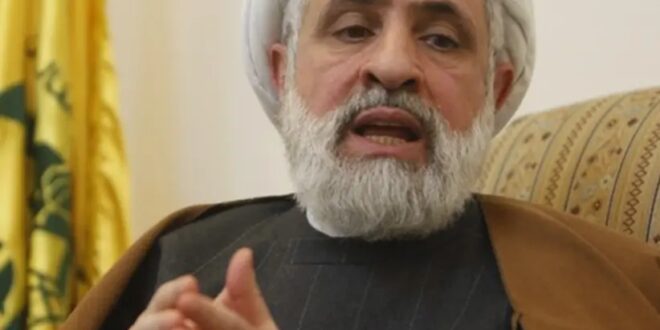 Hezbollah Deputy Secretary-General Naim Qassem warned on Friday evening that any attack by Israel on Lebanon will be met with a response, and that its weapons are ‘locked and loaded.’

Any attack by Israel on Lebanon will be met with a response from Hezbollah, Deputy Secretary-General Sheikh Naim Qassem said on Friday evening, according to Palestinian media.

“Any Israeli attack on Lebanon will be met with a response from Hezbollah. Even if [Lebanon] is dragged into a war, we will face the war. Our weapons are locked and loaded. If we need more, we have our ways to rearm ourselves,” he said, according to reports on Twitter.

“We are waiting for the Lebanese government’s position on the indirect negotiations with [the Israeli enemy] regarding the border issue, and when our turn arrives, we will do our duty,” he said.

“We will continue to bring oil as long as Lebanon’s central bank and Lebanese fuel companies do not supply Lebanon’s oil/fuel needs,” he added.

In his speech, Aoun called for a resumption of the indirect talks on Lebanon’s maritime dispute with Israel.

“We remain gravely concerned at Israel’s repeated threats against Lebanon and, more recently, Israel’s plans to carry out oil and gas exploration activities along the contested maritime border,” he said.

“We condemn any and all attempts to violate the limits of our exclusive economic zone and we maintain our right to the oil and gas found within that zone,” he said.

“Lebanon demands the resumption of indirect negotiations on the demarcation of the southern maritime borders in line with international law,” Aoun said. “We will not relinquish nor compromise on our border claims, and it is the role of the international community to stand with us.”

Israel and Lebanon began US-mediated negotiations regarding their maritime border in October 2020, which were the first talks between the countries in 30 years. The two Middle East neighbors hoped that settling the border dispute would encourage further gas exploration in the area.

Israel already pumps significant amounts of gas from the Mediterranean, but Lebanon has yet to do so.

The Lebanese delegation at the time faced significant pressure from Hezbollah to abandon the negotiations.

After four rounds of talks, negotiations stopped in November. Israeli Energy Minister Yuval Steinitz accused Lebanon of changing its position seven times, presenting “positions that add up to a provocation.”

Aoun’s remarks came two weeks after a new Lebanese government was sworn in ending a 13-month long political crisis that began after a devastating blast destroyed the Beirut port on August 4, 2020.

Kassem’s statement may be an attempt to signal to the Lebanese people that despite Aoun’s condemnation of Israel’s actions, Hezbollah still sees itself as the true defender of Lebanon.