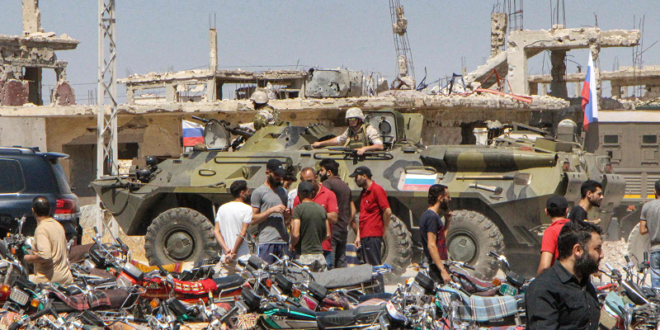 In the cradle of the Syrian revolution, renewed violence shows reconciliation is still elusive

The Syrian city of Daraa is frequently dubbed “the cradle of the revolution” because it witnessed the first protests against President Bashar al-Assad in 2011.

After the unrest turned to armed revolt and the rebels were later defeated there in 2018, they struck a deal unlike any other in Syria: In return for surrendering their heavy weapons, the rebels and their supporters were allowed to remain in Daraa under partial self-government.

But this approach, which was to serve as a model for other restive parts of the country, broke down over the summer amid fresh bloodletting as Syrian government forces besieged the town, pounding the old quarter of Daraa al-Balad and other neighborhoods with missiles, artillery and barrel bombs. Supplies of food and medicine were choked off and, the United Nations said, more than 38,000 civilians fled between late June and a tentative truce two weeks ago.

The outbreak of violence in Daraa, located in southern Syria close to the Jordanian border, underscores how anti-government resistance continues to simmer even in areas recaptured by Assad’s forces. The fighting also highlights the limits of reconciliation efforts — long advocated and supervised by Assad’s Russian allies as a way to pacify the country — and the inability or unwillingness of Russia to keep Syrian government forces in check.

The latest round of violence has its roots in a decision by Daraa residents to call for a boycott of the May presidential election, which was certain to hand Assad a new term. Two days before the vote, opposition groups released a statement condemning the election as illegitimate and calling for a strike on election day, labeled “a day of sadness and mourning.”

The government’s response, although not immediate, was ruthless. Four weeks after the election, government forces imposed a months-long siege, seeing the military campaign as a chance to dismantle rebel networks still active in Daraa and push for the Syrian state to reestablish full control. The government’s notoriously ferocious 4th Armored Division, headed by the president’s brother Maher al-Assad, led the assault in coordination with Iranian-backed militias.

But Russia, which had backed the status quo in Daraa, was less enthusiastic. If peace could be restored, it might help Russia promote a diplomatic solution to the wider Syrian conflict. Some local observers said Russian warplanes, which usually fly in support of the Syrian military, were noticeably absent.

The conflicting aims among Assad and his allies made it difficult to negotiate an end to the fighting in Daraa, according to a member of the Daraa Central Committee, composed of former rebel fighters and members of the local civilian opposition.

“Negotiation was complicated because of the conflict of interests of each party,” said the committee member, who spoke on the condition of anonymity because of an agreement under a recent truce not to talk to the media. “But in general, they all agreed on imposing their own conditions [on us], which we did not accept and instead insisted on our demands of safety and dignity until the end.”

Daraa residents repeatedly appealed to Russia to intervene and enforce the three-year-old agreement, which dictated that the army and intelligence forces could not enter opposition areas. The Daraa committee urged Russia to help lift the siege, thwart “Iranian hegemony” in the area and stop Iranian-backed militias from storming neighborhoods.

In July, Russian Gen. Assad Allah, Moscow’s leading negotiator in Daraa, promised that Russia would block Iranian military advances if the committee met government demands, which included turning over light weapons, according to the committee member.

But he was replaced a month later by another Russian general, whose negotiating proposal did not include lifting the siege or ending the bombardment or the presence of Iranian-backed militias, the committee member said.

“The Russian approach to this round of violence was a remarkable shift in tactics and strategy,” said Dareen Khalifa, senior Syria analyst at the International Crisis Group. “They backed Damascus’s maximalist demands and showed no tolerance to what they framed as unrealistic asks from the rebels.”

Khalifa said the Russians may have been unwilling to try using their leverage with Assad’s government at a time when it seemed determined to pursue its own goals. “Put simply, there was a mismatch between what Damascus wanted and the political capital Moscow was willing to invest in it — and their perceived value in maintaining the status quo.”

Finally, on Sept. 1, a Russian-brokered truce was reached. The deal, which called for an immediate cease-fire and lifting of the siege, requires for the first time that rebels in Daraa surrender their light weapons and allows the government to establish army checkpoints inside the city. Residents who refuse to accept these conditions are to be deported to Idlib province in northwestern Syria, the only remaining pocket of rebel resistance in the country. The deal also provides for the deployment of Russian military police and the restoration of services such as electricity and water.

Even before the latest violence, Daraa had been uneasy. The city had been rocked by assassinations and intermittent clashes with the 4th Armored Division. But the Sept. 1 truce has given residents a chance to resume their daily lives.

A supermarket owner said his store had been closed for two months, unable to operate for fear of bombardment and an inability to buy goods. The siege had cut off water, electricity and communications, as well as wheat and other food items.

Abu Issam, 40, a pharmacist in Daraa al-Balad, finally returned home in recent days with his wife and four children to find that his house had been damaged. The solar panels on his roof had been destroyed, and the cost of repairing them would be prohibitive.

Issam said his pharmacy had been spared, and on Tuesday, he opened his doors after securing some medicine from nearby storage facilities. Almost no customers came.

“People are afraid, but I came back to fix up the place,” he said.