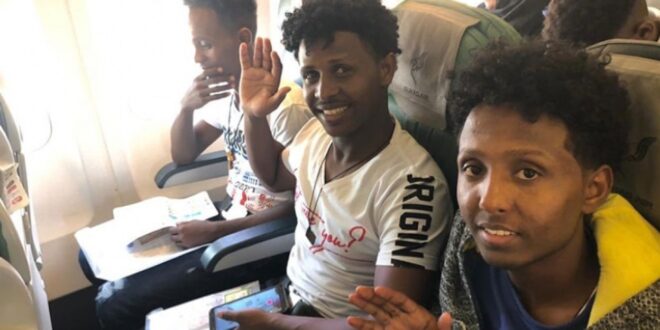 A system of abuse against migrants in Libya, carried out by militias and the government, is fueled by European Union money given to authorities in a country where violence has been normalized after years of instability, according to a new documentary to be released in October.

A number of migrants and refugees speak of the abuses and torture they suffered at the hands of Libyan militias in Libya: No Way Out of Hell by documentary filmmaker Sara Creta.

Their views are juxtaposed by militiamen, many who have now been absorbed into the Libyan army, who claim migrants under their watch “weren’t denied anything.”

Libya’s second civil war (2014-2020), triggered by a chain of events after the fall of Libyan strongman Moamer Khadhafi in 2011, saw parts of the north African country in tatters as militias jostled for position in an all-out war. Two main centers of power emerged–a UN-backed government in Tripoli, and forces allied to Khalifa Haftar in the eastern city of Benghazi.

Africans fleeing insecurity in their own countries, forced inscription, or other kinds of persecution have been coming to Libya in an effort to get across the Mediterranean Sea to Europe.

According to the IOM’s Missing Migrants Project, an estimated 1,093 migrants died this year while crossing the Mediterranean Sea along the Libyan coastline.

The film reveals that migrants who were placed in detention centers, such as Tajura, on the outskirts of Tripoli, were pawns during the war. In horrible conditions, with 600 people from 36 countries placed in one room, the men recount being forced to clean tanks and other military equipment.

“It was really clear that the militias were using these camps, especially Tajura during the war, as a military base. And there are videos of weapons being stored next to migrants and refugees, and armed vehicles that are inside the detention centers,” says Creta.

Tajura was targeted by a military airstrike on 2 July 2019, killing more than 50 migrants and refugees and wounding 130, according to official reports after the killing.

“We cleaned blood off the dead bodies,” says one migrant in the video after the airstrike, who spoke of forced labor overseen by the militias.

The documentary shows how the militias were looking for legitimacy in the name of migration in front of the EU and member states by agreeing to take care of the migrant facilities, but were in fact using the detainees as human shields, says Creta.

“I really wanted to show the normalization of violence and ill-treatment that is going on in the sense that those militias controlling detention centers is that their ultimate goal is to fight for power, political gain and to accumulate weapons,” she says.

“It’s very clear these groups are responsible for holding refugees and migrants in this condition, and at the same time, the European Union and the member states are complicit,” says the filmmaker.

She is referring to the EU migrant deal signed in February 2017 with one of the three Libyan governments in the country at the time. The deal, which would kick-start the treaty between Italy and Libya and include funding on stopping migration to Europe, would fund healthcare for migrants and rescue migrant boats.

“They are providing assistance to the Libyan coast guard, to Libyan authorities, to intercept people in international water and bring them back to Libya, when it’s known that they will be returned back to this inhumane and degrading treatment in the detention centers,” she says.

“We need to start talking about state complicity and human rights violations in terms of international law,” says Creta.

An official from Libya’s Migrant Office of Illegal Migration speaks on camera about the fact that Libya is one of the countries that never signed the 1951 UN Refugee Convention; anything done for migrants is not in accordance with any law.

“EU, Italy, other governments, and also partly the UN… have been contributing significantly to the abuse of migrants in Libya,” says Creta.

“Definitely the EU and member states are using the UN and the fact that the UN has access to these centers,” she says, adding, “I think the way that Europe should start to really reconsider this cooperation and these agreements with Libya.”

The migrant adds that he didn’t ask UNHCR for any money, but was saddened by the agency’s lack of solidarity. Others reflected on similar situations with the International Organization on Migration (IOM) who say that the UN group only suggested the migrants could go back to their home country. No alternatives or support were offered.

No Escape from Hell is unusual in the sense that there is very little voice over to describe a complex situation. Instead, Creta says she didn’t want to impose a particular view, but to give the floor to the EU officials, Libyan officials and militias, and refugees and migrants.

“I really tried to intertwine these three to give the audience as much as possible from the situation on the ground,” she says.

Filming on a shoestring budget, the Italian director spent most of her time on the ground in Libya shooting without a crew. She says this proved to be an advantage, especially when speaking with the migrants who had suffered during their time in detention.

“I had to build trust with survivors because it was hard for these people to speak about the violations when they were still stuck in Libya,” says Creta.

The migrants and refugees give their point of view of the events they have survived over the past three years in Tripoli, and some in Zintan, a town more than 200 kilometres south of Tripoli.

One migrant describes finding “less than nothing” in the restive Libyan capital, where he arrived to plan to get to Europe by crossing the Mediterranean Sea.

Constantly thwarted through the Libyan civil war (2018-2019), armed attacks in detention, and now living in the Gargaresh slum in Tripoli, migrant N’doka says, “when you see us, you see the people who lost hope.”

The one-hour documentary doesn’t always have someone talking; there’s the back story of the Libyan war and how it affected migrants as well as views of their daily life, where it reflects those who have lost hope.

Creta says that refugees and migrants are losing the ability to control their lives, blaming it on the European Union policies that fund Libyan authorities to prevent these people from crossing the sea to Europe.

One scene depicts refugees holding signs, saying “UNHCR what are you waiting for” and “we are dead but not buried yet”.

“The structural effects of these policies are the normalization of this treatment, and the use of camps where people are abused, it’s part of this new policy of externalization,” she says.

“They are stuck in this situation, and at the same time they are in the system of extreme abuse, where some of them spend years in detention,” says Creta, who has worked on the refugee crisis in Libya as a journalist and filmmaker.

“To spend three years of your life in a detention center without seeing the light or without the ability to move, or to eat, or to drink or to cook, you also lose the ability to think, actually. And to dream and to have control of your life,” she adds.

Torture is usually perceived as physical, according to Creta, and torture certainly exists in this way in the detention centers. But migrants are not receiving food or water, and are constantly humiliated, which are other forms of torture and mistreatment.

“European countries are deliberately paying Libya to prevent migrants from reaching European jurisdiction to ask for asylum,” she says.

“We should also start talking about complicity in these crimes against humanity, because they know that these people are being sent back to these detention centers that are governed by rape, torture and murder,” adds the filmmaker.