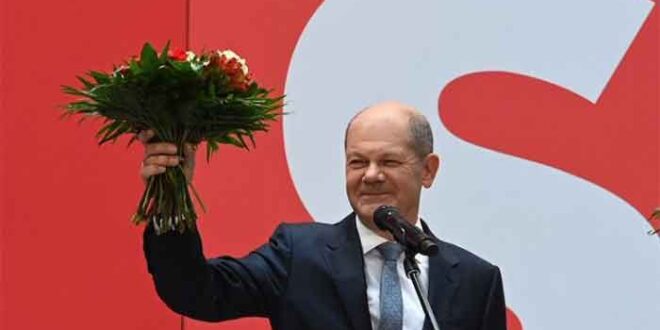 Rise of centre-left in Germany

The big take-away of Germany’s first election of the post-Merkel era is that none of the parties has ‘won’ and each of the parties has reason to look miserable and feel disappointed with their performance. A new political landscape is struggling to be born.

For the ruling Christian Democrats [CDU], this has been their worst ever performance in post-war history, faring significantly worse in every part of the country than they did in the previous election, in 2017. The party led the voting in just two of Germany’s 16 states, Bavaria and Baden-Württemberg in the south, down from 13 states in 2017; in several states, they fell to third place.

The Greens’ Annalena Baerbock is being blamed for failing to shore up and consolidate the huge surge in popularity she had enjoyed on her appointment as candidate in spring.

The liberal FDP saw only the tiniest increase in its vote. On the two extremes, both the far-right AfD and the left-wing Die Linke have lost heavily.

Notionally, the ‘winner’ should be the centre-left Social Democrats who won their first victory since 2002. Indeed, it ended up with the highest share of the vote (25.7%), which is a significant jump from the 2017 performance (20.5%) but ahead of the CDU by around two percentage points only. Importantly, that doesn’t mean that it will necessarily form the next coalition government. read more

In that sense, the Greens and the FDP can be called the kingmakers. In a significant political posturing, they have decided that they would first hold talks together. The chances are that they might opt for an alliance with the SPD, but one can never be sure when extraneous factors come into play in shaping the endgame.

In sum, what emerges is that Germany will have a 3-way coalition government but it will be formed only after much wrangling through several months. The chances are that the outgoing Chancellor Angela Merkel may still be around to give her 17th annual New Year’s televised address.

The German vote reflects the contradictions in the society. Germans definitely have opted for ‘change’ as the ignominious performance of the ruling party CDU tells. There has been a precipitous fall in the party’s vote share from 32.9% in 2017 to the 24.1% in Sunday’s election. No doubt, it is a mark of discontent.

But, paradoxically, Germans have also opted for predictability. The SPD and CDU which formed the current coalition have together polled 50% of votes! And it’s no secret that the leader of the SPD Olaf Scholz, finance minister in the outgoing CDU-SPD coalition government, is an alter-ego of Merkel in many respects with a reputation as having steady hands in a crisis. In a sense, therefore, isn’t this a mandate for “Merkelism”? Arguably, the mandate appears to prioritise moderation, stability and continuity. Scholz’s nickname, by the way, is “Scholzomat” — for his “dry, verging on boring, political style,” Washington Post wrote. read more

The German people witnessed unparalleled level of prosperity through the Merkel era. Yet, they are apparently not content with that. Their grouse is that Germany has a long way to go to ‘modernise’. Broadband speeds are slower than Albania’s and it became a big election issue.

Having said that, Germans also regard with trepidation the turbulence that is endemic to periods of ‘change’. The point is, Germans fight shy of being argumentative. But how can politics evolve on progressive lines without arguments?

Yet, in a historical perspective, Merkel remains an enigma. The common criticism is that she has “done nothing”, that she leaves no mark on history, unlike her predecessors — Konrad Adenauer (who led Germany’s post-war integration into the international community and laid the foundations of the European Union), Willy Brandt (proponent of ‘Ostpolitik’ that led to the detente with the former Soviet Union), Helmut Kohl (who built on Brandt’s foundational legacy and brilliantly achieved the re-unification of Germany.)

There is a kernel of truth here. Marion Van Renterghem, French journalist who authored a book on Merkel wrote in the Guardian newspaper: “She [Merkel] entered politics on a whim just after the fall of the Berlin Wall. An ordinary chemist, devoid of oratorical skills, charisma, political guile or even any particular agenda. And at 35, she found herself, by a quirk of history, in the right place at the right time. She knew what to make of it…

“Ambitious reform is certainly not in her DNA, and luckily it was not the priority the times demanded of her. Merkel showed she was more of a manager than a visionary.”

“Yet, as well as managing every crisis that came her way, she restored German prosperity… On Merkel’s watch, Germany also softened its image: from austere and unattractive to likeable. For 16 years, Merkel has made Germany happy. The first secret of her longevity in power is that she was entirely in tune with her country and her times. She was in the right place at the right time.”

But in the final analysis, what stands out in Merkel’s great legacy is the moral compass that she held to guide and navigate her politics. How many world leaders will show the moral courage to utter those three words “Wir schaffen das” (we’ll make it) to ask her country to take in a million refugees? Honestly, none.

Many things are up in the air with Merkel’s departure. In foreign policy, the focus will be on the fate of her “diplomatic mercantilism” with Russia and China. Russia’s business daily Vedomosti says the election will overhaul the political landscape in Germany and trigger a “political U-turn”. It adds,

“There will be no breakthrough in relations with Russia after the coalition government is formed -economic pragmaticism, despite existing difficulties, will be maintained while ideologically motivated criticism will be somewhat eased if the SDP dominates…”

The Xinhua news agency reported that the election results “indicated a more fragmented parliament.” It highlighted that SPD leader Olaf Scholz’s prognosis that he’d seek to form a so-called “traffic-light” coalition with the Green Party and the FDP “is seen as most likely”.

The big question is, how will such a “traffic-light coalition” in Berlin drive the European Union forward. This is going to be very crucial since the EU itself is calibrating its compass even as Euro-Atlanticism is on the wane and Europe’s confidence in the transatlantic leadership of the United States has noticeably diminished. An SPD-led coalition is bad news for Washington — and most unexpected. President Biden’s impromptu reaction showed it.