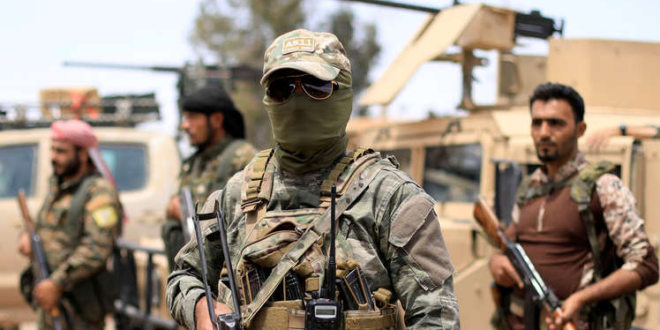 Despite President Biden’s remarks last week to the UN that the United States is at peace for the first time in 20 years, fighting continues against terrorism in the Middle East.

The US-led coalition conducted several operations against Islamic State fighters and support cells recently, even as the administration is trying to move the American troops from a combat role to an advisory one in neighboring Iraq.

According to Colonel Wayne Marotto, spokesman for Operation Inherent Resolve, in the past few days the international coalition had conducted raids and other operations that killed three ISIS fighters and captured five others.

This stands in sharp contrast to the president’s comments to the United Nations General Assembly a week ago when he said that the U.S. is entering a new era of “relentless diplomacy” in the Middle East.

“I stand here today for the first time in 20 years with the United States not at war,” Biden said to the UN. “We’ve turned the page.”

Marotto said the U.S.-led coalition provided reconnaissance support during raids in the eastern city of Raqqa on Sunday. This was confirmed by sources from the Syrian Observatory for Human Rights (SOHR) a U.K.-based watchdog of the Syrian Civil War.

A Series of Operations

SOHR reported that the coalition conducted an airstrike against three ISIS fighters in the vicinity of al-Shayhal in eastern Deir Ezzor province. As a helicopter dropped U.S.-backed Syrian Democratic Forces (SDF) forces, the SDF used loudspeakers to call out for the ISIS members, who were holed up in a house, to surrender.

Firing broke out but the SDF arrested the ISIS members and then burned the house.

In another operation, the SDF had intelligence that ISIS members were hiding close to an SDF Special Forces (H.A.T.) checkpoint. The ISIS fighters attempted to flee. The helicopters gave chase and after exchanging fire, the three terrorists were killed and two more arrested.

SOHR reported that the SDF conducted three simultaneous operations at Raqqa’s south, east, and western areas. These led to the arrest of three ISIS support cell members who had been transporting fighters responsible for planning and carrying out assassinations and terrorist attacks in the region.

SOHR also published photos of U.S. security patrols in al-Hasaka. Six armored MRAP vehicles conducted a routine security patrol before returning to their base. It was the first time that U.S. patrols have been in the city.

Meanwhile, in another part of Deir Ezzor, unidentified aircraft struck Iranian proxy militias affiliated with the Iranian Revolutionary Guard Corps (IRGC). The militias had been transporting Iranian-made “Volcano H2” missiles from their weapons warehouse near the al-Shibli archaeological site in the al-Mayadeen desert.

The official Syrian state-run media has not reported anything on this strike and has frequently denied the existence of any Iranian troop presence in Syria. SOHR reported that the strikes wounded 12 personnel who were evacuated to the nearby al-Shefaa hospital.

Reuters confirmed that panicked Iranian-backed militia fighters were patrolling the streets. They were put on heightened alert after ambulances were seen rushing to the desert outskirts of the city following several explosions. The militias told civilians in the area to clear the streets around the city center.

So, while the American government tries to find a way to withdraw from Syria and Iraq, American troops remain in war zones and are involved in the fighting. Syria has vowed to evict them by force if they don’t leave.