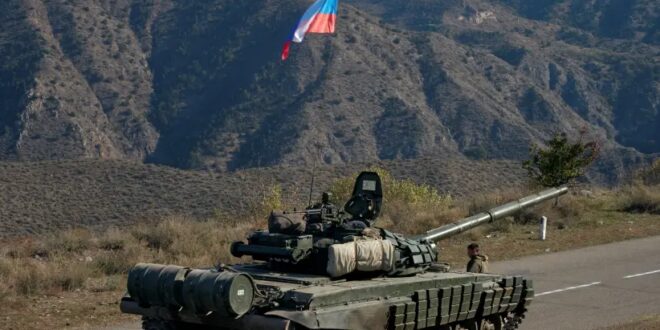 Tehran wants to send a message to Baku that “we know what you are doing.” And Iran has done this before.

Iran’s media has begun to up the rhetoric against Azerbaijan, with a headline claiming that Baku has “denied the presence of the Zionist regime near the border with Iran,” a claim that appears to contrast with its insinuation that Israel’s close relationship with Azerbaijan is a threat to Tehran.

The larger context is that Iran has carried out military maneuvers near the border with Azerbaijan and Armenia and hosted an Armenian delegation, signaling its commitment to a robust policy that wants the status quo maintained on the border.

What’s really going on here? A year ago, Azerbaijan launched a war against Armenian forces in the disputed area of Nagorno-Karabakh. In Baku’s view, backed by Turkey, the Armenians had for too long dominated disputed areas that they captured in the 1990s. In Armenian’s view, these were historical lands where Armenians lived and which the Soviet Union had arbitrarily made an autonomous part of the Azeri Soviet republic in the 20th century.

Regardless of who is correct in this dispute, it shares similarities to many others such as in Northern Cyprus, the West Bank and other places. What matters is that a rising and increasingly powerful Azerbaijan is asserting itself militarily.
Israel and Iran’s northern neighbor enjoy close relations and Baku has acquired a large number of Israeli-made drones in recent decades, becoming a pioneering drone power. Azerbaijan frequently shows off Israeli-made drones and boasts of their effectiveness. Recent videos posted online even appeared to show IAI Harop drones in launch formation on the back of trucks being toured by Azeri leader Ilham Aliyev, according to videos on Twitter.

Iran’s media claims the “Zionists” may be on Iran’s doorstep by working with Baku. But it also prints Azerbaijan’s denials. “Azerbaijan pursues an independent foreign policy and on this basis establishes relations with its neighbors and does not allow anyone to interfere in its internal affairs,” Aliyev said, according to Iran’s Fars News.

WHAT IS the point of Iran’s major media, linked to the IRGC, printing denials without printing the accusation? The reason Iran does this is because the regime is careful not to up the rhetoric and stoke tensions with Azerbaijan.

But Tehran also wants to send a message to Baku that “we know what you are doing.” Iran has done this before, leaking information to pro-Iranian militias in Iraq so that those militias have blamed Azerbaijan for being the base for alleged drone attacks on pro-Iran militias in Iraq.

Abu Mahdi al-Muhandis, leader of Kataib Hezbollah in Iraq, a key part of Iraq’s Popular Mobilization Units (PMU) claimed in 2019 that “we have accurate and confirmed information that this year, the Americans introduced four Israeli drones via Azerbaijan to operate within the US fleet to carry out flights and target Iraqi military bases.”

The Guardian reported at the time in August that “the development comes as Shia militants in Iraq claimed that Israel has used drones launched from Azerbaijan to attack targets in the north and center of the country – areas which regional officials say have become transit hubs for weapons being sent to Iranian positions near Israel.”

The US soon afterwards killed Muhandis and IRGC Quds Force head Qasem Soleimani in a January 2020 drone strike, the drone in this case being flown from the Gulf. The point here is that Iran and its allies in Iraq were already accusing Baku of being a base for Israeli drones back in 2019.

Now Iran is accusing Azerbaijan of similar activities. This comes in the context of regional Iranian attempts to harass and strike at Israel-linked targets, including attacks on shipping off the coast of Oman where Tehran used drones in July that killed two people on a ship, and an alleged plot recently in Cyprus.

IRAN’S MEDIA printed on Tuesday a long list of comments from Azerbaijan. “We demand respect for our sovereign rights and non-interference in our internal affairs,” the president of the Republic of Azerbaijan stressed. “The charges against us must be formally substantiated. Let them come here and find a foreigner… They claim that Azerbaijan has opened the door to Israel in these areas… Where did they see Israel here?”

This illustrates that Tehran is continuing to message about tensions with Baku. Iran wants Azerbaijan to stress the friendship between the two countries. Iran’s media prints claims that they share a historic friendship. “We do not accept allegations of the presence of third countries or any country near the Iran-Azerbaijan border, or the provocative actions of such forces, because such views have no basis,” a spokesman for Azerbaijan was quoted as saying.

Meanwhile, Minister of Foreign Affairs of the Islamic Republic of Iran Hossein Amir-Abdollahian, during the presentation of the new ambassador of the Republic of Azerbaijan to Iran’s credentials, stated that “we do not tolerate the active presence of the Zionist regime in Azerbaijan against Iran’s security.”

Iran has also carried out a military drill near the border. The Foreign Affairs minister had recently stated regarding the Iranian exercises on the border that “such exercises inside Iran are within the framework of Iran’s national sovereignty and clarified the Zionist regime’s movements along the joint borders of Iran and Azerbaijan,” according to Fars News.
“The Islamic Republic of Iran does not tolerate the presence and activities of the Zionist regime against its national security and will take any necessary action in this regard,” Iran said.

IRAN HOSTED Armenia’s foreign minister this week to hammer home its commitment to Armenia and to discuss the border tensions. While Yerevan stressed the need for open roads to its communities in Nagorno-Karabakh, Tehran discussed trade and other issues.

Trade and operation of the Armenian transit route is one of the important issues of the two countries, Iran said. “In defining the transit and truck routes of trade, we will not allow Iran’s relations with its neighbors to be affected by some foreign interference.”

The Iranian foreign minister then said he expressed concern over the presence of “the Zionists in the region…. Our region in the South Caucasus and our neighbor is still suffering from conditions, and the presence of the Zionists is a matter of serious concern to us.” He mentioned this several times, discussing foreign “actors” that were harming relations in the region.

Amir-Abdullahian emphasized that the region’s problems should be solved away from foreign interference, adding that, “considering the intense crises and also approaching the exit from the Corona crisis, we declare that our region will not tolerate new crises.”

It is not clear if Iran will want to press this issue further or if it feels it has said enough. Its desire is to send a message to Azerbaijan and show its commitment to Armenia. However, the Islamic Republic does not want to increase tensions with Turkey, preferring that these issues on the border be compartmentalized. This is because Iran, Turkey and Russia share other common interests in removing the US from Syria and also discussions about Afghanistan and trade.

Iran does not actually want to be a party to a conflict between Azerbaijan and Armenia: It wants to send messages and show where its redlines are.

Post Views: 76
Previous Is the Ron Arad announcement tied to Iran’s hitman in Cyprus? – analysis
Next Iran assassinating Israeli businessmen: What is the game plan? – analysis