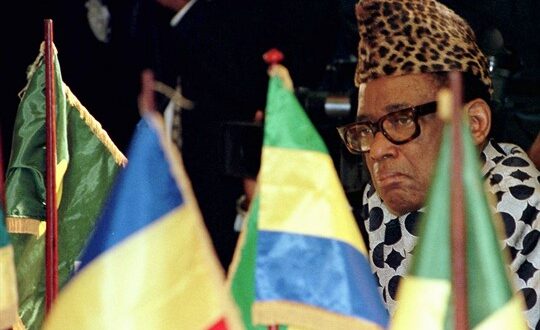 In Africa, Mercenaries Are Part of the Problem, Not the Solution

In 1997, after his longtime Western backers, Belgium and the United States, had abandoned him, Mobutu Sese Seko, the ruler of the country then known as Zaire, turned to mercenaries from Serbia and Ukraine in a desperate bid to beat back an accelerating insurgency.

In the middle of that war, I flew to Kisangani—the famous, centrally located river-port city that is a gateway to the vast country’s west—to watch the mercenaries drill Zairian troops and take up positions to repel an impending attack on the town. The mercenaries looked fearsome and seemed to have everything they needed to defend the city, from mortars and artillery to attack helicopters. The Zairian general in charge of the operation sounded sure of prevailing. “This is where their offensive ends,” he said of the Rwandan-backed rebels.

A day or two later, I flew back to Zaire’s capital, Kinshasa, drawn by urgent news there. As it happened, that was the day the rebels chose to attack Kisangani, and they made quick work of the government’s defense. “Around 7 P.M. all of the mercenaries disappeared from the hotel they were staying in, and next thing we knew all of the airplanes at the airport were in flames,” said a United Nations official I quoted in my report in the next day’s New York Times. “There have been bombs going off and lots of gunfire,” he added. “According to our information, the city is being looted right now.” A Zairian official I quoted in the same piece told me, “All of the generals have left Kisangani, by boat, by ground, by whatever means. Who knows what will happen here tomorrow?”

This story from Zaire, soon afterward renamed the Democratic Republic of Congo following the rebels’ rapid takeover of the country, is relevant today, more than two decades later, because a version of it is playing out in slow motion in another part of the continent, Mali. The interim post-coup government of that Sahelian West African country, long besieged by Islamic insurgents, has recently turned on France, its longstanding security partner, accusing it of not doing enough to help it. Now, in order to fight back the irregular forces of its enemies, it is suddenly turning to the Russian private military contractor, the Wagner Group, for assistance in a mercenary-type setup not so different from the one I witnessed in Kisangani, infuriating France in the process.

As someone who has seen this kind of situation play out not just in Zaire, but in several African countries, I have every expectation that it will end in disappointment or disaster for the Malians, as it did for Mobutu and others.

I say this out of no special disdain for the Russians nor fondness for France’s behavior in Africa, a topic I will return to. The skepticism is due, rather, to a feeling that in almost every case where an African government has had recourse to mercenaries, it is in response to having previously misdiagnosed its own problems. Mobutu’s failure to turn back the insurgents engulfing his country, like Mali’s inability to beat back its Islamic insurgency, was not due to any lack of equipment or training. Their failures were brought about instead by the inability of the state to validate itself in the eyes of its own citizens by consistently being on their side. This takes much more than military competence. It means, among other things, providing a steady mix of dependable social goods and services, from education and health to better roads and electricity.

Leaders who resort to mercenary-type solutions are almost always perceived as distant from the population and unconnected from their preoccupations. They give the impression of being most concerned with their own status and welfare, rather than that of their people. Public revenues become their plaything. Their electricity never gets cut off, because they get it from big, private generators and other off-grid solutions. Their children often go to school or live overseas. And at the first sign of a health problem of their own, they jet off to Paris or London or somewhere else in the West for specialized care, having never bothered to invest in medical care at home.

For many years now, the West has been under the illusion that through something called “capacity building” it could stand up governments in Africa that would serve Western causes better, and hopefully do a better job for their own citizens. That second item, though, has always been an afterthought. Recently, the West’s priorities have turned to fighting Islamic radicalism in Africa and slowing down migration from the continent to Europe. In Mobutu’s era, while he was still in good odor with his patrons, the priority was blocking advances by the Soviet Union in Africa. Once a relationship gets established on this basis, moral hazard begins to creep in, and the priorities that had to do with the welfare of the citizens of African countries themselves begin to pale in comparison with the urgent need to pursue the West’s own external goals.

Mobutu’s Zaire is a rare case when the West finally abruptly pulled the plug, but that was only after three decades of rule by the man who had perhaps been Africa’s most corrupt dictator during his era and had left his country in near total ruin.

No Western country has found itself in this kind of situation as often as France, which is desperate to maintain a collection of patron-client relationships in Africa not only for the reasons of immigration and radicalization cited above, but because of a deep-seated feeling that its own standing in the world as a near-great power absolutely depends on this.

The effects on African states of accumulating moral hazard, though, is deeply corrosive. Knowing that you can farm out your essential security needs to a foreign patron, or that your capital will not be allowed to fall to opponents, or that you will always have secure passage to a gilded exile if things get really ugly, does the opposite of building a state; it hollows one out.

In the end, there can be no substitute for the will of people, and yet these only nominally post-imperial relationships cut the people out of the picture. To be effective, a leader has to win the respect of his or her people through something more meaningful than formal but ultimately shallow expressions of democracy. The government has to be seen as caring and effective and non-corrupt in delivering services. If not, the foreign patron will be stuck propping it up forever, and the moment that support slackens, the client will fall.