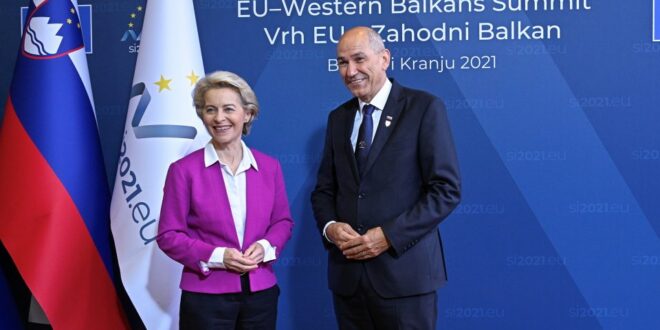 The vision of a united Europe cannot be completed without the Western Balkans. In that context, the leaders of the European Union need to set a date for the start of accession talks with North Macedonia and Albania as soon as possible. Alas, we’ve heard a lot of promises in the past few years, but seen less in terms of commitment.

Europe’s leadership often emphasizes the region’s strategic importance, something that is, after all, confirmed by the repeated and varied interventions of outside factors, particularly when it comes to elections.

At the EU-Western Balkans Summit that ended in Slovenia on Wednesday, Commission President Ursula von der Leyen clearly stated that the “European Union is not complete without the Western Balkans” and that this is a region that cannot be separated from the rest of united Europe, with which we “share the same history, the same interests and values.” “I’m deeply convinced we also share the same destiny,” she added.

Of course, credible reforms safeguarding the tenets of democracy and rule of law must be implemented and corruption clamped down on – these are moves that will first and foremost benefit the citizens of these countries. And while it is true that delays have been observed to this end in most countries, foot-dragging is a two-way street.

The further away the prospect of accession seems, the harder the job of the pro-European politicians in these countries to sell much-needed and often painful reforms as a prerequisite for induction. This, in turn, takes some of the shine off the EU in the eyes of many citizens.

What happens with the Western Balkans is of direct interest to Greece, as accession would help heal chronic wounds and normalize bilateral and multilateral relations, to the benefit of all.

Slovenian Prime Minister Janez Jansa, whose country holds the rotating presidency of the EU Council, noted that if we want to keep the region’s European prospects alive – as defined by the 2003 Thessaloniki Declaration – three things need to happen: The EU has to demonstrate its ability to deal with its enlargement effectively, bilateral disputes like those between North Macedonia and Bulgaria or Serbia and Kosovo need to be resolved, and the accession process needs to get going so as to facilitate the path of reforms.

The EU is not being elusive. It’s there. It recently helped the Western Balkans with money and vaccines to deal with the pandemic. That said, it needs to draw up a realistic timeline.

Greece, for its part, has rightly assumed a leading role in favor of accession, something that improves its standing not only among its EU peers, but, more importantly, with the citizens of neighboring states.

Greece: “The night of the fire I realized that Europe does not have humanity”

One year ago, Europe’s largest camp for displaced people—Moria camp on the Greek island of …