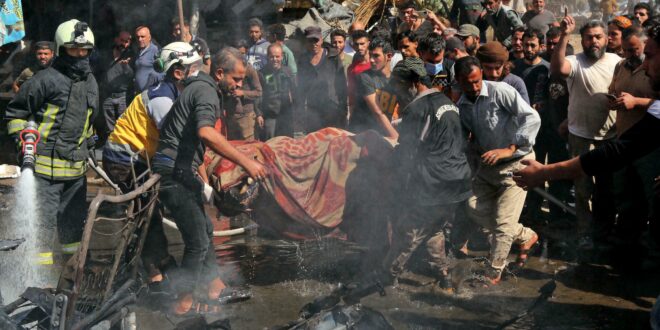 A car bombing in the northern Syrian city of Afrin on Monday killed six people, including at least one Turkey-backed rebel fighter, a war monitor said.

An AFP video journalist saw civil defence members douse the charred remains of a car with water, as rescue workers carried away what appeared to be a victim’s remains under a blanket on a stretcher.

Afrin, like all Syrian areas held by pro-Turkish rebels, is the scene of regular targeted killings, bombings and shootings that largely remain unclaimed.

On Monday, an explosives-laden vehicle detonated in “an area crowded with civilians” in the centre of the city, said the Britain-based Syrian Observatory for Human Rights.

The explosion hit near a market and military outpost for the hardline Jaysh al-Islam rebel group, according to the monitor which relies on a network of sources inside Syria.

At least two civilians and one Jaysh fighter were among those killed, while 12 other people were wounded, the Observatory said.

According to the Observatory, a local police force in Afrin arrested two young men suspected of involvement.

Last month, Afrin was hit by four separate attacks using explosive devices, including one targeting the vehicle of a rebel commander.

Turkey and its Syrian proxies have seized territory inside Syria in several military operations since 2016 against the Islamic State (IS) group and the Kurdish YPG militia.

In March 2018, they seized the town of Afrin after pushing out Syrian Kurdish forces.

The conflict in Syria has killed nearly 500,000 people since it started in 2011 with the brutal repression of peaceful demonstrations.