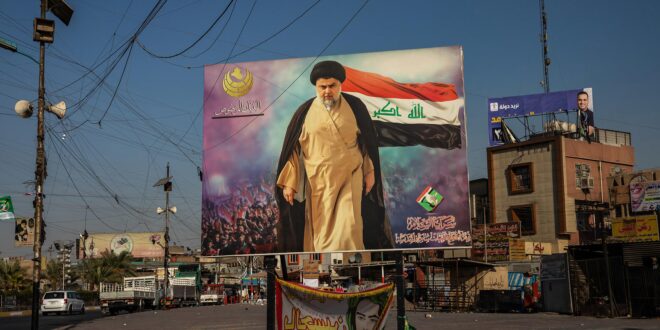 Muqtada al-Sadr, a Shia cleric whose Mahdi Army followers battled U.S. forces during the years of the occupation, made big gains in Iraq’s parliamentary election on October 10. His victory could pose problems for the United States and Iran. But despite the Sadrist List’s electoral success, it is not a given that al-Sadr’s list will form the government, or even be the only kingmaker. USIP’s Elie Abouaoun examines the outcome of the election, the electoral process and the implications for Iraq’s future.

According to the latest results, Muqtada al-Sadr’s Sadrist List has the largest number of seats in the new parliament.

What is al-Sadr’s platform, and what does his increased influence mean for Iraq?

Al-Sadr’s political platform is a loose constellation of tribal and political figures. It is true that al-Sadr’s list won the largest number of seats, but this is not a guarantee that he will be able to form the largest coalition in the parliament in order to impose the name of a prime minister. His natural allies — Ammar al-Hakeem of the Alliance of National State Forces and former Iraqi Prime Minister Haider al-Abadi — suffered devastating losses with five seats down from around 40 in the outgoing parliament. The lists considered close to Iran may be able to gather around 80 seats. If they manage to build such a large coalition, al-Sadr will find it difficult to claim he has the largest bloc.

As for the implications of al-Sadr’s increased influence, I think that it will not be easy for him to translate this populism into actual political leverage; such leverage requires a clear vision, well-articulated agenda, steady alliances and a solid institution to support the tedious work that needs to be done. At this stage, it looks like many of these assets and attributes are missing in al-Sadr’s movement.

Prior to the vote, there were numerous concerns regarding turnout and the administration of this election. How did the electoral process unfold?

The concerns about turnout proved to be true. In general, turnout was quite low. The Independent High Electoral Commission changed the criteria used to determine turnout, from the total number of eligible voters to the number of people who hold voter ID cards. With this change, the turnout is now officially at 43%.

Voting on election day went more or less smoothly. With the exception of one serious incident in Steih-Kirkuk, there were no reports of other major incidents. This does not mean that the electoral process went smoothly. The process includes what happens both before and after an election. The pre-election period was marred by assassinations, intimidation, threats, bribery and unequal access to media. The post-election period has seen confusion around the vote count and manual vote counts being conducted with few safeguards. This has resulted in several groups contesting the results of the elections.

Estimations — ranging from 20 to 40 — about how many seats were won by independent candidates are contradictory and not accurate. Given the lack of clarity about whom to consider an independent and how many of the victorious candidates will resist the temptation of joining a well-established parliamentary bloc, defining the success or the failure of the independents in Iraq’s 2021 elections remains in the realm of speculation. Such a determination can be made only after the appointment of a prime minister, which is when the consistency and cohesion of the independent candidates will be tested.

The elections were held early in part to address the ongoing protest movement that dates back to October 2019. How have protest leaders reacted to the results, and are there indications that the new parliament might deliver the change Iraqis are demanding?

The makeup of the new parliament is much closer to the old establishment against which Iraqis protested in the streets. Of all the demands put forth by the key figures in the October 2019 protest groups, only the promise of early elections has been fulfilled. Many other demands, notably investigating the shooting of protesters and the need to bring the perpetrators of those incidents to justice, the demand for reforms, more inclusive governance, and curbing corruption, still need to be addressed. There has been limited progress on these demands.

Beyond the Sadrist List, which groups have seen the largest shifts in seats?

Besides al-Sadr’s victory, the most significant changes include a substantial increase in the number of seats won by former Prime Minister Nouri al-Maliki’s State of Law list, a sizable win for the outgoing speaker of parliament Muhammad al-Halbousi’s Taqaddum party, and devastating losses for the Iran-backed Fateh list as well as the al-Hakeem-al-Abadi alliance. Despite these major shifts in numbers, the overall power equation has not changed much. Fateh’s losses are compensated by al-Maliki’s gains and the losses of the al-Hakeem-al-Abadi alliance are compensated by al-Sadr and al-Halbousi’s successes.

As expected, Massoud Barzani’s Kurdistan Democratic Party (KDP) asserted not only its pole position among Kurdish parties by getting the largest number of seats compared to others, but most importantly it proved that the small splinter parties — Goran (Change), New Generation etc. — are not viable options for the Kurds, whose interests will continue to be mostly upheld by the dual coalition between KDP and the Patriotic Union of Kurdistan (PUK).

What do these results mean for the government formation process, and who might we see as candidates for prime minister and other major positions?

As a prominent Shia politician once told me, the selection of a prime minister does not depend on the elections as much as it depends on an intra-Shia consensus, usually facilitated by the Iranians. I do not see why the 2021 experience will be any different. It is too soon to know who has the best chance of becoming prime minister. For now, all politicians are focused on making sure they enter into tactical, time-bound alliances so they can claim to have the largest bloc in parliament.

How do these results affect Iraq’s relationship with both Iran and the United States, as well as other regional actors?

The results announced so far are interpreted by many as a big loss for the Iranians. While this could be true at the tactical level, I do not see it as a major loss for them. Fateh, al-Maliki and Khamis al-Khanjar, the leader of the Parliamentary Azm Alliance — all considered to be close to Iran — still have a sizable bloc (25% to 30% of the total seats in parliament) which makes them a de facto partner in decision-making. In Iraq, simple majority rule does not really work. Most of the decisions are taken by consensus.

Al-Sadr might be in tactical disagreement with the Iranian regime, but he will not engage in a hostile way against the Iranians. Neither will the KDP nor al-Halbousi. So, at the end of the day, Iran still has a strong foothold in Iraq.

Moreover, al-Sadr’s platform is not as coherent as some think. It can be easily fractured by the Iranians, who continue to enjoy an excess of power through the pro-Iranian units of the Popular Mobilization Forces. They will use it to facilitate finding a common ground among Shia parties, all of whom will emerge as “victors.”

It is too soon to judge how Iraq’s relationship with the United States will be affected as a result of this election. What is clear though is that the Iranians will continue using Iraq to pressure the Biden administration, at least as long as the Vienna discussions do not lead to a lifting of sanctions on Iran. I believe that the Iranians will make sure that

Challenging the United States in Iraq remains within a certain ceiling, in a way that the prospects of an agreement with the Americans on lifting sanctions are not undermined.