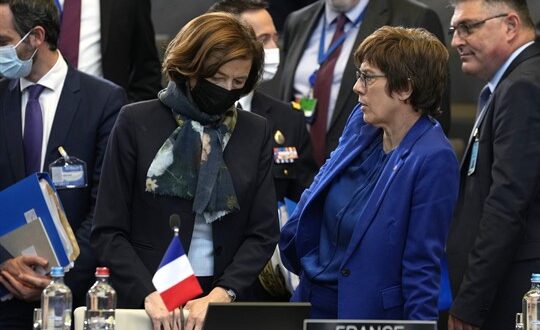 The NATO defense ministers who met yesterday and today in Brussels had a long list of issues to discuss, from the alliance’s role in confronting a rising China to its plans for countering a resurgent Russia. But NATO is also confronting more fundamental questions about its identity that have taken on greater resonance in recent months. Prominent among those questions is what Europe can and should do for itself to provide for its security and defense.

The idea of European strategic autonomy, or reduced dependence on the United States for security, is currently associated with French President Emmanuel Macron, one of its most vocal advocates these days. Although the concept dates back to France’s 1994 defense white paper, interest in it has been revived lately because of developments that have left Europeans uncertain about Washington’s reliability.

This became particularly evident during the presidency of Donald Trump, who openly derided NATO. That prompted Macron to warn that Europeans would “no longer be in control of [their] destiny” unless they got serious about defending themselves. Trump’s February 2020 agreement with the Taliban—which included a reduction of U.S. troops in Afghanistan to 8,600 within 135 days and the removal of the rest, allied and coalition forces included, over the next 14 months—also perturbed Europeans, who felt their views on the timeline seemed not to matter.

Despite high expectations, things didn’t change following the election of President Joe Biden. On April 14, he announced he would follow through on Trump’s agreement, pledging to bring U.S. troops home by Sept. 11. He later moved that deadline up to the end of August. Following the Taliban’s rapid takeover of Afghanistan in mid-August, the final weeks of the evacuation proved chaotic, prompting prominent European leaders to characterize it as NATO’s “greatest debacle” and complain about insufficient consultation. Josep Borrell, the European Union’s foreign policy chief, called it “a wake-up call” for Europe, which he said must “invest more in its security capabilities and develop the ability to think and act in strategic terms.”

Meanwhile, the antagonism between the U.S. and China, which revved up during Trump’s presidency and has continued under Biden, led Europeans to worry that Washington would fixate on countering China in the Asia-Pacific, to their detriment. Biden’s moves to strengthen the Quadrilateral Security Dialogue—better known as the Quad, comprising the United States, Australia, Japan and India—was one sign that American priorities were changing; the grouping has held two leaders’ summits, a virtual one in March and an in-person gathering in September, since Biden took office. Another sign was the formation of the trilateral AUKUS pact among the U.S., the U.K. and Australia, which involved Australia canceling its $60 billion contract for 12 French-built diesel-electric submarines, in favor of nuclear-powered ones from the U.S. and the U.K. Macron, blindsided and humiliated, recalled his ambassador to Washington and urged Europe to stop being “naïve” and prepare “to take care of its own protection.”

Will such episodes corrode trans-Atlantic trust enough to get Europe to actually take steps toward achieving strategic autonomy? The answer is no—for four reasons.

The idea that Europe is somehow unable to defend itself, however, isn’t one of them. Collectively, Europe has ample means to do so, especially given the far-reaching changes in the European balance of power since the late 1980s. The Soviet Union and the Warsaw Pact have vanished. The Eastern European states that were once controlled by the USSR have joined NATO, as have the Baltic states, all three of which were once Soviet republics. Under President Vladimir Putin, Russia has rebounded from the economic collapse of the 1990s and has substantially rebuilt its military might. But its GDP is still less than Germany’s, whether calculated in terms of purchasing power parity (PPP) or market exchange rate. The economies of Italy, France and Germany combined are more than twice as large when calculated in PPP, and five times larger when calculated based on market exchange rates. Meanwhile, though the GNP of the EU—most of whose members belong to NATO—is smaller than that of the United States, the difference isn’t staggering, particularly when calculated in PPP.

Europe also retains substantial technological prowess, despite concerns that it is becoming less innovative. European defense industries produce and export a wide array of advanced weaponry, with European countries accounting for five of the world’s 11 biggest arms exporters between 2016 and 2020. And though defense spending has fluctuated since the Cold War ended and its inventories of major armaments fell, Europe has the resources to rebuild its defenses—and without undue strain on the economy. Defense spending in the EU ranges from 2.1 percent of GDP to 0.2 percent, with the median at 1.2 percent, leaving plenty of room for larger budgets if so desired.

To be sure, there are variations among European countries’ threat perceptions—Russia, terrorism, refugee inflows and climate change, for instance—as well as the appropriate response to them. But the contention that this precludes a common defense strategy is wrongheaded, not least because such differences exist within NATO as well, even as regards Russia.

What, then, are the impediments to European strategic autonomy?

One is Europe’s lack of political will to make the concept a reality. Having relied on the U.S. defense guarantee since NATO’s creation in 1949, Europeans have become habituated to the arrangement, which has, after all, served them well. Why mess with it, especially if strategic autonomy may require increased defense spending, which doesn’t hold much appeal? At NATO’s 2006 Riga summit, member states, acceding to U.S. pressure, adopted a “guideline” to allocate 2 percent of their GDPs to defense, a threshold met by only seven of its 26 members at the time. That goal was reaffirmed at the 2014 Wales summit, where 2024 was set as the target date for achieving it. Yet 14 years after the Riga conclave, only 10 members meet the 2 percent target, while 18 out of NATO’s 30 members spend 1.6 percent or less of their GDP on defense—including Germany, at 1.57 percent in 2020, notwithstanding the scathing assessments of the Bundeswehr’s military preparedness.

A second obstacle is minimal intra-European coordination in defense production, which, by reducing duplication and costs, would exploit individual nations’ comparative advantages. In fairness, the EU has launched initiatives such as the 2017 Permanent and Structured Cooperation, or PESCO, and the European Defense Fund, both designed to foster collaborative production as well as research and development. Nevertheless, national perspectives and the economic interests of domestic defense industries still prevail in policy planning, aided by Article 346 of the EU Treaty, which accords an EU government the right to take “such measures as it considers necessary for the protection of the essential interests of its security which are connected with … arms, munitions, and war material.” The authority of EU institutions, so prominent in economic and social policy, is minimal in defense production: In 2019, only one-fifth of all weapons procurement involved cross-national cooperation.

The third barrier to strategic autonomy results from differences within Europe over what the United States’ role in the continent’s defense should be. Though proponents of strategic autonomy don’t intend it to be an alternative to a U.S.-led NATO, the fear looms large among more skeptical countries that it will eventuality sever America’s defense ties to Europe. Nowhere is antipathy to strategic autonomy, driven by this apprehension, stronger than in the Baltic states—Estonia, Lithuania and Latvia—and Poland. All four want a permanent, rather than rotational, U.S. military presence on their territory, including bases, and have offered to foot the bill for it. They have lobbied for this with heightened intensity ever since the 2014 Ukraine crisis, but their troubled history with Russia—whether tsarist, Soviet or post-Soviet—ensures that their apprehensions will persist even if a settlement in Ukraine magically emerges. Without a consensus in Europe about the United States’ long-term security role, strategic autonomy won’t get far.

The fourth impediment to European strategic autonomy is the United States. This may seem odd given Washington’s calls—reaching back to the Kennedy administration—for increased European defense spending. But the U.S. has historically distinguished between greater burden-sharing on defense and European strategic autonomy. Washington hasn’t merely failed to encourage the latter, it has steadfastly opposed it, including under Trump—repeatedly. The United States’ global primacy rests partly on Europe’s reliance on it for the basic requirements of security. And because of its outsize role in guaranteeing the continent’s security for more than 70 years, Washington has had leverage over Europe on numerous fronts—as former President John F. Kennedy, for one, noted starkly. The U.S. won’t surrender this advantage easily, barring a sea change in its worldview.

So European foes of strategic autonomy can rest easy, but they should prepare for two eventualities that could follow from sticking with the status quo. If tensions between China and the U.S. get worse, which is very likely, Washington will push its NATO allies even harder to demonstrate solidarity on a host of issues. And Beijing can and will make doing so as costly as possible, in many ways. Furthermore, a China-driven defense strategy could divert Washington’s attention and military assets away from Europe. Thus, like it or not, Europeans may yet be forced to take strategic autonomy more seriously.