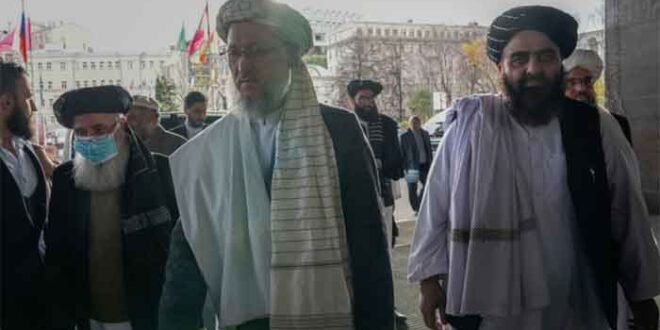 The Moscow meeting of ten regional states and the Taliban officials on Wednesday has produced an outcome that by far exceeds expectations. The salience of the consensus opinion is four-fold, as reflected in the joint statement issued after the event:

Then, there is the ubiquitous geopolitical angle. Simply put, the Biden Administration has lost the plot. The Fox News flashed that “The Taliban won the backing from top US adversaries.” Second, the forceful regional initiative undermines the Western prescriptive attempts to pressure the Taliban government.

Third, Moscow has taken the high ground as the principal mentor, guide and guardian of the collective interests of Afghanistan’s neighbours. The Taliban delegation warmly welcomes this. Fourth, the door is not only slammed shut for establishing any form of US military presence in Central Asia but the regional states are opposed to any foreign power violating Afghanistan’s sovereignty, independence and territorial integrity.

Finally, against the backdrop of the Moscow conference, the newly created forum of foreign ministers of Afghanistan’s immediate neighbours — Pakistan, Iran, Turkmenistan, Uzbekistan, Tajikistan and China — gains traction as the locomotive to navigate the path forward.

The next meeting of the forum is scheduled for October 27 in Tehran. It will be an in-person event and in an expanded format it will henceforth also include Russian Foreign Minister Sergey Lavrov!

Before the Moscow conference, Lavrov had met with the Taliban delegation. According to the Acting Taliban Foreign Minister Amir Khan Muttaqi, “we have good relations with Russia. We discussed various issues, including economic ties, trade between the two countries and the policy of the new Afghan government at large, aimed at using the location of Afghanistan to stimulate trade between the countries of the region and ultimately the economic integration.”

Lavrov’s opening remarks at the conference testify to the high comfort level Russia feels today vis-a-vis the Taliban government. In his words, “A new (Afghan) administration is in office now. This hard fact places great responsibility on the Taliban. We note the efforts they are making to stabilise the military-political situation and to ensure the smooth operation of the public governance system… the new balance of power in Afghanistan which took root after August 15 has no alternative in the foreseeable future.”

From such a perspective, Lavrov signalled, “We plan to engage our capabilities, including the capabilities offered by the UN, the SCO, the CSTO and other multilateral entities… Importantly, both the SCO and the CSTO have a special mechanism that was created many years ago, which is dedicated to interacting with Afghanistan, and identifying ways to promote stabilisation in that country… We are content with the level of practical cooperation with the Afghan authorities…We are grateful to the Afghan authorities for their assistance to our journalists… We will continue building business relations with Kabul with a view to resolving urgent bilateral issues.” read more

Clearly, the emphasis has shifted from the advocacy of “inclusive government” and the issue of formal “recognition” to the imperative need of averting a humanitarian catastrophe. It is hugely significant that the influential politician who voices the Kremlin opinion, Valentina Matviyenko (speaker of the Russian Federation Council) stated yesterday that

“The Taliban have come to power, they are controlling the entire country and it is necessary to hold a dialogue with them, it is necessary to meet with them… The issue of recognition or non-recognition today is not the priority act. I think, that if as a result of this dialogue the Taliban accepts those conditions I mentioned, not just approves in writing but implements in actions, I think that this will be, of course, their recognition since nowadays they are the actual power there.”

Indeed, whereas the US has been harping on the recognition issue as a bargaining card to pressure the Taliban, the Moscow conference has deftly undercut the US plank. The Biden Administration will be increasingly hard-pressed to lift the sanctions at some point.

The Moscow conference pointedly called on the US to “shoulder” the costs of financing humanitarian needs in Afghanistan. President Putin hit hard when he said yesterday that “the primary responsibility for what is taking place there (Afghanistan) is borne by the countries that fought there for 20 years. And the first thing that they should do, in my opinion, is to unfreeze Afghan assets and give Afghanistan a possibility to solve top priority social and economic tasks.”

In the final analysis, the Moscow conference has blocked the path of any unilateral interventionism by the US in Afghanistan — either through “out-of-the-region” military operations on the pretext of fighting terror groups or by undermining the Taliban government’s unity and cohesion through covert operations with the help of groups such as ISIS (as had happened in Syria) and thereby create the alibi for direct intervention in future.

Paradoxically, the regional states have become stakeholders in the stability of the Taliban government. China, of course, has been urging such an approach. Conceivably, despite the daunting challenges, Moscow also senses the merit in the argument that the Afghan economy can eventually be turned around as an engine of growth.

A recent commentary by the Global Times noted, “Afghanistan has strong development potential and is worthy of investment…the country is rich in mineral resources… if Afghanistan can rely on minerals mining to overcome fiscal challenges, it will be conducive to regional stability and serve China’s interests. Whether Chinese enterprises invest will largely depend on whether Taliban can effectively ensure safety of domestic production and construction, maintain social order, provide security and fight terrorism to win back investors’ confidence.” read more

The bottom line is that the Taliban can justifiably draw satisfaction that the Moscow conference has virtually made the so-called “legitimacy aspect” of their government a non-issue.

The alchemy of constructive engagement is such that it will incrementally amount to de facto recognition, especially if the UN were to convene a donors’ conference. In sum, the Moscow conference has made sure that the US’ obdurate, vengeful stance against the Taliban will become unsustainable with the passage of time.