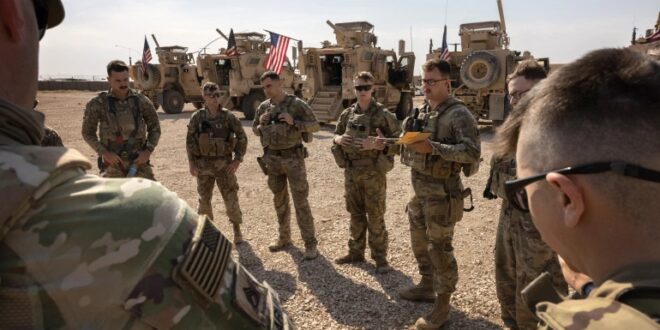 Speculation has been rife American forces would withdrawal from Syria after the Afghanistan pullout in an effort to end ‘forever wars’.

The United States will not be withdrawing its roughly 900 troops from northeast Syria any time soon, despite mounting speculation it would do so following its much-maligned August pull-out from Afghanistan, according to officials with knowledge of the Biden administration’s plans.

In recent weeks, Syria-watchers have pondered whether President Joe Biden’s hallmark decision to end the US’s longest-ever war, in Afghanistan, which saw the last American aircraft leave Afghan airspace on August 30, may presage a similar retreat from Syria.

Officially, the US has 900 troops in the country’s northeast, whose mandate is to help Washington’s local counterterrorism partner, the Kurdish YPG-led Syrian Democratic Forces (SDF), ensure the enduring defeat of the armed group, ISIL (ISIS).

US forces were first dispatched to the region in 2014-15 under former President Barack Obama to provide material support to local Arab and Kurdish fighters in the fight against ISIL.

In October 2019, following the group’s territorial defeat, former President Donald Trump announced a withdrawal of US forces from northeast Syria, triggering a Turkish offensive in the area against the SDF, which Ankara has long argued is a threat to its security because of the YPG leadership’s connections with the Kurdistan Worker’s Party (PKK), a designated “terrorist” group.

However, following criticism at home and abroad, Trump pivoted and agreed to keep US troops in the area.

Now, some analysts contend that Biden’s push to end the post-9/11 “forever wars”, bolstered by a seemingly strong desire among the American public to see their country disentangle itself from military engagements in the Middle East, could mean that withdrawal from Syria is once again on the foreign policy agenda.

Yet, according to the assistant of a senior official who works on Middle East policy in the Biden White House’s National Security Council, such thinking “over-extrapolates from the experience in Afghanistan”.

“People talk about how we’re pursuing an end to endless wars as if we’ve got this strategy to totally abandon all our commitments in the Middle East. This is frankly false and simplistic … Surprisingly, we know that Afghanistan and Syria are two different places, and that’s why our policies [towards each] were, and are, very different,” the official told Al Jazeera, speaking on condition of anonymity because of the sensitivity of the subject.

“The size and nature of our objectives, the depth of our involvement and the kind of environment we’re operating in [in Syria] are just totally different,” the official added.

Al Jazeera was told that “assurances” that the US will not depart have also been transmitted to the leaders of the SDF.

According to Kino Gabriel – who until recently was the SDF’s spokesman but remains close to the organisation – meetings were held between the leadership and “different sectors of the US administration”, including military and political delegates, regarding the future of the US’s ground presence.

“They (the Americans) were very strong to make it clear that this is not the same as Afghanistan,” said Gabriel.

Recent analyses have focused on how geopolitical dynamics, such as the intensification of Turkey’s efforts to wipe out the SDF in Syria’s north, or Russian attempts to convince the YPG to abandon its American patron and reconcile with the regime of President Bashar al-Assad, could alter the US’s strategic calculus, ultimately encouraging Washington to cut its losses and withdraw.

However, these analyses do not address the role of domestic political pressure.

Unlike the withdrawal from Afghanistan, which had been supported by majorities among the American electorate for years, particularly since the 2011 killing of Osama bin Laden, most Americans have expressed support for the counter-ISIL mission in Syria and Iraq, indicating that Biden may face less pressure from “the bottom up” to expedite a Syria retreat any time soon.

The kind of mission being pursued also matters. Nation-building of the type pursued in Afghanistan has proven to be a deeply unpopular objective at home, whereas, as some analysts have observed, Americans appear willing to suspend scepticism about intervention abroad when it comes to fighting al-Qaeda and ISIL fighters.

It is also questionable whether the Biden administration, and indeed the president himself, would be willing to receive another lacerating in Congress so soon after being heavily condemned in both the House and the Senate, not to mention the national press, for the decision to withdraw from Afghanistan.

As one aide to a Senate Democrat who sits on the Armed Services Committee told Al Jazeera, “On the heels of Afghanistan, the administration is unlikely to be prepared to take another beating in Congress, which would likely be more bipartisan … There are pretty strong feelings in both parties that we should exercise full leverage, including our military presence, until a serious political process is well under way [in Syria].

“From what I hear, when it comes to the issue of our boots on the ground, the White House is on the same page,” the aide added.

Biden’s political history may also predispose him towards keeping troops in Syria for the time being. During his tenure as vice president in the Obama administration, Biden was involved in the withdrawal of US combat troops from Iraq in December 2011, without leaving a residual counterterrorism force.

Later on, this decision was credited as having helped to create a vacuum for the reemergence of al-Qaeda in Iraq, which later grew into ISIL.

While ISIL has receded into a low-intensity rebellion since its territorial defeat in March 2019, and its senior members continue to be hunted down, it is possible the US president may be wary about once more withdrawing troops from the unstable borderlands and areas previously under the group’s sway, this time in Syria, lest he risk the political damage at home that would follow if the organisation were to re-emerge.

Although ISIL’s ability to operate has been diminished, it has not been defanged, with its cells continuing to carry out ambushes and assassinations throughout swaths of east and central Syria. Furthermore, Moscow and Damascus are unlikely to shoulder the burden of operations against ISIL in its former areas in the east.

Both view the retaking of the last rebel-held bastion of Idlib in the northwest, on the other side of Syria, as the greater strategic priority.

Given this, and the SDF’s inability to sustain itself for long without US support, it is not hard to imagine a scenario post-US withdrawal in which ISIL could revive.

As the Senate Democrat aide said, such an outcome would mean, “an ISIL resurgence had occurred not once, but twice, as a direct result of policy decisions made, on not only the president’s watch, but also while the Democrats held office … That is not a legacy that President Biden wants for himself or for the party.”