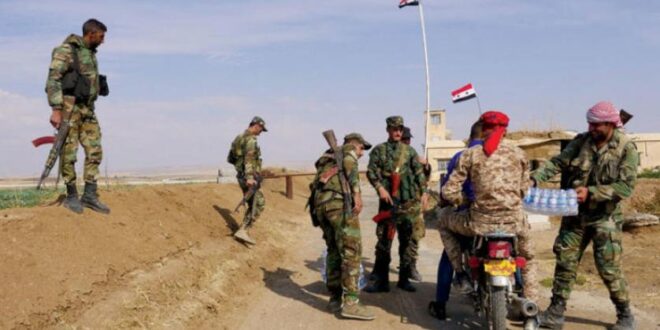 As a Turkish operation in Northern Syria against the SDF looms, the Syrian Army is getting closer to the Kurdish-led group, according to al-Watan.

Informed sources within the city of Ayn Issa revealed to al-Watan that the Syrian army has strengthened its presence near Ayn Issa and the outskirts of the city of Tell Abyad, in the northern countryside of the Raqqa governorate. The sources revealed that meetings had been held between representatives of the Syrian Arab Army and Syrian Democratic Forces (SDF) leaders, which have not yet yielded any significant results.

One source indicated that there has been a large Turkish mobilization and preparations to launch an offensive against the region. The source stressed that the Syrian Arab Army is determined to counter any “purported” aggression against the city, pointing out that the reality on the ground, as well as negotiations, look similar for the entire axis of Manbij, Ain Issa, and Tal Rifaat”.

The source, who expressed cautious optimism about the coming period, considered that this positive outlook depends on SDF’s actions and the decision it takes. This course of action seems to be still dependent on the U.S. agenda, instead of a national one.

At the same time, al-Watan’s field sources in Manbij, in the northeastern Aleppo countryside, revealed that the Syrian Arab Army has reinforced its positions strongly north of the city, from the al-Arima area along the Sajur River. The river is a natural barrier from Turkish forces and National Army militias and supports the military points east of the city along the M4 road, which connects Hassakeh to Aleppo through Raqqa.

The sources indicated that the large military reinforcements brought by the Syrian Arab Army to Manbij over the past three days — which includes soldiers, officers, tanks, and heavy artillery — indicate the Syrian Arab Army’s intention not to prevent the Turkish occupation army and its mercenaries from penetrating the de facto borders on the ground. That is, this area is a red line that should not be crossed.

The sources confirmed that Russia is sending strong messages to the Turkish regime, through its military exercises, that the current de facto borders should not be crossed, either east and west of the Euphrates. This Russian approach applies especially in areas that Russia considers important. This has recently urged the step to strengthen its military presence there, as in northeastern Syria, given that it has become A major player east of the Euphrates.