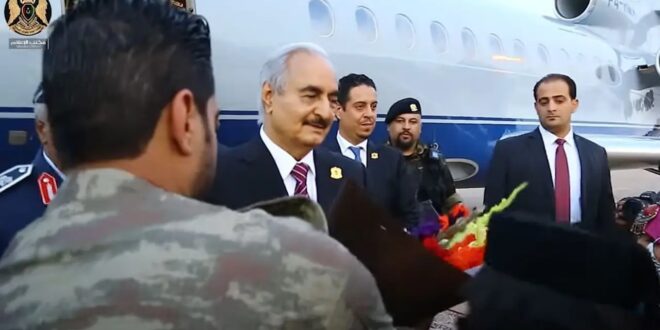 With Libyan presidential elections set for late December, Saddam Haftar touched down in Tel Aviv last week for a secret meeting. Could Israeli normalization with Libya be on the horizon?

Last Monday, a private jet – a French-manufactured Dassault Falcon, registration P4-RMA – took off from Dubai and landed at Ben-Gurion Airport. The plane was on the ground for about 90 minutes, and then continued on to its final destination in Libya. The jet belongs to the Libyan warlord Gen. Khalifa Haftar and is used to fly his family and aides.

On board the plane was the general’s son, Saddam Haftar. Father and son are seeking military and diplomatic assistance from Israel, and in exchange promise that if they head the national unity and reconciliation government to be established in Libya after the presidential elections on December 24, they will launch diplomatic ties with Jerusalem.

Saddam Haftar is also being assisted by PR companies and strategic advisers from France and the United Arab Emirates. According to unconfirmed reports, employees representing the Haftar family are working in a firm registered in the UAE, including some Israelis.

Gen. Khalifa Haftar is considered the strongest and most influential man in Libya. Until recently, he headed the rebel government, headquartered in Benghazi in the eastern part of the country, with the country’s largest and most important military force.

Saddam Haftar is considered his father’s right-hand man, with the 77-year-old general’s health fragile. Three years ago, Gen. Haftar was rushed to a military hospital in Paris with a life-threatening condition. He made Saddam an officer and appointed him as a brigade commander in his army, granting him growing authority ever since.

It is unclear whom Saddam Haftar met during his short stay at Ben-Gurion Airport. In the past, though, it was reported that Haftar Sr. had held secret contacts with Israel, especially through the Mossad’s Tevel department, whose representatives met with him on a number of occasions.

Tevel is responsible for maintaining clandestine relations with Israel’s intelligence counterparts overseas, non-state organizations and governments that do not have official diplomatic relations with Israel. To date, it has established contact with nearly 200 entities.

Representatives of the Israeli National Security Council have maintained contacts with representatives of Libya for a number of years. These began under the council’s then-head, Meir Ben-Shabbat, who appointed a former Shin Bet operative, known only as R., to maintain ties with Arab countries. The real name of R., also code-named “Maoz,” is not allowed to be published under the Shin Bet Security Service Law. R., who frequently clashed with then-Mossad chief Yossi Cohen over the division of powers, retired last January.

After Prime Minister Naftali Bennett appointed Dr. Eyal Hulata as head of the National Security Council, the Libyan “file” has been handled by Nimrod Gez, also a former senior Shin Bet official who commanded the Gaza unit in the organization’s southern district. Gez serves in the National Security Council as head of the branch covering the Middle East, Africa and diplomatic ties there.

The reason for Saddam Haftar’s visit last week was connected to next month’s Libyan elections. The purpose of the elections is also to establish a reconciliation government that will bring together warring groups and tribes who are involved in the civil war that has been going on for about a decade, since the fall of Col. Muammar Gadhafi’s regime.

Khalifa Haftar was among a group of young officers, headed by Gadhafi, who in September 1969 brought down the regime of King Idris and made Libya a republic. During the Yom Kippur War in 1973, Haftar headed a small expeditionary force that aided the Egyptians in the war against Israel.

Gadhafi later granted Haftar the rank of colonel and in 1987 sent him to command the Libyan expeditionary force seeking to conquer parts of neighboring Chad. The military campaign, during which it was claimed the Libyan army used mustard gas against Chadian soldiers, utterly failed and Haftar was taken prisoner.

During his imprisonment, and after Gadhafi disavowed him, Haftar and a few hundred of his soldiers – backed by the CIA – rebelled against Gadhafi and did not return to Libya. Haftar and his troops found asylum in the United States and from there, with CIA support and financial aid, a few unsuccessful attempts were made to overthrow Gadhafi.

Haftar and his family were given U.S. citizenship and lived in Virginia, not far from CIA headquarters at Langley. After the uprising in 2011, which ended with the death of Gadhafi, Haftar returned to Libya and made failed efforts to lead the country. A civil war has been underway ever since, with various interludes. Armed militias have been founded, including jihadist groups fighting each other and trafficking in humans, drugs and commodities.

The civil war went international after it drew in global and regional powers. Two rival governments operate in Libya. One is in Tripoli, and is recognized by the United Nations, the European Union and today, under President Joe Biden, by the United States. Turkey, which sees itself as a regional and Mediterranean power, established a large base in Libya with drone squadrons that attack Haftar’s army.

The other government, headed by Haftar, is in Benghazi and Tobruk, is supported by a strange coalition of Egypt, Jordan, the UAE, Russia, and secretly, also by France.

Intelligence agents of all these countries operate secretly in Libya and assist the efforts of the Haftar family to take over the entire country. The UAE funds arms deliveries including drones, which are essential to Haftar’s army. Egypt, which shares a long border with Libya and fears jihadists will cross into its territory, also supplies Haftar with weapons, as does Jordan, which even attempted to check the possibility of selling aircraft, but was warned against it by the United States.

Haftar is also assisted by Russian mercenaries, members of the militia known as the “Wagner Group.” This is in theory a private security firm, but in fact it’s an auxiliary to Russian intelligence and the Russian army, which operates on the orders of President Vladimir Putin. The Wagner Group also receives orders from the Kremlin in Syria and various African countries.

Israel has always had an interest in Libya because of its geostrategic location in the Mediterranean and its proximity to the Egyptian border, and also because of the large community of Libyan Jews in Israel and their influence on Libyan Jews who emigrated to Italy.

After Gadhafi’s rise to power, Israel became more interested in Libya because of his support for Palestinian terror groups, to whom he gave money, arms and training. Gadhafi’s attempts to secure chemical, biological and nuclear weapons also attracted the attention of Israeli intelligence, which placed Mossad agents in the country, landed commando forces like the Flotilla 13 and Sayeret Matkal elite units, and used technological measures of military intelligence.

Simultaneously, Israeli representatives also conducted contacts of a diplomatic and humanitarian nature with Gadhafi’s regime. These contacts were managed by one of Gadhafi’s sons, Saif al-Islam, through Jewish businessmen of Libyan origin. One of these is Walter Arbib, whose operations are centered around Canada.

As Haaretz reported a decade ago, Arbib was the main intermediary who assisted in the 2010 release of the Israeli photographer and artist of Tunisian origin Rafael Haddad, who was arrested in Libya on suspicion of espionage.

At the same time that year, at the request of the Israeli Foreign Ministry, Arbib persuaded Gadhafi’s son to drop his intention of sending a ship with humanitarian aid to Gaza. In exchange, it was agreed that the ship would dock at El-Arish, Sinai, and its cargo would be sent to Gaza through the Rafah crossing.

As part of the deal, Libya built dozens of prefabricated buildings in Gaza and Israel released a number of Palestinian prisoners.

After his father’s fall, Saif al-Islam, who was tried and imprisoned, tried to enlist advocates and lobbyists – including some of those same Jewish Libyan businessmen.

His sister, Aisha, went even further in a bizarre-sounding proposal: After fleeing to Algeria, she asked associates close to her in Europe who had previously done business with her and her family to explore the possibility of obtaining asylum in Israel. She even hired an Israeli lawyer from Jerusalem who tried to check whether she could come to live in Israel under the Law of Return, due to rumors common over many years that Muammar Gadhafi’s mother was in fact Jewish and had converted to Islam.

In recent years, Aisha has been living with her children in Oman, and complained to an Israeli acquaintance that she is frustrated because she lives in a “gilded cage.”

Following Gadhafi’s death, Libya’s arms stores were plundered and a great deal of equipment found its way overland through Egypt and Sinai to Hamas in Gaza and by sea to Hezbollah in Lebanon. To plug these holes, and with the encouragement of Egyptian intelligence, the Mossad and Shin Bet held talks with Gen. Haftar to stop the shipments. According to various reports, Israel during that era sided with the general. But at a certain point, and so as not to put all its eggs in one basket, the Mossad decided to make contact with both Libyan governments. It can be assumed that these ties continue to this day.

In recent weeks and as part of preparations for the elections, Prime Minister Abdul Hamid Mohammed Dbeibah (in the Tripoli government) has been in contact with Gen. Haftar and his son Saddam. With the encouragement of UAE intelligence, they are trying to form a national unity and reconciliation government. The U.S. and the EU are also seeking this, and Israel also supports the idea, which could help it move ahead the goal of diplomatic ties with Libya.

Gen. Haftar would want to lead the new government. But he knows that his chances of doing so are slim, as are those of Saif al-Islam, who was released from prison in 2017 and is also toying with the idea. The latter is reportedly doing so because he is wanted for war crimes by the International Criminal Court in The Hague. Meanwhile, civil lawsuits have been filed in U.S. federal courts against Gen. Haftar for war crimes, human rights abuses and torture.

In contrast, the chances of Saddam Haftar are better than those of his father, despite the fact that he, like many Libyan leaders, is tainted with corruption and leads an ostentatious lifestyle. At his wedding a year ago, he gave out gifts to his guests to the tune of $10 million. The guests reportedly included 40 poets who sang his praises and those of his tribe.

If Saddam Haftar plays a key role in the unity government (if any such government is indeed established), the chances will increase that Libya will launch diplomatic ties with Israel, with the encouragement of Egypt, the UAE and the Biden administration.

The Prime Minister’s Office, which is in charge of the Mossad, Shin Bet and National Security Council, refused to comment for this story.