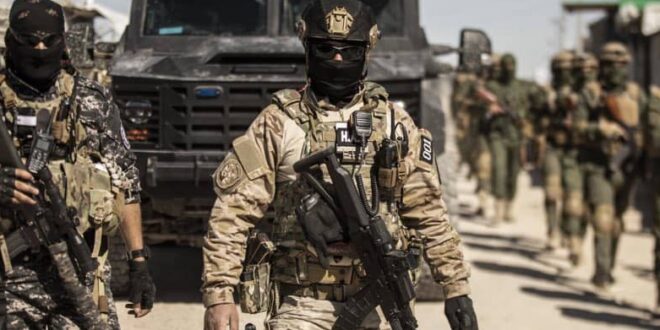 SDF members destroyed a vehicle-borne improvised explosive device “to prevent possible harm to locals in the area and recovered weapons cache and detained maligned actors to eliminate the threat.”

The General Command of the Internal Security Forces (Asayish) in northeast Syria announced on Monday the arrest of a suspected ISIS cell that was planning to launch an attack on a terrorist detention facility in the Syrian city of Hasakah.

Special teams of the counter-terrorism forces (HAT) in the Hasakah province located the cell in the Deir al-Zor countryside with support from the US-led coalition, the Asayish said in a statement. The operation took place close to the Abu Khashab area, about 90 kilometers from Hasakah city.

Clashes erupted between the HAT forces and ISIS militants, the Asayish added, noting that one suspect was killed, one was wounded, and four others were captured.

The official account of the US Special Operations Joint Task Force–Levant (SOJTF LEVANT), which oversees activities in Syria, Iraq, Jordan, Lebanon, and Egypt, tweeted that SDF members discovered vehicle-borne explosives and a weapons cache during an operation in Deir al-Zor.

“They destroyed the VBIED (vehicle-borne improvised explosive device) to prevent possible harm to locals in the area and recovered weapons cache and detained maligned actors to eliminate the threat.”

The SOJTF LEVANT said that ISIS is trying to harm the region “by gathering resources and personnel. SDF is partnered with Coalition and remain dedicated in the fight against Daesh (ISIS) to prevent such actions.”

There have been several attempted prison breaks in the last two years from inside ISIS detention facilities in Hasakah. But so far, no prisoners have escaped.

According to the Military Monitoring Office of the SDF, SDF special units and the coalition on Oct. 30 also arrested an ISIS cell leader in the Ghweiran neighborhood of Hasakah, Northpress reported. The neighborhood has a detention facility where ISIS detainees attempted a major jailbreak on March 29, 2020.

The British government earlier invested 20 million dollars in bolstering security at the prisons.

However, the report said while the coalition continued to provide materiel and support to the SDF to improve the conditions in the facilities, detainees continued to live in substandard and overcrowded living conditions.

“CJTF-OIR (US-led coalition) said the poor living conditions increased the chance of breakouts. There was one escape attempt by detainees during the quarter.”