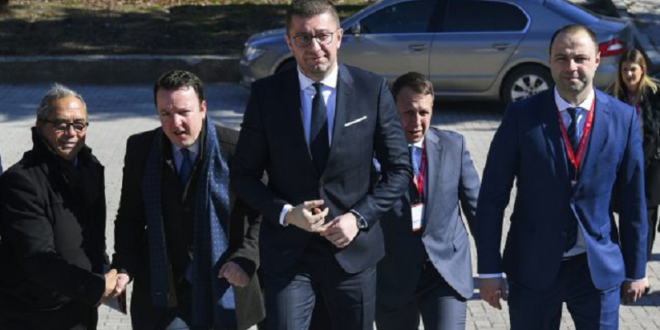 A badly thought-out bid to topple Zoran Zaev’s administration has left the embattled PM stronger than he was before – though the benefits for him may be short-lived.

Amember of parliament gone missing, deputies with COVID in full protective suits stuck for hours in glass cubicles, no quorum for a plenary session to resume, numerous press conferences by the opposition – threats, appeals and frustration.

That sums up the dramatic events on Thursday, when the opposition failed to bring down North Macedonia’s government with a no-confidence vote.

While many outside the country are still grappling to understand why Zoran Zaev had to resign after his Social Democratic Party suffered a defeat in local elections ten days ago, events in the country have since developed at warp speed.

Only few days after Zaev announced his resignation, main opposition VMRO DPMNE leader Hristijan Mickoski posted a photo on Facebook of himself with the leaders of three ethnic Albanian parties (one of them part of Zaev’s ruling coalition) and one minor leftist party, claiming they now had a majority in parliament.

This plot twist overshadowed the troubles within the ruling Social Democrats, where they were struggling to come up with viable replacement for the outgoing PM and party leader, Zaev, and keep the party afloat after its setback in the municipal elections.

The opposition upped the stakes by giving Zaev an ultimatum to submit his resignation by November 8, or they would file a motion for a no-confidence vote. He did not, so they acted.

In the days leading up to the session, the opposition built up an atmosphere of triumph, with talk of how they would soon end “the criminal regime of Zaev,” but not much about what would happen if his government was ousted. Maybe new elections, maybe a new majority government.

At their end, the Social Democrats stayed relatively quiet, bar the odd press release attacking their opponents’ stance on the EU, NATO or the agreement they brokered with Greece that halted a 27-year-long dispute over the name of the country.

Unsurprisingly, tensions spilled over on social networks, with ugly exchanges and threats of revenge between supporters of both sides.

The start of the day the opposition had dubbed D-day showed that their move was ill-calculated.

One MP, Kastriot Rexhepi, who had signed the motion calling for a vote on the government, was nowhere to be found. After frantic calls and visits by party colleagues to his home proved fruitless, he was declared kidnapped.

Rexhepi then posted on Facebook that he had changed his mind and would not attend the session.

The rest of the day passed amid allegations that the missing MP was being kept away against his own will, and his party leader even reported his absence to the police.

Rexhepi then again resurfaced with a video on Facebook saying he was fine but had to stay away due to numerous threats. His colleagues still insisted he had been kidnapped and blamed it on the ruling coalition. No Rexhepi meant no quorum and no vote.

About two hours before midnight, VMRO-DPMNE representatives held a brief presser condemning the day’s events and calling for swift new elections. Then they left the chamber.

The speaker and the government ministers then returned to parliament 20 minutes before midnight and the speaker closed the session and formally put an end to the failed no-confidence motion.

So, what did we learn from this?

First, that Mickoski went “all in” – and lost. His failed gamble also turned into an ace for Zaev. Just a week ago he looked done, and many argued, so was his party, in the long run. By upping the ante, Mickoski not only provided Zaev with a solid alibi to stay on and ensure that the country stays the course, but also boosted his drive to increase his narrow majority.

Currently, the tally shows a tie, with 60 against 60 MPs in the 120- seat parliament, that is, presuming Rexhepi has joined the government ranks.

The expectation now is that the minor ethnic Albanian party Alternative will join the government coalition and so increase its majority to 64, or perhaps 65.

But a more stable majority does not mean that Zaev will stay on. Perhaps not immediately, he is still expected to pass the baton to a party confidante for both the post of PM and party leader.

The Social Democrats and their partners won a Pyrrhic victory. We still do not know whether Rexhepi going missing was due to cowardice or real threats, but the optics of an MP not able to show up and explain his decision has cast a dark shadow, and fed all sorts of conspiracy theories.

At the same time, although games with quorums and filibustering are a regular thing in many parliaments, many wonder whether the whole thing had to be executed in such a manner. Once it was clear that the opposition had no majority, why not allow the debate and vote to take place?

Or does the inability to do so mean that ruling majority could not afford the risk of someone else deciding to switch sides, as their coalition partner, BESA, did, just a few days ago?

This is not the first time people have witnessed MPs changing camps, it has been done many times in the past, and in such an ugly fashion that it has cemented the public perception that corruption, bargains and trades motivate parliamentarians far more than principles or public interest. To that effect, Thursday’s episode only left a bitter taste and further polarised society.

The opposition will now re-group and consider how to create conditions forcing new elections to be called.

They may organise protests or walk out from parliament, further complicating matters for the government. In the short run, they have bought Zaev time, but the odds are it will not be too long before North Macedonia heads to the polls again.

When he announced his resignation, Zaev insisted that the Social Democrats has to stay in charge of the country as there would soon be a window to resolve the dispute with Bulgaria, which has vetoed the country’s bid to open EU accession talks.

Bulgarians go to the polls this weekend, raising hopes in Skopje that after Sunday Sofia may be willing to lift its blockade, and North Macedonia can launch accession talks in December.

But even if this miracle were to happen, the political benefits will be short lived and won’t make up for all the shortcomings of the Social Democrats’ rule in the past period. Either way, the government is unlikely to stay in place for a full term.