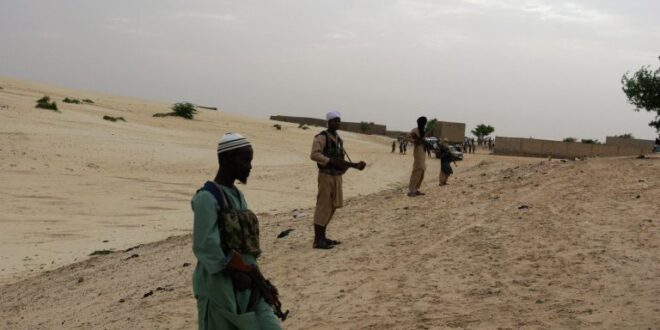 The trial of former Ansar al-Din member, Ahmed al-Faqi, was the most prominent case of a militant tried for war crimes stemming from the 2012-2013 conflict in Mali, but such trials have not continued since 2017.

Ansar al-Din’s successor coalition group, Group for Supporters of Islam and Muslims (JNIM), and its rival, Islamic State in Greater Sahara (ISGS), have engaged in hostage-takings, massacres, and other atrocities.

If the northern Mali conflict is to come to an end, some form of restorative justice or conflict resolution mechanism will need to be introduced.

One of the paradoxes of the al-Faqi trial is that al-Faqi destroyed sacred Sufi shrines, while no one who harmed civilians during the 2012-2013 timeframehas been tried for those crimes.

In 2012-2013, Ansar al-Din (Supporters of Religion) was one of the militant groups to occupy northern Mali until a French-led regional military intervention retook the region from Ansar al-Din and allied jihadist groups. These allied groups included al-Qaeda in the Islamic Maghreb (AQIM) and another local Songhay- and Malian Arab-centric ally, Movement for Unity and Jihad in West Africa (MUJWA). AQIM, and especially its offshoots such as MUJWA led by Mokhtar Belmokhtar, specialized in attacks on Western interests, including conducting suicide bombings at internationally-run mining facilities in Niger and Algeria. The comparatively less sophisticated MUJWA became best known for implementing harsh sharia punishments on civilians in Gao, Mali, who were often from marginalized social classes more so than “violators” of Islamic codes.

Despite AQIM and MUJWA’s attacks and sundry human rights violations, the most prominent jihadist in northern Mali to have faced war crimes charges is Ansar al-Din’s Ahmad al-Faqi. In a case tried by the International Criminal Court (ICC), he was fined over $3 million and sentenced to nine-years of imprisonment for the war crime of attacking protected objects under Article 8(2)(e)(iv) of the Rome Statute in 2017. Ansar al-Din’s leaders were mostly longstanding Tuareg separatist rebels familiar with Malian politics and international diplomacy and had only adopted the jihadist ideology in the years before the 2012-2013 conflict. Their newfound ideology emerged both out of conviction after being proselytized by the “puritanical” religious group, Tablighi Jamaat, among other Salafi preachers, and also to appeal to more extreme and experienced AQIM for support. Ansar al-Din was generally more lenient than MUJWA and intended to observe AQIM guidelines to avoid alienating civilians. However, al-Faqi and fellow co-fighters, who served on the “Islamic Court of Timbuktu,” destroyed at least ten Sufi mausoleums in northern Mali on grounds that they were used by Sufis for “idol worship.”

Since 2017, Ansar al-Din, along with AQIM’s Sahel-based brigades and other jihadist factions, merged into the al-Qaeda-loyal Group for Supporters of Africa and Muslims (JNIM). This group, like AQIM previously, has attempted to become somewhat more lenient than its rival, Islamic State in Greater Sahara (ISGS). The latter has frequently massacred civilians who allegedly collaborate with anti-ISGS militias, including killing 30 militia members in early November in Adadbad, Niger. ISGS has also tortured civilians who practice Islam in ways that ISGS considers “infidel” practices. While ISGS is undoubtedly more brutal than JNIM, there are still credible reports of JNIM itself committing egregious brutalities and wanton human rights violations. JNIM, for example, tends not to massacre civilians for simply supporting anti-JNIM militias, but it does regularly encounter, among others, ethnic Donso militias, and kills the militia members and steals their weapons, which it displays in videos released on social media platforms. Likewise, JNIM has destroyed critical infrastructure in Mali to prevent the militias’ movements and has kidnapped Western and local hostages, including French journalist Olivier Dubois, who was abducted in Mali earlier this year and has been featured in JNIM videos. He remains in captivity.

One of the paradoxes of al-Faqi’s case several years later is that he was tried for war crimes affecting sacred Sufi sites, but not for harming civilians. Meanwhile, his group, Ansar al-Din, which is now one component of JNIM, continues to carry out attacks and impedes the restoration of peace and stability in Mali, while its fighters have committed crimes against civilians and evaded capture. ISGS, meanwhile, has been committing even more severe crimes than JNIIM. Despite this, there have been only rudimentary justice processes put in place in Mali to try combatants or, in some cases, soldiers who have committed human rights violations. Should this conflict eventually come to a close, such preparations for justice, or perhaps a reconciliation commission, will need to be a top priority. One potential source of authority for such an initiative will be religious scholars, who have maintained some lines of communications with JNIM and ISGS, as well as with Mali’s political leadership, currently in turmoil after a second coup in the past year. But if Mali is unwilling or unable to domestically prosecute terrorists for their crimes, it should be done at a higher level, even by the International Criminal Court.