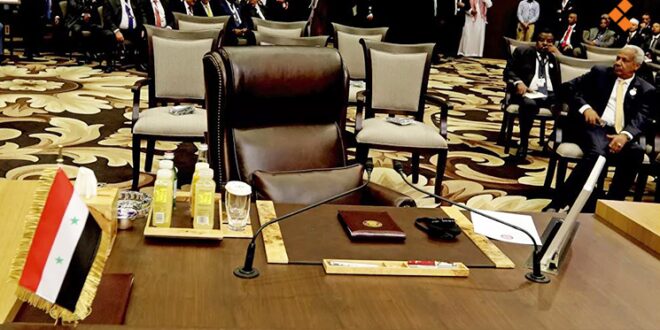 A senior source inside the General Secretariat of the Arab League said that Algeria’s discussions with Arab countries have resulted in a preliminary agreement to invite Syria to the group’s next summit. It was also agreed to restore Syria’s place in the Arab League at the upcoming meeting, which will be held in Algeria in March 2022.

The source explained that this step is the result of meetings held by Algeria with Arab countries, while noting that Qatar had objected.

The source indicated that Syria’s return to the Arab League could reflect the fact that the original decision to freeze Syria’s membership was “flawed and contrary to the Leagues’ charter,” according to al-Arabi al-Jadid (Qatari pan-Arab news website, editor’s note).

Egyptian diplomatic sources were quoted as saying that Cairo’s discussions with Damascus are ongoing, following the meeting between Egyptian Foreign Minister Sameh Shoukry and Syrian Foreign Minister Faisal al-Mekdad in New York at the end of September. This was the first meeting of its kind between the two countries in ten years.

The Egyptian sources stressed that the meeting’s aim is to move forward the main issue of mutual concern: Syria’s return to the Arab League.

The sources pointed out that Cairo has made progress on this subject in discussions with other Arab countries. In these discussions, Egypt has aimed to convince them both on behalf of Egypt and Russia, which has been asking Egypt for months to assist with Syria’s return to the Arab League.

Earlier this month, Algeria said that the time had come to end Syria’s suspension from the Arab League. Algeria has reiterated its rejection of the resolution from the outset and its support for everything that serves Arab reunification.

“It is time for Syria to return to the Arab League, without interfering in Syrian internal affairs. We have not even agreed to suspend Syria’s membership, and we do not believe that this step has contributed to improving the situation [in Syria],” said Foreign Minister Ramtane Lamamra on Wednesday, on the sidelines of a seminar for Algerian diplomats.

Post Views: 75
Previous Erdogan Continues Turkification, Opens Turkish-language School in Afrin
Next Has the Countdown Begun for Regime Return to East of Euphrates?