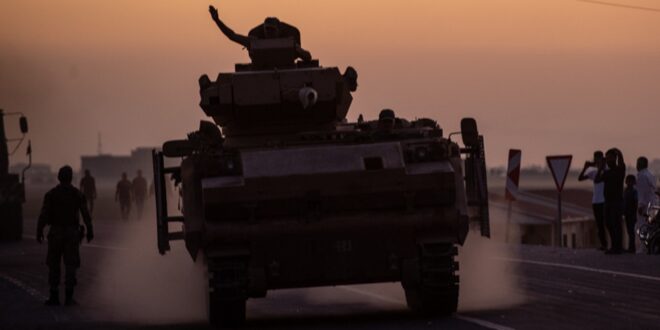 Has the Countdown Begun for Regime Return to East of Euphrates?

The regime will return to the areas under the control of the PYD, in a way similar to what happened in Daraa and under a decentralization formula, Fouad Alteiko writes in Nedaa Post.

The regime has never been far from the area under the control of the Democratic Union Party (PYD) since the beginning of the Syrian revolution, as a result of the understandings that took place between them at that time to hand over the area militarily to the PYD. The links and coordination between the two parties have not been interrupted so far in many areas, especially in the cities of Hassakeh and Qamishli, as well as in the regions of al-Shahba, Manbij, and some neighborhoods of Aleppo.

The PYD’s dialogue with the regime has never stopped, despite some accidental incidents between the two parties every now and then. These incidents were often dealt with amicably and sometimes with the help of the Russian intervention on the truce line.

But the problem was, and still is, the regime’s failure to respond to PYD’s demands in terms of recognizing the Autonomous-Administration that has existed since 2014. The regime has no willingness or perception other than to insist on the application of the local administration law 107 and the return of the entire region to the regime’s administration –as happened in the rest of Syria, most recently in Daraa.

This is the issue that PYD has been constantly rejecting. The regime considered this issue to be a repudiation of its previous agreements with PYD at the beginning of the Syrian revolution and increased its demands, strengthening its relations with America since 2015.

In present times, after the emergence of new factors in the Syrian scene, including Turkish threats to militarily invade some SDF-controlled areas, similar to what has happened in Afrin and Tal Abyad, Ras al-Ain / Serê Kaniye. This comes in addition to clear statements by the leader of the Kurdistan Workers Party (PKK), Jamil Bayek, to the Lebanese newspaper An-Nahar on 26 October 2021. He asserts the depth of the relationship with the Syrian regime since the 1980s and the need to resolve the outstanding problems between the regime and PYD. Russia supports him in this issue, especially after the recent meeting between SDC’s president, Ilham Ehmed, with the Russian leadership in Moscow, in which they asked her to conduct a dialogue with the regime. This development comes given the seriousness of the Turkish threats and the exploitation of this situation by the Russians in order to return the regime to the entire SDF-controlled areas.

In the absence of other options for PYD, and to avoid entering a war with Turkey amid clear American silence, it is interpreted as a sign of satisfaction in supporting this approach towards an understanding with the regime. Accordingly, we find the statements of the PYD leaders expressing their full readiness for dialogue with the regime without preconditions. The agreement does not only cover the military aspect, but also the administrative and the economic, that is, the return of the entire regime to the whole SDF-controlled region.

The regime has never considered these regions beyond its control and has always said that 90 percent of Syria’s areas are liberated, which means that it includes SDF-controlled areas.

SDF is in an unenviable position, either to confront Turkey or to enter into understandings with the regime, which is their preferred option so far, even if this leads to significant concessions to the regime and accepting the regime’s administrative return. This comes provided that they will be the implementers of Local Administration Law 107 instead of the Ba’athists, as employees of the regime and nothing more.

The Russians will deal with SDF militarily as they have dealt with the military factions in Daraa and others (the Fifth Corps model). In doing so, they will reap significant political gains at the regional and international level in terms of rehabilitating the regime and its control over most of the Syrian geography. Therefore, the Russian perception of resolving the Syrian crisis will become the best solution, whether in Astana or Geneva.

I don’t think America is absent from what is going on and what is happening behind the scenes and in public, because the American interest is focused from the beginning on fighting ISIS and reducing Iran’s role, and maintaining Israel’s security. If the Russians carry out these tasks they will be satisfied in handing over the entire Syrian issue to Russia and they silently withdraw from Syria.

It is noteworthy to mention that they have never included the East Euphrates, and SDF’s administration, or PYD at the basis of their strategic interest. They did not recognize the legitimacy of the existing administration as much as it required the need to maintain the security and stability of the region while they were present. The statements of former U.S. President, Trump, in 2019 were clear and direct when he said that they only use SDF as a functional body in exchange for generous financial support, and they did not commit to any agreement with them in order to protect them.