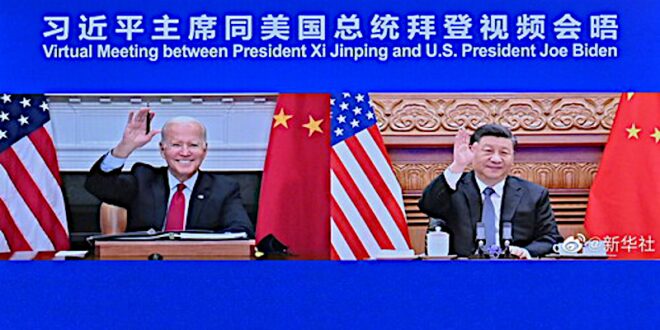 Perceptional analysis of this Virtual Meet TV Visuals clearly indicates that not only the body-language of Communist China’s President Xi Jinping but also his grim visage in responding to President Joe Biden’s opening pleasantries were one of imperial condescension.

In terms of substantive outcomes of defusing the ongoing escalating conflictual overtones of Communist China’s heightened belligerence over Taiwan, the foregone conclusion was that such a Virtual Meet of Communist China’s President Xi Jinping with US President Joe Biden would in the end up as a ‘Dialogue of the Deaf’.

Communist Chinese President Xi Jinping expectedly stuck to his imperial postures over all of Communist China’s so-called ‘Core Issues’ which place Beijing on collision trajectories with the United States.

Political dialogues at the highest Summit Levels presuppose that some homework and backroom consultations would obviously have been resorted to by both sides as an enabling factor for further Summit Dialogues by conceding some conciliatory overtures.

Analytically, the November 2021 Virtual Meet between American President Biden and Communist Chinese President Xi Jinping did not reflect even remotely any of the above highlighted ingredients.

Starkly staring in United States face was the inescapable reality that Communist China in November 2021 was in a strategically challenging mood and was militarily prepared to go to any lengths for military intervention against Taiwan to merge it with Communist China Mainland.

The above strategic reality was also a foregone conclusion even before this Virtual Meet, at least to me, and would have similarly struck many in the US strategic community and worldwide too.

Host of vexing questions arise therefore as to what impelled the Washington policy establishment to advise US President Joe Biden to make this political outreach to Communist China in November 2021. Major questions that plague strategically are (1) Was the impact on Indo Pacific Nations of a dead-end Virtual Meet in terms of its impact on US strategic credibility were taken into account? (2) Were there any indicators in Washington suggesting that Communist China might be inclined to adopt some conflict de-escalation over Taiwan? (3) Where does the United States go now after being imperiously rebuffed by Communist China?

The entire world today is aware that Communist China in 2021 in a Hitlerian military aggrandisement mood of achieving the ‘Great China Dream’ has prepared its over-sized military machine to not only evict the United States from the Western Pacific but also challenge the United States global predominance. Communist China does not seem to be relenting from this course going by available indicators from right across the global strategic calculus. It seems that Washington in 2021 in the absence of such indicators has “Gambled” on vain hopes that some reason and strategic sense would prevail over Communist Chinese President Xi Jinping?

The last question that needs addressing is that where does the United States go to after this imperial rebuff by Communist Chinese President Xi Jinping? There are no soft options like ‘China Appaesement’available to the United States in light of the current conflictual and conflict-escalation strategies of the United States.

The United States in order to maintain its global predominance as the nett provider of global security and stability cannot be seen at this cortical juncture in 21st Century to be wavering in its intent and capacity for a military showdown with Communist China, if the need so arises. Taiwan seems to be emerging as the starting point.

Need it be said that the United States has critical economic levers of power to bring Communist China to its knees even before it intends to inflict a ‘Hot War’ on America and its Allies and Strategic Partners. This is despite recent reports that Communist China has outstripped United States as the richest nation in the world. Presumably, the richness of Communist China has not been co-related to its burgeoning expenditures on its vast military machine and also Beijing’s mounting expenses on internal security from Occupied Xingjian and Occupied Tibet to Hong Kong.

Concluding, it needs to be emphasised, to the limits of over-emphasis, that in the ensuing 2020s the US Presidents must shun the Henry Kissinger ill-advised Nixonian precepts of ‘China Appeasement’ hoping that it could offset Russia. Russia today is in an uncertain strategic nexus with Communist China and is having its own strains with Beijing.

Historically and contemporaneously taking into account global perspectives, the United States must be perceived as having overall the “Intent”, “Political Will” and the “Capacity” to confront Communist China’s belligerence wherein the “China Threat” seismic tremors have extended to NATO and the European Union’s Major Nations also.