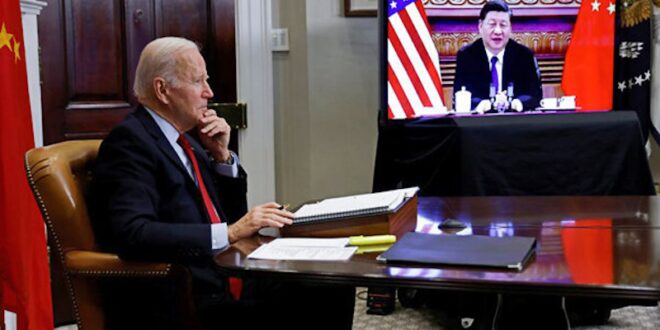 What Xi And Biden Forgot To Mention On The Economy – Analysis

According to the official readout, in their virtual summit this week, US President Joe Biden and Chinese President Xi Jinping discussed ‘managing competition responsibly’. For Biden, the talks were a chance to press Xi on China’s actions in Hong Kong and its assertive posture in the Taiwan Strait, as well as human rights abuses in Xinjiang. Xi, for his part, warned Biden against leading the United States into a new Cold War against China.

Missing on the agenda was any serious discussion about the problems facing the global economy as it recovers from the deep recession of 2020.

Aside from some worthy breakthroughs, like the agreement to hold bilateral ‘stability’ talks on nuclear issues, it’s not clear what Xi’s and Biden’s responsibly managed competition will look like. If it looks anything like the managed trade that now governs the economic interactions of world’s two largest economies, then ‘competition’ is a wild misnomer. The trade war between the two countries, and the ensuing ‘Phase One’ trade deal, represent the worst kind of anti-competitive policy kludge, designed to protect politically favoured industries in the United States and kicking out Australian and Canadian farmers and gas suppliers who can produce more efficiently than their American counterparts. In economics as in sport, competition is best managed by neutral umpires, not by the participants themselves.

The failure of the two presidents to discuss what they could do to shore up the economic recovery is a big, missed opportunity. There is a desperate need for bolder leadership that tackles the short-term pressures and – just as importantly – the longer-term structural fault lines. The global economy was looking decidedly sickly even before COVID-19 struck. The Brexit referendum in June 2016, and the election of a populist protectionist to the White House later that year, marked the start of an inward turn in the advanced economies. The yield curve for US Treasuries inverted in May 2019, usually a reasonably reliable harbinger of recession. The structural damage to the world economy inflicted by Britain’s exit from the European Union and the tariffs put in place under President Trump has been masked by the much greater immediate destruction wrought by the pandemic, but as the recovery gains pace, it will become increasingly difficult to ignore.

Though the Biden administration has more or less made peace, though on the wrong terms, with Europe — lifting the Trump-era tariffs but imposing quotas on steel and aluminium exports from the bloc —it has stuck with Trump’s belligerent posture towards China. It has maintained tariffs on a broad swathe of Chinese imports and continues to hold back exports of semiconductors in the name of national security – even though the likely long-run effect will just be to stimulate semiconductor manufacturing elsewhere.

The effect of both of these policies is to restrict the supply of consumer goods in the United States. That isn’t the only reason for the US experiencing the highest inflation rate since George Bush Sr was president. Compared to the ‘Great Resignation’ of workers not wanting to return to low-paying jobs and the logistical issues at American ports, though, it is a problem that is easily fixed – at least in theory. The domestic politics of removing the Trump tariffs might be tricky, but Biden could use his power to issue broad exemptions that would render the tariffs a dead letter. Biden will also remember the political fate of the last two one-term Presidents, both of whom presided over economic contractions that stemmed in part from tighter monetary policy in the face of inflationary pressures.

Inflationary pressures, in the United States and elsewhere in the global economy, may be only temporary, and for the most part central bankers are choosing not to overreact by precipitously raising rates and choking off the economic recovery. But the task is made harder by senseless trade restrictions that have not yielded any tangible security or economic benefits to the countries imposing them. Ever since the dismantling of the Corn Laws, economists have known that removing barriers to international trade lowers prices; politicians, though, captured by special interests, often have to be dragged screaming and kicking to recognising it.

Though he touched on it only lightly in the summit, President Xi and his advisers would be well aware of the possible impact on the Chinese economy of policy tightening in the United States and other advanced economies: among other things, a depreciation of the yuan, which would make it harder for Chinese borrowers, like troubled real estate giant Evergrande, to service dollar-denominated debts. Had Trump won last year’s election, he might have gloated at the thought of a hard landing for the Chinese economy: Biden’s team is smart enough to know that a recession in China would knock the wind out of the global economy, too.

The failure of the two presidents to come up with a strategy to drag the world out of the economic doldrums during their summit may be hardly surprising, given the political constraints, but it is a major missed opportunity. Australia, and the world more generally, is best served by managed political and economic cooperation between Chinese and American leaders and intense trade competition between their businesses.

Instead, the small victories of the summit notwithstanding, we seem to be in line for more political competition and trade collusion. The hard heads in Asian capitals should not be fooled by policy illywhackers purveying managed trade solutions in Washington or Beijing.