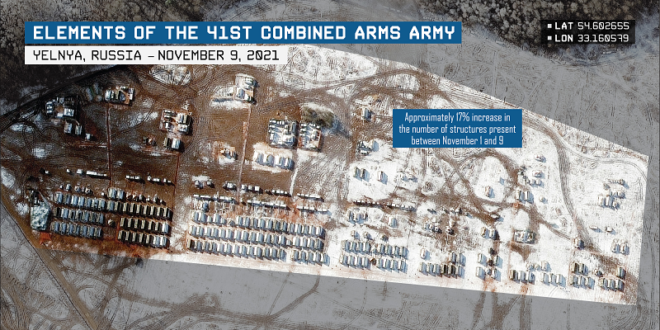 Russia is continuing a slow but steady military buildup near its border with Ukraine. As new CSIS satellite imagery analysis shows, there has recently been a 17 percent increase in the number of military structures used for storage and billeting troops outside the Russian town of Yelnya, home of the 144th Guards Motorized Rifle Division (see Figure 1). CSIS analysis also shows a continuing surge of military equipment and personnel from the 41st Combined Arms Army, which is normally garrisoned over 2,000 miles away in Novosibirsk.

Russia’s buildup comes on the heels of a spike in hostilities between Ukraine and Russian-backed rebels. Following a recent Ukrainian strike against rebels using a Turkish-made Bayraktar TB2 armed drone, for example, Russia scrambled fighter jets and deployed additional tanks to the Ukrainian border. Unlike the Russian troop buildup in the spring of 2021, however, the current Russian military buildup is not tied to a military exercise and is therefore causing concern in Washington and some European capitals.

NATO secretary-general Jens Stoltenberg urged Russia on November 15 against taking any “aggressive actions” in Ukraine. “We see an unusual concentration of troops, and we know that Russia has been willing to use these types of military capabilities before to conduct aggressive actions against Ukraine,” he said. In a sign of how seriously the United States is taking the threat, President Joseph Biden also dispatched CIA director Bill Burns to Moscow to warn the Kremlin that Washington is carefully watching its actions near the Ukrainian border.

Despite Moscow’s military flexing, it is unclear whether Russia is preparing for a conventional blitzkrieg operation into eastern Ukraine in the near future. Russia’s main actions in Ukraine to date have largely involved irregular warfare—such as clandestine support to rebels, offensive cyber operations, and a heavy emphasis on special operations and intelligence units—not conventional warfare. Russia’s 2014 annexation of Crimea was a textbook demonstration of what the Chinese general and military strategist Sun Tzu called the acme of skill: “to subdue the enemy without fighting.” Moscow relied on special operations forces, not conventional units, to annex Crimea.

Later that year, Russian intelligence and special operations forces stoked a wave of popular unrest—and then war—in the Donbas region of eastern Ukraine. Six different spetsnaz brigades were involved in the Ukrainian operation in its early stages. Russian special operations forces—or “little green men,” as they were subsequently called due to their unmarked green army uniforms—provided training, weapons, money, and other assistance to rebels.

Russian subversion in Ukraine has continued to this day. Moscow has been systematically fomenting political unrest in Donbas by increasing arms shipments to Russian-backed rebels in the region, according to a recent study funded by the European Union and the German Federal Foreign Office. Such efforts have led to an increase in fighting between Ukrainian forces and Russian-backed separatists, part of the protracted “frozen conflict” that has persisted for over seven years. In addition, Russian president Vladimir Putin has long stated that he views Ukraine as inseparable from Russia.

Moscow’s current actions near the border are likely motivated by at least two factors.

First, Russian officials are angry at the deepening U.S. and Western strategic partnership with Ukraine. On November 10, for example, U.S. secretary of state Antony Blinken and Ukrainian foreign minister Dmytro Kuleba announced in Washington a U.S.-Ukraine Charter on Strategic Partnership. They promised to continue to deepen bilateral cooperation in the political, security, defense, economic, energy, and other spheres. The charter also reaffirmed the U.S. commitment to Ukraine’s sovereignty and territorial integrity, including Crimea, “in the face of ongoing Russian aggression.” As part of the security and defense cooperation, the United States has already sold weapons, such as Javelin anti-tank missiles and launchers, to Ukraine.

In addition, Turkey has provided combat unmanned aerial vehicles (UAVs), such as the Bayraktar TB2, to Ukraine, which are being used against Russian-backed rebels. NATO has also increased its presence and conducted maritime exercises in the Black Sea with the Ukrainian military.

Second, Russian leaders likely assess that there is little political will in Europe or the United States to aid Ukraine in a war, especially in the context of other foreign and domestic crises. French leaders are still upset at the United States and United Kingdom for their decision to sell nuclear-powered submarines to Australia, terminating a $90 billion French-Australian submarine deal. In addition, Belarus’s autocratic leader, Alexander Lukashenko, has encouraged thousands of migrants to mass on the European Union’s eastern flank—including the borders with Poland, Lithuania, and Latvia—creating a growing political and humanitarian crisis.

The Nord Stream 2 (NS2) gas pipeline connecting Russia to Germany is near completion, creating a major energy vulnerability as Russia gains economic and political leverage over Germany. Finally, the United States’ withdrawal from Afghanistan has raised questions in Moscow—and even Ukraine—about the United States’ willingness to aid Ukraine in a war with Russia.

These issues suggest that Moscow will continue to use Ukraine as a bargaining chip. Since 2014, Russia has used the frozen conflict in Ukraine to its advantage, dialing up—or down—the intensity of war depending on political calculations. Additionally, Moscow has routinely massed military units near the Ukrainian border to conduct a psychological operations campaign by maintaining tension in the region, exerting political pressure on Ukraine, and sending a message to the United States and the European Union to stop interfering in a region Moscow considers within its sphere of influence.

While it is unclear whether Russia will send conventional forces into Ukraine in the near term, the United States and its European allies and partners need to take Moscow’s actions seriously. Russian military forces—including elements of the 41st Combined Field Army and 144th Guards Motorized Rifle Division (see Figure 4)—would likely outmatch Ukrainian conventional forces and overrun Kiev in a matter of hours if they invaded. Additionally, the United States and other European states are unlikely to engage Russia directly over Ukraine.

This reality means that Washington’s goal should be to deter Russian conventional operations in Ukraine by punishment—not denial. Deterrence by denial would be difficult—if not impossible—since NATO does not have sufficient personnel or capabilities currently deployed to Ukraine. European countries also continue to lack sufficient high-end military capabilities for a war with Russia, according to a recent CSIS report. Additionally, Ukraine’s status as a non-NATO member means that the alliance’s collective defense provision would not apply if it was invaded. In short, NATO forces could not prevent a quick and decisive fait accompli by Russian conventional forces.

But deterrence by punishment is feasible if led by the United States. The United States and its European allies and partners should publicly and privately communicate to Moscow that a conventional attack on Ukraine would initiate crippling sanctions from Western countries, deepen Russia’s political isolation from the West, and potentially trigger a Western-backed insurgency against Russian forces in Ukraine. The United States would have to take the lead. The populations of several European countries, such as Germany and Austria, have noted that they would prefer to remain neutral in a war with Russia, according to an opinion poll by the European Council on Foreign Relations.

Mohammad Yousaf, who headed the Afghan war for Pakistan’s Directorate for Inter-Services Intelligence, said it best when referring to the Soviet invasion of Afghanistan in the 1980s: “Death by a thousand cuts—this is the time-honoured tactic of the guerrilla army against a large conventional force. In Afghanistan it was the only way to bring the Soviet bear to its knees.” Russia could see history repeat itself and suffer a similar fate if its conventional forces invaded Ukraine.