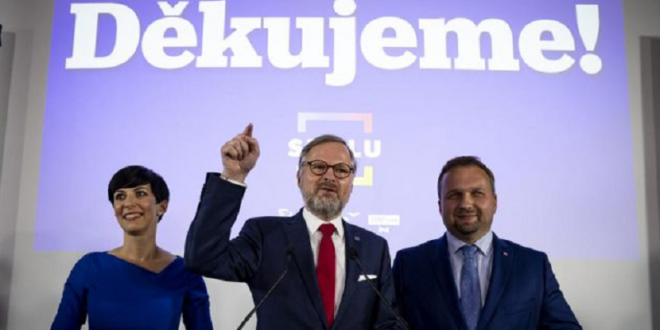 After making a miraculous recovery and now back in Prague Castle, President Zeman looks set to try to exploit the deep divisions that exist between the broad coalition.

Converting a Czech election result into a new government has often taken an age, the fractured political landscape making coalition building a complicated process. The five-party “Democratic Bloc” electoral coalition has no such worries; even so, seven weeks after winning 108 of parliament’s 200 seats, it’s still waiting to take the reins.

The reason for that is President Milos Zeman. Following the delay caused by his ill health, President Zeman has promised to appoint Petr Fiala, head of the conservative Civic Democratic Party (ODS), as prime minister when he returns to his desk on November 26. But with Fiala and his cohorts chomping at the bit to start dealing with a mounting pile of issues, Zeman has sensed an opportunity to test his leverage over the new administration – something for which he has become notorious over the past eight years.

The president is still to appoint the other 17 ministerial nominees. That’s meant to be a formality, but Zeman is a master of turning such formalities into political drama.

The president has told the country that he plans to object to one ministerial nomination. While he didn’t name anybody, the proposal of Jan Lipavsky as foreign minister is widely assumed to be the target.

The Pirate Party MP is a staunch critic of the links to Russia and China that Zeman has worked so hard to cultivate. But at the same time, the head of state, who has no official power to demand any changes in the composition of the government, wants to see how far he can push Fiala.

“Zeman prepared the ground and decided to go into dispute. He is testing the position of the future prime minister,” political journalist Marie Bastlova told Czech Radio.

Fiala has pledged not to change any name on the list. And Democratic Bloc MPs have called for pushing back against the incorrigible president, in the guise of cutting the budget of the presidential office or even a constitutional complaint against Zeman’s violations.

For the moment, Fiala has remained calm. But he’s well aware that Zeman and his circle have spent years stretching the spirit of the constitution to cause mischief and raise Prague Castle’s sway over the nation’s political life.

Blocking ministerial appointments is a favoured ploy. The president twice sparked chaos during the term of the outgoing minority government led by Andrej Babis by refusing to appoint nominated ministers.

These episodes illustrated Zeman’s leverage over the billionaire and his weak government. But with the 2017 power pact with Babis now of little use, the presidential administration needs to find a way to get its hooks into the new government.

Splitting the five parties is an obvious potential route, and so Fiala has been urged to stand his ground in support of the Pirate nominee, despite feeling the urgent need to take office.

“I don’t think we have 100 days to play with. I think that we have never been in such a difficult situation in the existence of an independent Czech Republic: COVID, energy prices, inflation. These are problems that we must address immediately,” Fiala tweeted earlier this month.

“It’s crucial for the government to take power as soon as possible,” Ziga Faktor, head of the Brussels office of the Europeum think tank, tells BIRN. “But it’s very likely that the president will create more difficulties.”

Like everyone else, Zeman and his team can clearly see the potential divisions inside the coalition, which pairs the conservative ODS with the centre-right Christian Democrats (KDU-CSL), Top 09 and Mayors & Independents (Stan), as well as the liberal-centrist Pirates. Following their successful cooperation to defeat Babis at the ballot box in October, the quintet must now seek new glue to hold their coalition together.

Top 09 leader and new parliamentary speaker, Marketa Pekarova Adamova, hopes that putting “the country in order after Babis’s devastating rule” by getting to grips with the fourth wave of the COVID-19 and inflation should do the trick.

Plans to deal with the pandemic were discussed on November 24. Fiala has promised that schools will not be shut at any point during his government’s term, which looks like making him a potential hostage to fortune. Incoming health minister, Vlastimil Valek, from Adamova’s party, ruled out compulsory vaccinations or a general lockdown. Restrictions on the unvaccinated using services and attending events will also be lifted.

Meanwhile, the pandemic action plan looks vague. Save for expanded testing and better management of health system resources, the main tactic appears to be to persuade the 40 per cent or so of the country who are still holding out to get a jab.

The goal, the incoming government says, is to learn to live with the virus without losing freedom.

The five parties have other pressing issues on which they’re close, and that should help to keep the parties pulling in the same direction for the meantime, agree analysts.

One of the very first items on the coalition’s list is to pass a new budget for 2022. The current plan targets a deficit of 377 billion koruna (14.8 billion euros), equal to the record-high shortfall recorded in 2020 due to the economic support required during the pandemic.

ODS is due to take control of the Finance Ministry and Fiala has spoken of slashing the deficit to below 300 billion koruna. That’s seen as ambitious, but even the Pirates are on board.

The incoming government also wants to set up a special fund – financed by new debt to avoid raising the deficit – to provide support to businesses during the fourth wave of pandemic by the end of the year. Action on the energy price crunch and spiralling inflation is also needed, it points out.

The confusion that reigned over foreign policy under Babis, who allowed Zeman’s pro-Russian and Chinese rhetoric to endure, also looks due to end, with all five parties keenly supporting the coalition agreement’s call for Czechia to reiterate the EU and NATO as cornerstones. The accompanying pledge to resurrect the humanitarian approach laid down by Vaclav Havel, the country’s revered first president, may yet prove somewhat naïve, but enjoys full support for now.

That’s likely to mean a sterner approach to the longstanding efforts of Moscow and Beijing to secure influence. “I don’t see any significant Russia or Chinese investment coming to Czechia now,” says Faktor.

At Masaryk University, Professor Lubomir Kopecky suggests that Czechia’s image among its EU and NATO partners should get a boost as its foreign policy stance becomes clearer on such issues.

Yet the deep divisions between the five parties remain a risk even on such big-ticket items, and some cracks are already visible. There are hints, for example, that Czechia’s relations with the Visegrad Four group could prove tricky.

Some of the parties in the coalition would like Czechia to distance itself from Hungary and Poland, whose illiberal front has earned the V4 a reputation as a troublemaker in Brussels. But ODS sits in the same European Parliament political grouping as Poland’s ruling Law and Justice (PiS) party, while its conservative and eurosceptic wing largely admires Hungarian Prime Minister Viktor Orban.

With that in mind no doubt, the coalition agreement expressly states that the V4 should remain key for the Czechs. However, Mikulas Bek, the proposed new EU affairs minister from Stan, has called the regional group “overrated” and pledged to “talk to the prime minister” about the issue.

This illustrates another worry: too many cooks. In his newly created post, Bek’s remit will overlap with the prime minister’s lead on EU issues. Assuming Lipavsky survives Zeman’s assault, Czechia would have three ministers from three different parties trying to deal with Brussels and EU partners.

Still, the trio should have the chance to get their act together when organising Czechia’s EU presidency, which will kick off in July 2022. Again, the need for haste should help. Babis has largely ignored the topic, meaning preparations are unorganised and underfunded.

“Everyone is scared of a repeat of 2009, when Czechia’s EU presidency was accompanied by government collapse, and so this will help bury differences,” Faktor hopes.

Keeping the show on the road

However, once these urgent issues are out of the way, likely within a couple of years in office, the danger is that the divisions between the five parties will start to emerge – albeit, the weakness of the Pirates, which won only four seats at the election, may help to keep a lid on the problems.

“It’s really more of a case of ‘when’ rather than ‘if’ some of these difficult issues come up to challenge the coalition after a while,” says Faktor.

While Fiala has surpressed it, ODS has a staunchly eurosceptic wing. Yet Top 09 and the Pirates are keen advocates of adopting the euro. It seems likely that a compromise would see some preparations for the single currency, even if there’s little chance that the euro will replace the koruna in the next four years.

As the two junior parties start to mull their prospects for the next scheduled vote in 2025, it’s possible they’ll also think about knocking heads with the KDU-CSL and ODS over social issues such as gay marriage.

Meanwhile, the new government’s approach to the EU’s Green Deal and the energy transition is likely to be highly disappointing for the more liberal parties in the coalition, analysts suggest. While the style will change, with Babis’s bitter rhetoric against Brussels’ climate efforts condemned to the past, most predict that action will be limited and business will largely dictate policy as usual, save for a little progress in agriculture.

All of which has few betting on the new government’s future. “It doesn’t look very stable,” says Kopecek. “It’s very unclear if this cabinet will survive a whole term.”

That suggests that long-term priorities, which include desperately needed educational and pension reform as well as the digitalisation of the state, will be tricky to achieve.

Keeping these divisions on ice will depend crucially on Fiala, as the leader of both the cabinet and the party that is strongest and furthest right of the coalition.

The former university professor performed admirably during the election campaign to banish potentially problematic issues and keep the anti-Babis bandwagon on the road. Yet whether he can retain his carefully crafted image as the voice of reason in Czech politics when he’s in the hot seat remains to be seen.

On the one hand, Fiala is understood to hold staunchly conservative social views that could see him clash with coalition and EU partners. But at the same time, relatively little is really known about his private life or views, despite his having led ODS since 2014.

“He is very conservative, but definitely not strongly eurosceptic,” asserts Kopecek. “He wants to be very active towards Brussels and definitely does not want to go same way as [Polish PiS leader Jaroslaw] Kaczynski or Orban.”

“Overall, he’s a very good mediator who can do a lot to keep the government together,” the analysts concludes.